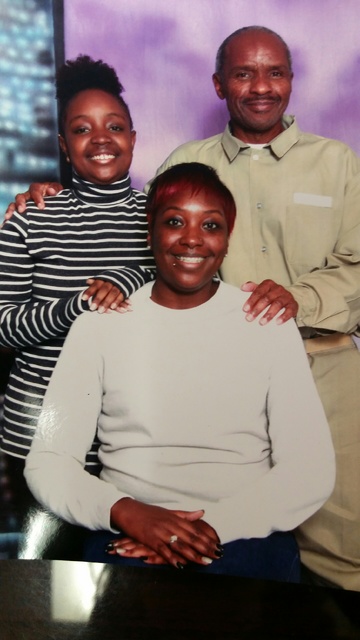 Aldes Brooks, 32, poses with her father, Donald Brooks, 63, inside the Atlanta Federal Penitentiary, where the man has been behind bars for nine years. The Brooks family learned on May 5 President Barack Obama granted the inmate clemency after being sentenced in 2002 to life in a federal prison without the possibility of parole on conspiracy and drug trafficking charges.

http://lagrangenews.com/wp-content/uploads/sites/37/2016/05/web1_20160510_181540-1.jpegAldes Brooks, 32, poses with her father, Donald Brooks, 63, inside the Atlanta Federal Penitentiary, where the man has been behind bars for nine years. The Brooks family learned on May 5 President Barack Obama granted the inmate clemency after being sentenced in 2002 to life in a federal prison without the possibility of parole on conspiracy and drug trafficking charges.

Donald Brooks is surrounded by two of his 28 grandchildren: Zikei Brooks, 12, left, and Christian Brooks, 15, right. Aldes Brooks said her sons are excited their grandfather will be coming to live with them.

http://lagrangenews.com/wp-content/uploads/sites/37/2016/05/web1_20160510_181037-1.jpegDonald Brooks is surrounded by two of his 28 grandchildren: Zikei Brooks, 12, left, and Christian Brooks, 15, right. Aldes Brooks said her sons are excited their grandfather will be coming to live with them.

WEST POINT — After spending almost 14 years behind bars in a federal penitentiary, Donald Brooks, 63, of West Point will soon be reunited with his family in their Troup County home.

Brooks was granted clemency by President Barack Obama on May 5. He was serving a sentence of life in prison without the possibility of parole for nonviolent drug offenses.

For his daughter, Aldes Brooks, the news meant the end of a decade-long battle to set her father free.

“It’s just so unbelievable. I don’t think I’ve eaten since Thursday,” she laughed. “I’m so thankful. My dad means the world to me.”

Donald Brooks’ lawyer called her that night and gave her the good news. The White House confirmed President Obama’s decision to commute her father’s prison sentence on Friday via email.

“You forget about people in these small towns. For someone in West Point to be granted clemency? I just couldn’t believe it. It’s a dream come true … the only other exciting thing was my children’s births,” Aldes Brooks said.

She was a 19-year-old, single mother in 2002 when she received another phone call that changed her life forever.

“I was at work … and someone said, ‘The Feds are at your house,’” she remembered. “I got there and they’re searching the house. They found nothing.”

While out of the game at that time, Aldes Brooks said her father was caught with drugs and arrested on felony charges twice before, once in 1989 and again in 1991.

Both times Donald Brooks pleaded guilty and was given five years’ probation, she said.

Though nothing was found in the Brooks’ West Point home, federal agents tied the man to a cocaine and crack cocaine drug distribution operation throughout Georgia and Alabama.

Investigators arrested her dad that day, she said. His bond was set at $1 million.

Federal prosecutors used Donald Brooks’ prior drug convictions against him and asked for mandatory minimum sentencing. That meant if he was found guilty by a jury, he would receive a blanket sentence for all the charges against him and the judge would have no say in how much time he would serve behind bars.

He was given the option of pleading guilty and receiving some prison time or taking his chances at trial, his daughter said. He chose to place his fate in the hands of 12 jurors.

Donald Brooks appeared in federal court in August 2002 and was found guilty.

He was sentenced two months later to life without the possibility of parole in a federal prison. He was 50 years old.

Aldes Brooks was stunned and confused.

“I remember asking his lawyer, ‘So how many years is that?’ He said, ‘Life means life,’” she recalled. “I still didn’t understand, so I asked, ‘Is my dad is never getting out?’ His lawyer said no, but promised to appeal the sentence.”

Her father’s lawyer appealed the case eight times and was always turned down, Aldes Brooks said.

Meanwhile, she began a battle of her own to free her father. She said she wrote hundreds of letters to state senators, governors, members of Congress and the Clemency Project 2014. The group, comprised of lawyers and advocates, immediately responded and asked for more information about her father’s case.

“It’s been a journey,” she said. “I always said I didn’t want my dad to die in prison. I couldn’t even get life insurance on him or anything because he was in prison.”

She also wrote President Barack Obama every six months in hopes the most powerful man in the United States would commute Donald Brooks’ sentence and let him come home.

Her letters and prayers were answered last week. Donald Brooks will finally walk out of the federal prison doors for good on Sept. 2.

“My dad is almost home. He and my three children are going to be under one roof,” the daughter exclaimed excitedly. “We won’t have to visit him in prison or eat out of a vending machine for Christmas … we’ve been going through this for nine years.”

She said her dad knows President Obama granted him clemency and he will soon be home with his family. The elder Brooks is now 63 years old, but Aldes Brooks said he already has big plans for his new life outside of prison.

“When he heard the news, he said ‘Thank God.’ … He was glad that Obama was president and that it was no one but God that freed him. He gives glory to God,” she said. “He’s ready to get out and tell his testimony. I think he has a lot to say to the younger generation. I look forward to see how he’s going to be a positive influence in my boys’ lives. My oldest son is so excited that his granddad is going to be there for his football games.”

Donald Brooks will also have a chance to reunite with nine of his 11 children, 28 grandchildren and four great-grandchildren.

Aldes Brooks said sadly one her sisters and one of her brothers died while their father was in prison. He watched their funerals on DVD.

When he moves in with his daughter and her three children, she wants him to feel comfortable and stay as long as he wants, so she is now looking for a new home with an extra bedroom somewhere in the Callaway High School district.

Most importantly, Aldes Brooks hopes the community learns the deeper message behind her father’s incarceration — and her battle to set him free.

“I wanted to share with the world there is hope,” she said. “People make mistakes, but they do deserve second chances. My father does take responsibility for his bad decisions, and now he wants to make things right.”

All the donations will help the 63 year old re-assimilate back into society and provide funding for clothing, transportation, food, administration fees and a license reinstatement fee.