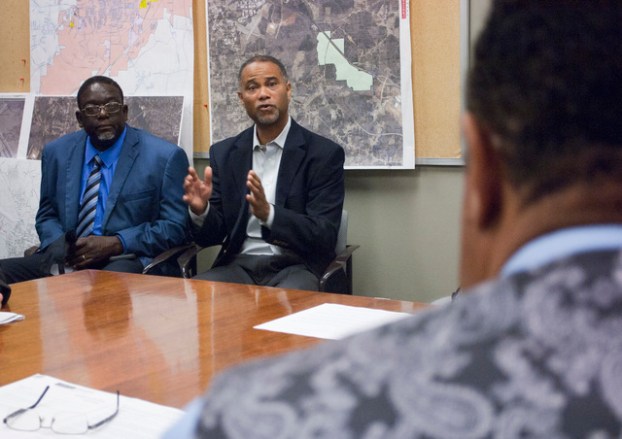 Paul Robinson, center, of Vantage Development speaks to City Council on Tuesday about a plan to improve the LaGrange Housing Authority’s complexes. The $12 million plan would be funded mostly through tax credits and could begin by the end of the year.

http://lagrangenews.com/wp-content/uploads/sites/37/2016/05/web1_LinearPark.jpgPaul Robinson, center, of Vantage Development speaks to City Council on Tuesday about a plan to improve the LaGrange Housing Authority’s complexes. The $12 million plan would be funded mostly through tax credits and could begin by the end of the year.

LaGRANGE — City Council on Tuesday committed $600,000 to the LaGrange Housing Authority’s plan to raze some of the Benjamin Harvey Hill Homes on Whitesville Road and replace them with a park.

The commitment is 5 percent of a planned $12 million renovation and new construction project, and the pledge increases the competitiveness of a tax-credit application by the housing authority to the Georgia Department of Community Affairs. The application is due in June and a decision could come from DCA by December. Council approved the funding in a 5-1 vote with Councilman Nick Woodson of District 1 opposed.

Woodson said he was opposed to the plan because of confusion about the cost. He said he initially thought the request was for $300,000 and that another private source would contribute the other $300,000. He said he wanted more time to consider the request.

The multiphase plan calls for renovation of the Lucy Morgan homes to begin in August, according to Paul Robinson of Vantage Development, which is partnering with the housing authority. The first phase is slated to include the rehab of 85 Lucy Morgan apartments.

Phase two of Lucy Morgan will rehab an additional 89 units, performing the same upgrades as phase one. Phase two is expected to begin in January.

The Ben Hill Homes, which were built in the 1950s, will see the most significant face lift under the plan. The proposal calls for building 70 new housing units on an 11-acre vacant strip of land owned by the housing authority on Whitesville Road across from Mobile Home Drive.

If the tax credits are approved, phase one of the Ben Hill project is expected to begin in April. The new units would house low-income seniors 55 and older. Once built, tenants would move in and about 15 of Ben Hill’s existing apartment buildings that face Whitesville Road would be torn town to make room for the park. The park would be lined with trees and landscaped, and replace about 15 buildings and face Whitesville Road.

The project would be paid for using low-income housing tax credits, tax-exempt bonds and other funds, both in the form of grants and existing housing authority capital. The plan calls for air-conditioning overhauls, replacement of floor and interior finishes, appliance upgrades and sewer maintenance.