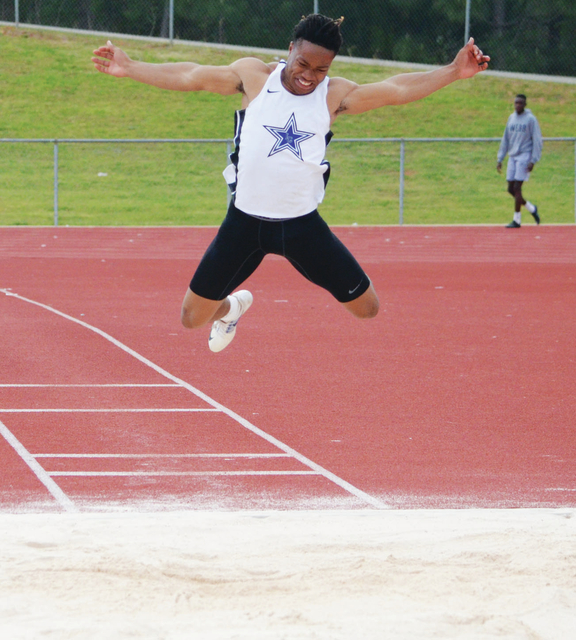 LaGrange’s Jeremiah Wright goes all out during the triple-jump competition at the Region 1-AAAAA track meet. Wright and teammate Sam Bowie will participate in the state finals in Jefferson. Kevin Eckleberry | Daily News

http://lagrangenews.com/wp-content/uploads/sites/37/2016/05/web1_LHS-wright.jpgLaGrange’s Jeremiah Wright goes all out during the triple-jump competition at the Region 1-AAAAA track meet. Wright and teammate Sam Bowie will participate in the state finals in Jefferson. Kevin Eckleberry | Daily News

LAGRANGE – Jeremiah Wright will look to finish his high-school sports career with a bang.

Wright, a senior at LaGrange High, will compete in the triple jump at the state track meet in Jefferson today, and if he finishes sixth or higher, he’ll earn a place on the podium and return home with a medal.

LaGrange’s Sam Bowie will cap his phenomenal running career on Friday when he competes in the 3,200-meter run.

Wright’s journey to Jefferson began at the Region 1-AAAAA track meet in Harris County when he finished second, and that qualified him for the state sectional at Starr’s Mill High School.

Needing to finish eighth or better at the sectional to make it to Jefferson, Wright delivered a jump of 45 feet, two inches, and that gave him a stellar third-place finish.

Now Wright, along with the 15 other top triple jumpers in Class AAAAA, will compete one more time.

Wright has saved his best jumps for the most important competitions of the season.

His best effort came at the region meet when he jumped 44-10 which was good enough for a runnerup finish, and he improved on that by eight inches at the state sectional.

Wright was also a standout football player at LaGrange, and he had a big senior season from his linebacker position while also getting some playing time at running back.

For Bowie, competing at state is nothing new.

This will be his fourth trip to Jefferson, and he has never finished lower than 10th in any of his races, and he has won four medals.

In each of the past three years, Bowie participated in two events at state, but this year he’ll only be competing in the 3,200-meter run.

It’s an event Bowie has excelled in this year, and he’s coming off first-place performances in the region meet and the state sectional.

Also this season, Bowie won the 3,200 at the Taco Bell Classic with a personal-best time of 9:24, which was also a school record in that event.

Bowie will have his hands full trying to chase down Jake Shewbert of Flowery Branch, who has been Class AAAAA’s top 3,200 runner this season.

Shewbert, who finished third in the 3,200 last year and won an individual cross-country title last fall, had a blistering time of 9:06 in winning his region meet.

“He’s a good friend with me,” Bowie said. “We’ve been talking about state, and he’s going to try to break nine minutes. I was like, more power to you. I think he’s going to get it. I hope he does, actually.”

Bowie has had plenty of success in Jefferson over the years.

Bowie has also had ample success in cross country over the years, and he finished as high as sixth as a sophomore.

After graduation, Bowie will be heading to Georgia Tech to be a distance runner.