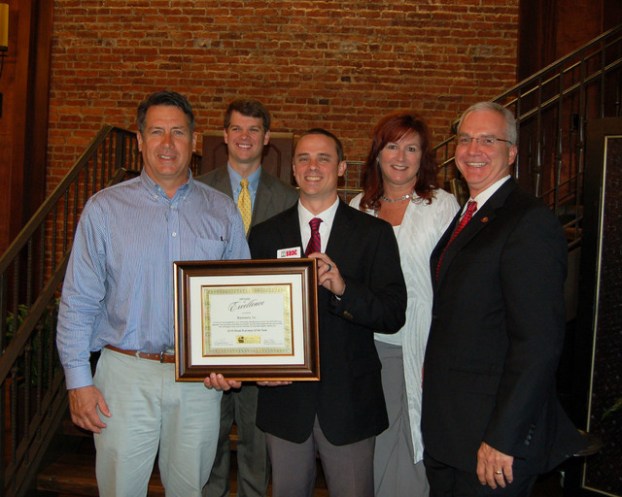 LaGRANGE — Three organizations were recognized as Small Business of the Year winners during the LaGrange-Troup County Chamber of Commerce Early Bird Breakfast Tuesday at Del’avant.

The small business of the year winner in Category 1 — for five or fewer employees — was Hillside Montessori of LaGrange Inc.

Hillside Montessori has generated a profit since its first day of business and has also raised more than $50,000 for capital expenditures and future expansion, stated Chamber officials. With double-digit enrollment growth in each of its four years of existence, Hillside has already exceeded initial projections and is now planning the addition of a middle school program in August 2017.

In Category 2 — six to 10 employees — Principle Construction West Georgia LLC was recognized for “leaving its mark across west Georgia and east Alabama while investing in the local economy,” states a Chamber press release. One example is a recent $1.2 million project where more than 80 percent of the materials were purchased locally and more than 80 percent of the subcontractors and vendors were locally hired.

The company expects revenue and profits to nearly double by the end of its third year in business. The company has also experienced no lost-time accidents.

Blackwell’s Inc. was the winner in Category 3 — 11 to 25 employees. Beginning in 1983, Blackwell’s has evolved from serving the local textile industry to working with customers in diverse industries across the Southeastern United States. Over the past five years the company has increased its capacity to serve by nearly 300 percent while working toward greater operating efficiencies and higher profitability, states a Chamber press release.

“Small businesses are the backbone of the American economy. I am grateful for the commitment each of the award-winners demonstrate to their customers and the community,” said Rhodes, who is also market president for Renasant Bank. “The recipients and their employees should be proud of their contributions to the local economy.”

More than 200 guests also heard from Lara Hodgson, president and CEO of NOW Corp., as she spoke on how to build a successful scaleup business.

Warning that “more businesses grow out of business than go out of business,” Hodgson continued the focus on small business with her presentation “Don’t Just Change with the Times … Change the Times!”

She encouraged the audience to focus not on success but instead on the significance of their accomplishments and offered five points to help people and organizations to begin thinking differently.

The first point is to consider it is not what someone knows, but what they notice that is most important. Secondly, organizations should explore the notion that when hiring employees, mindsets are more important than skill sets.

Hodgson continued by challenging the audience to consider that sometimes asking the right question is more important than finding the answer, then advised all attendees to not stop at “what,” but to ask “so what?” and concluded by suggesting that failure is not bad, but in fact, “failure is awesome!”

Each of the points stand on their own merit but, when taken collectively, are the framework for thinking differently, she said.

The next Early Bird Breakfast is scheduled for June 14 and will include a program looking back on the first school year at THINC College and Career Academy. For more information call 706-884-8671 or visit www.lagrangechamber.com.

Norm Fields Contributing columnist http://lagrangenews.com/wp-content/uploads/sites/37/2016/05/web1_Fields-Norm-CMYK-2.jpg Many times, when I write about various beliefs, you will see me refer to some... read more