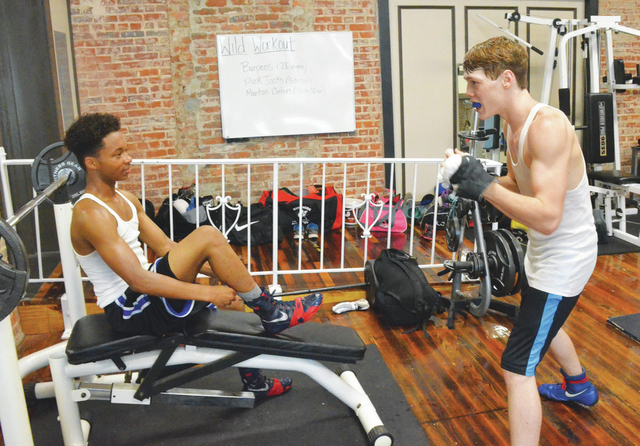 http://lagrangenews.com/wp-content/uploads/sites/37/2016/05/web1_boxing5.jpgBenjamin Gravitt works out at B2B Boxing as he prepares for the National Golden Gloves Tournament of Champions Kevin Eckleberry | Daily News

Vito Evans, wearing a mask designed to help him prepare for the higher elevation in Utah, works out as he gets ready to compete in the National Golden Gloves Tournament of Champions. Kevin Eckleberry | Daily News

http://lagrangenews.com/wp-content/uploads/sites/37/2016/05/web1_boxing6.jpgVito Evans, wearing a mask designed to help him prepare for the higher elevation in Utah, works out as he gets ready to compete in the National Golden Gloves Tournament of Champions. Kevin Eckleberry | Daily News

Benjamin Gravitt and Vito Evans with one of their “training partners.” Kevin Eckleberry | Daily News

http://lagrangenews.com/wp-content/uploads/sites/37/2016/05/web1_boxing3.jpgBenjamin Gravitt and Vito Evans with one of their “training partners.” Kevin Eckleberry | Daily News

LAGRANGE – There is that brief period, when he’s standing in the middle of the ring standing toe-to-toe with his opponent, when Benjamin Gravitt is aware of the moment, when he can feel the butterflies.

Once the bell rings and Gravitt begins trading blows, though, he’s ready to go.

“You hit gloves with the guy. That’s the most nervous part for me, just looking at the guy,” Gravitt said. “Once you get in there and start fighting, you just do what you’re trained to do.”

Gravitt, a 19-year-old graduate of Troup High, has been boxing for about five years, and thanks in large part to an uncompromising work ethic, he has enjoyed tremendous success in the ring.

The same goes for Vito Evans, a 16-year-old student at LaGrange High who has been climbing the ladder since he took up boxing a few year ago.

This weekend, the two men who train together with coach Randy Hardaway at B2B Boxing in LaGrange will be heading west to test themselves against some of the best amateur boxers in the country.

Gravitt and Evans will be competing in the National Golden Gloves Tournament of Champions in Salt Lake City, Utah.

They’ll fly to Utah this weekend, and the tournament gets under way on Monday and will last six days.

It will be Gravitt’s second appearance in the tournament, while Evans is making his debut.

Gravitt was in Las Vegas for last year’s Golden Gloves tournament, and he admits he was a bit overwhelmed by the situation.

“I went out there with nobody. I was nervous,” Gravitt said. “I pretty much choked when I went to nationals. I was intimidated. So I’m looking forward to going back and showing them what I’ve got.”

After Gravitt returned from Las Vegas, he did what he’s always done.

He went to the gym, and he worked his tail off.

Gravitt has always known that to reach the goals he has set for himself, there can be no shortcuts.

Champions, he believes, are created in the gym during those strenous training sessions.

“The hard work’s in the gym,” Gravitt said. “The easy part is the fight. You just have to apply everything you’ve learned.”

Gravitt said the training isn’t just about being fast and strong, but it’s also about being at your best mentally.

“You get mental blocks sometimes,” he said. “They say it’s 90 percent mental, and it is. If you don’t think you’re going to win the fight, you probably ain’t. You’re going to have doubts, and you’re going to be nervous. You just take that energy and use it.”

As for Evans, he isn’t the first member of his family to try out boxing.

He’s got a younger brother who put on the boxing gloves before he did, so he thought he’d give the sport a try.

“At first, before I started here, my little brother did it,” Evans said. “I was doing football and wrestling. I came here, and I looked at it, and I thought it was easy.”

Evans found out soon enough that’s anything but easy, and he has had plenty of growing pains, but he has never regretted his decision to climb into the ring.

“I fell in love with it, and I’ve been doing it ever since,” Evans said.

When Gravitt was 14, his first inclination was to try mixed martial arts, but he ended up taking up boxing instead after he began working with Hardaway, his coach.

“I got in in to do MMA. I wanted to do the UFC fighting,” Gravitt said. “That’s what this gym used to be. The people that owned it, they would (bring Hardaway in) to come spar with the MMA guys. I was too young to do MMA, so I just thought I’d do boxing. I got into boxing, and I never did MMA. I love the sport.”

It’s not an easy life.

To succeed at a high level requires an intense committment of time and effort, and neither Gravitt or Evans has shied away from that.

“Boxing makes you make sacrifices. It’s crazy how much time you spend on it,” Gravitt said. “I’m working and boxing. With (Evans) it’s school and boxing. It’s hard man. It’s your life. You just have to balance it out. A lot of people can’t do that.”

Gravitt said one of the great things about boxing, or any sport, is the outlet it provides for young men who might otherwise spend their free time in less productive ways.

“This sport saves your life, too,” he said. “It’ll mess your brain up if you get hit too much, but it’ll save your life. I used to get in so much trouble before I got in here. All the nights we spend in here, there ain’t no telling what I’d be doing.”

Gravitt and Evans both love the one-on-one aspect of the sport.

They have a coach to help prepare them, but once they step into the ring, there is no one else.

“It’s just you,” Evans said. “You just do what you’re supposed to be doing, put it all on the table. You have your coach giving you instruction, but you do it by yourself.”

Added Gravitt: “It’s not like football. If you lose, you can’t blame nobody else. It’s all on you.”

For the near future, Gravitt and Evans have different goals.

Since Evans is only 16, it’ll be two more years before he’s eligible to turn pro, but that’s not something he’s thinking about right now.

Evans’ number one goal, what drives him, is the chance to be an Olympic boxer, and he’ll do what he can to make that a reality in 2020.

“I could turn pro in two more years if I wanted to, but I want to wait,” he said. “I want to go to the Olympics.”

Gravitt is old enough to go pro now, and he’s looking forward to representing his home gym when he starts fighting for a living.

“Hopefully, I’ll be the first one to go pro out here,” Gravitt said. “I’ll still train out here though.”

Both men, whether they’re boxing as an amateur or a pro, are committed to improving, to being the absolute best they can be.

“That’s what drives us,” Gravitt said. “We just want to do better.”