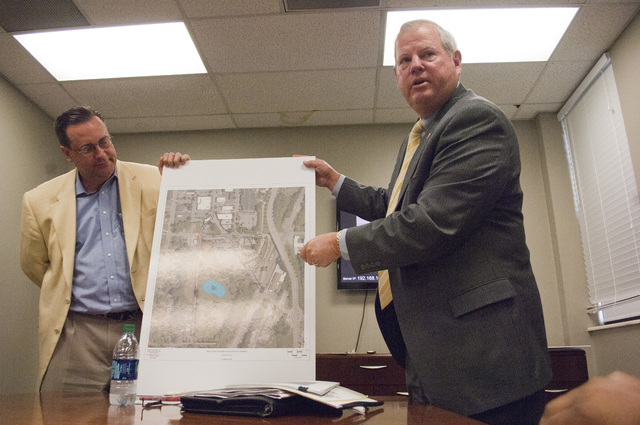 This plan shows the proposed realignment of Bull Street and other proposed developments in downtown LaGrange.

http://lagrangenews.com/wp-content/uploads/sites/37/2016/05/web1_DowntownPlan.jpgThis plan shows the proposed realignment of Bull Street and other proposed developments in downtown LaGrange.

LaGRANGE — The Callaway Foundation has big plans for the south end of downtown LaGrange.

The foundation, which has already poured more than $50 million into the city’s center, this week announced plans to redevelop parcels of land south of Byron Hurst Street extending to the railroad tracks that cross Main Street.

A public park and pond, apartments, outdoor event space and a tourist attraction are all on tap, according to Speer Burdette, president of the Callaway Foundation, which owns the land.

“That entrance from the south end of our town, down by the railroad tracks, is one of the main entrances to our downtown,” Burdette said. “The (former) Westbrook (Tire) building, which we own, is in dire need of a project.”

He was coy about exactly what that project is, but said the foundation has already granted $1.5 million to the Downtown LaGrange Development Authority for the rehab of the Westbrook building to “create a venue here that we think will promote tourism for our area.”

A skateboard park, which city planner Leigh Threadgill is already eyeing, might also fit into what Burdette calls “The South Gateway” project. An outdoor plaza for small events is in the works, and the potential for new office space also exists, Burdette said.

But the project doesn’t stop there.

The foundation is asking the city of LaGrange to realign Bull Street and change its awkward intersection with Main and Byron Hurst streets near the site of the under construction District 4 Public Health office.

LaGrange Pool and Spa is already relocating to a lot at the corner of Ridley and Mitchell avenues, and the Bull Street property has been sold to the Callaway Foundation.

David Brown, the city’s chief roads engineer, said once the plans are finalized, the city could begin survey and design work and the realignment’s construction could begin within a year. Brown added that city engineers were considering changing the intersection of Byron Hurst, Main, Bull and East Depot streets even before the Callaway Foundation approached the city with its plan.

“We’d been looking previously about doing something with that crazy intersection,” Brown said. “One of the problems is you’ve got five streets in one location. We were looking at designing a roundabout, and we knew there was a need to do something with Bull Street to do something about it.”

To build the realignment, the Callaway Foundation would donate the right of way to the city, and in return, once the realignment is complete, the former location of Bull Street would be deeded from the city to the Callaway Foundation. The foundation would use the land to “square up” the Loy’s office supply building and turn it into a mixed-use development.

“(This is) an opportunity for something significant for our downtown,” Burdette said. “Really, the thinking is, ‘How can we put something here that would compliment Carmike theater?’ We’re really thinking about our youth and our kids. The kids come downtown to the movies and when they get done, they really don’t have anything to do afterward.”

He likened the new planned development at the south end and Sweetland Amphitheatre to the north as “book ends” that will anchor the city’s downtown.

There are also next-phase plans to possibly build townhouses to the west of the Westbrook building, which along with the planned apartments, Burdette said would help foot traffic downtown and energize local businesses.

The time frame of the project is still up in the air, but “we’re ready to go,” Burdette said. “We’re ready to begin today. There are a few little things, but the obvious first step is the relocation of Bull Street. Once that gets laid out and put into place, that allows the remaining part of this to more forward.”

He said the renovation of the Westbrook building is already moving forward, and the foundation’s board has approved the project.

“We’ve put the contract out to bid for the renovation and they’re in the value engineering stage,” he said. “We’re working with the folks who are going to put the business in there. I can’t exactly give a time frame, but it’s actively underway.”

He said the announcement about what type of business will go into the Westbrook building would be announced once all the details are finalized.