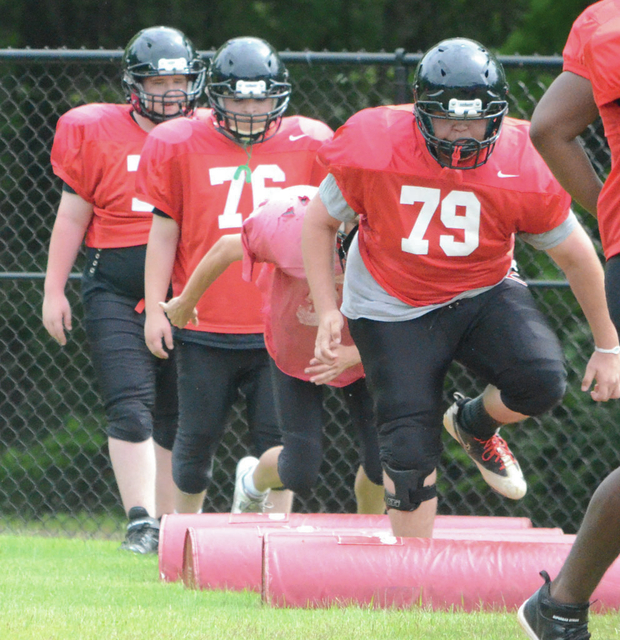 The Callaway Cavaliers will wrap up spring practice with a scrimmage today. Kevin Eckleberry | Daily News

Callaway’s football team will put the wraps on its spring-practice period with an intra-squad scrimmage today, with the action set to get under way at 5 p.m.

The scrimmage will be held on Callaway’s practice field, which is right next to the field house.

Callaway began spring practice two weeks ago, and head coach Pete Wiggins said it was good to get out on the field.

“The kids have been working hard since Jan. 6, and to finally get out here on the field has been a lot of fun,” Wiggins said.

The scrimmage will give the returning starters, as well as the players hoping to crack the lineup, a chance to show what they can do.

Callaway has some major holes to fill coming off a successful season that included a region championship and a spot in the second round of the state playoffs.

Among the players Callaway is having to replace is running back Cedric Maynard, who ran for nearly 2,500 yards last season.

Callaway has plenty of talented players returning, though, including quarterback Braylon Sanders, who is heading into his senior year.

At last year’s spring game, Sanders was still learning the ropes at quarterback after starring at wide receiver as a sophomore, but he’s a veteran at the position now and should be poised for a big season.

The Troup Tigers completed their spring practice two weeks ago with a scrimmage in West Point as they head into their second season under head coach Tanner Glisson.

Troup held its scrimmage in West Point, and it capped a successful two-week practice period, especially since everyone stayed healthy.

“Overall, nobody got hurt, so that’s a big plus,” Glisson said. “It always is. That’s been our story through the spring. We haven’t got anybody injured, so that’s good.”

The LaGrange Grangers are not having a spring practice, and because of that they’ll be able to play two preseason games in August, which head coach Dialleo Burks felt would better serve the program.

Callaway, LaGrange and Troup will all begin their summer conditioning programs after the school year ends.