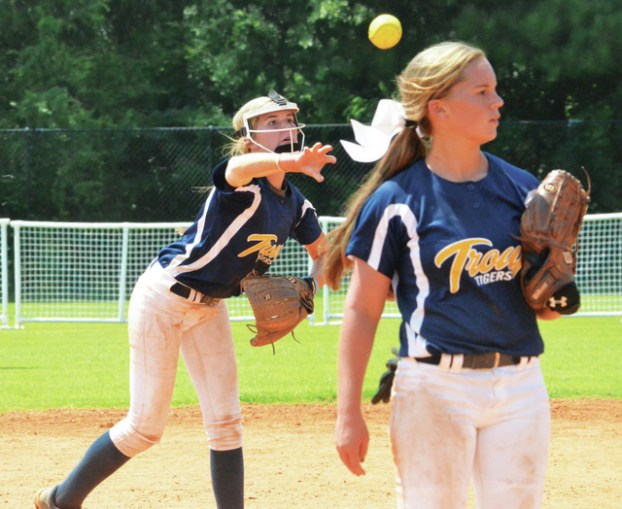 Change at the top for Lady Tigers

Troup’s Maddie Weathers slides into second base during a game last season. Weathers is one of the returnees who’ll be playing for new head coach Mason Brackett. Kevin Eckleberry | Daily News

http://lagrangenews.com/wp-content/uploads/sites/37/2016/05/web1_Troup-weathers2.jpgTroup’s Maddie Weathers slides into second base during a game last season. Weathers is one of the returnees who’ll be playing for new head coach Mason Brackett. Kevin Eckleberry | Daily News

Troup’s Kayla Lane, who had a standout 2015 season, will be a sophomore this coming softball season. Kevin Eckleberry | Daily News

http://lagrangenews.com/wp-content/uploads/sites/37/2016/05/web1_Troup-lane.jpgTroup’s Kayla Lane, who had a standout 2015 season, will be a sophomore this coming softball season. Kevin Eckleberry | Daily News

LAGRANGE – Mason Brackett has been a coach on the Troup High softball team since the 2014 season, so he’s familiar with the players, and vice versa.

He’s hoping that will help make his transition to head coach a smooth one.

During the 2014 and 2015 seasons, Brackett was an assistant coach under Blair Shimandle.

Shimandle won’t be returning as head coach, and Brackett has been promoted to fill that position, and he led the team through spring tryouts on Thursday.

Brackett said having the two years to get acquainted with the players, and how each one of them responds to different styles of coaching, was enormously helpful.

“You get to know the girls,” said Brackett, who is also an assistant coach on the baseball team. “You get to know their personalities, how you can interact with each one. You have to handle them all a different way. Some respond better to certain types of motivation.”

Brackett said close to 20 players turned out for tryouts on Thursday, and one of his main tasks is finding replacements for a talented group of seniors.

Among the five seniors who graduated were three players, Amber Arnold, Hanna Lane and Libby Wheeler, who’d each been starting for most of four years.

The good news is there are a number of talented and experienced players returning, including catcher Maddie Weathers, who hit .431 last season as a sophomore

Kayla Lane hit .353 during her freshman season and was a standout on the mound as well, and Madison McCartney, Kinley Stanford, Abby Taylor and Andrea Nix were among the other underclassmen who were major contributors last season.

Brackett said he’s getting a summer plan together that he hopes will help have everyone ready to hit the ground running when preseason practice begins in August.

Typically, teams in Georgia have about one week of practice before it’s time to start playing games.

“We’re putting together, me and my assistants, a summer workout plan,” he said. “We’re just trying to get them ready for August.”