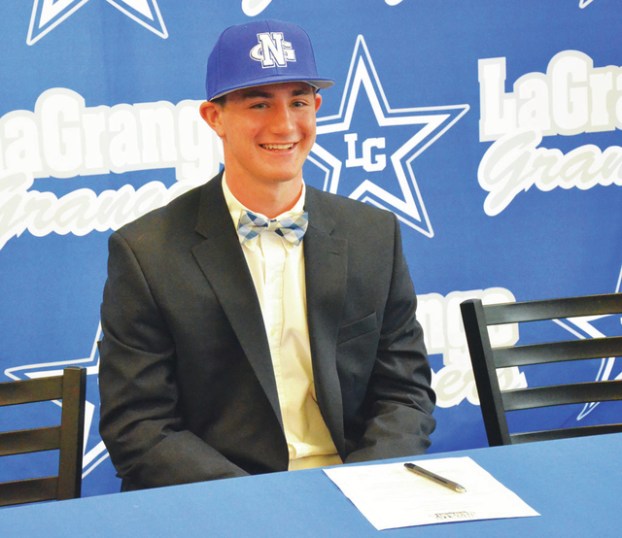 She’s heading for the Sunshine State

Troup High’s Jesse Copeland is joined by teammates on the soccer team as she signs a letter of intent to play soccer at Johnson University in Kissimmee, Fla. Kevin Eckleberry | Daily News

http://lagrangenews.com/wp-content/uploads/sites/37/2016/05/web1_signing2.jpgTroup High’s Jesse Copeland is joined by teammates on the soccer team as she signs a letter of intent to play soccer at Johnson University in Kissimmee, Fla. Kevin Eckleberry | Daily News

Not only is she getting an opportunity to play college soccer, but she’ll be able to do it close to members of her family, including her mother Anna Copeland.

On Friday in the Troup High cafeteria, Copeland signed a letter of intent to play soccer at Johnson University in Kissimmee, Fla., which is right in Mickey Mouse’s backyard.

“My mom, my family’s really close to where I’m going,” Copeland said. “She’s looking forward to me being 45 minutes away from her.”

Playing college soccer isn’t something Copeland has given a whole lot of thought to, so she was a bit surprised when she was contacted by the Johnson coach.

“A long time ago, I’d done this thing online. I guess he just found it,” Copeland said. “And he’s close friends with Point University. Not sure if they talked or not.”

Her initial reaction was, “is this real,” and when she realized it was she did some digging and found out what she could about Johnson University and she “was really interested.”

Copeland said her conversation with the coach at Johnson helped convince her that heading to Florida was the right thing to go.

“The coach contacted me, so I talked to him quite a long time on the phone,” Copeland said. “I’m pretty excited and grateful that I’ll have this opportunity.”

Copeland had a big turnout for her signing celebration on Friday.

While her mother wasn’t able to make the trip up from Florida, her father James Copeland was there by her side.

Also there to enjoy the moment with Copeland were many of her teammates on the soccer team, as well as a handful of other friends from the school.

While Troup’s girls’ soccer team struggled to find success the past few years, Copeland said she’s grateful for the time she had with her teammates.

“It means the world to me,” she said. “There are a lot of problems that happened on the team over the four years. The ones that showed up, we’re like family, and they’re like sisters. I know I can count on them, and the same for them. It means a lot.”

Copeland, along with the other seniors at Troup, will be putting on the cap and gown in a couple of weeks for graduation.

It’s a fairly daunting thought to know she’s about to make such a major transition in her life, but she’s ready for it.

“It’s pretty crazy how fast it’s gone,” she said. “I can’t believe we graduate in 14 days. It’s scary, but I’m looking forward to it.”

Copeland is especially eager to join her new team and begin her college soccer journey.