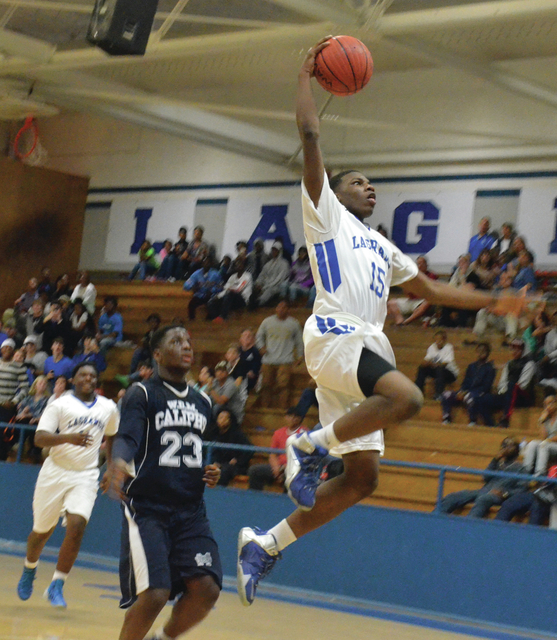 With LaGrange’s coaches looking one, a pair of Gardner Newman players go up and fight for the ball. Kevin Eckleberry | Daily News

http://lagrangenews.com/wp-content/uploads/sites/37/2016/05/web1_LHS4-1.jpgWith LaGrange’s coaches looking one, a pair of Gardner Newman players go up and fight for the ball. Kevin Eckleberry | Daily News

It was with that in mind that Burks decided to change things up this spring.

He chose not to hold a spring practice for the high-school team, opting instead to play two preseason games in August, which he feels will better serve his players.

Burks and his fellow coaches were still leading a spring practice, though, it just wasn’t for high-school players.

For the past two weeks, the LaGrange coaches have been at Gardner Newman Middle School directing spring practice for the players at that school.

It’s part of Burks’ mission to help get the LaGrange and Gardner Newman programs in sync, and to help make the transition for the players coming to high school a smoother one.

“One of my main things is getting our programs in line, get our feeder school, our middle school, on the same page as us, doing the same base concepts as we’re doing,” Burks said. “And it’s just learning the guys.”

On Friday at the Gardner Newman football field, the players completed their two weeks of training with a spring game.

There was a nice crowd on hand, and there was even a band in the stands, giving the occasion more of a game-like atmosphere.

“They brought the band out. They wanted to treat it as a nice fundraiser, too,” Burks said. “It’s exciting, and you want that. You want them to be excited.”

The players were split into two teams, and they went at it for two hours, putting what they’ve learned for the past two weeks to the test.

Burks said the players were treated as if they were members of the high-school team.

“They practice just like we practice,” Burks said. “They went by the same rules. It was an eye-opener for some of them, but they caught on quick.”

Burks said it was a hands-on approach by the coaches during the practices, and during Friday’s game when they were on the field offering advice and encouragement.

“We broke it down, we got out there with them,” Burks said.

Some of the players who participated in spring practice will be eighth graders this coming school year, and they’ll lead the Gardner Newman team.

The current eighth graders, meanwhile, will be joining the high-school program in a couple of weeks, and Burks was glad to get a first-hand look at those soon-to-be Grangers.

One of those players who’ll be coming up is freshman quarterback Charles Crawford, who Burks calls a “hard-nosed kid.”

With Crawford and the other incoming Grangers, Burks said “our ninth-grade team is going to be really good.”

Burks is hopeful that by giving so much attention to the middle-school players, they’ll understand how much they’re appreciated.

“You never know when that flower’s going to blossom,” Burks said. “We want to make sure that we give them the attention they need, so that we can build a nice strong, healthy program.”

As for the players who’ll be back at Gardner Newman next season, Burks said there’s plenty of talent there as well.

“We’ve got a bright future if they stay together,” Burks said.