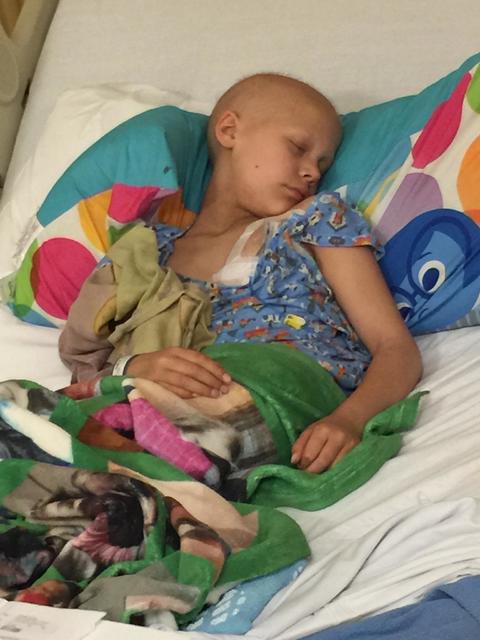 Gracie Smith, 9, poses with her mom, Summer. Following her liver transplant, Gracie will remain in ICU at Children’s Healthcare of Atlanta at Egleston for at least three days.

http://lagrangenews.com/wp-content/uploads/sites/37/2016/05/web1_IMG956366-1.jpgGracie Smith, 9, poses with her mom, Summer. Following her liver transplant, Gracie will remain in ICU at Children’s Healthcare of Atlanta at Egleston for at least three days.

Gracie Smith, 9, is sedated as she prepares to undergo a liver transplant. The LaGrange girl was diagnosed with stage IV liver cancer on Feb. 1, and her family received the call early Monday that doctors received a matching donor.

http://lagrangenews.com/wp-content/uploads/sites/37/2016/05/web1_Gracie1-1.jpgGracie Smith, 9, is sedated as she prepares to undergo a liver transplant. The LaGrange girl was diagnosed with stage IV liver cancer on Feb. 1, and her family received the call early Monday that doctors received a matching donor.

ATLANTA — At 3:30 a.m. Monday, 9-year-old Gracie Smith and her family’s prayers were answered with one simple phone call.

The girl, who has been battling stage IV liver cancer since Feb. 1, desperately needed a liver transplant.

Gracie’s mom, Summer Smith, said her daughter was placed on the transplant list four weeks ago after undergoing three rounds of brutal chemotherapy. The treatments caused Gracie’s hair to fall out, and made her nauseous and weak.

But the therapy also eradicated enough cancer cells and shrunk tumors to place the 9 year old at the top of the transplant list for six weeks.

Gracie had less than two weeks left before she would be taken off the list to start three more rounds of chemotherapy, Smith said. Then the phone rang.

“I heard it ringing, and I saw it was a Newnan number … I laid there … I think I was just startled by the phone ringing,” Smith remembered. “Then my mom called. They (transplant team) had just called her … so at 3:30 in the morning, they said, ‘We have a donor that is a match for her.’ So we packed up and headed to Atlanta.”

Summer, Gracie, family and friends camped out at Children’s Healthcare of Atlanta at Egleston.

Though the transplant phone call came early, both Gracie and her new liver still had to be prepped for a possible seven-hour surgery.

Smith said her daughter took the news in stride and only seemed worried about the surgery once before being wheeled back into the operating room.

“Her first reaction to me was, ‘It’s time. I’m about to be cancer free, mama.’ That was because we prayed every day that God would pick just the perfect liver for her at just the right time,” Smith said. “… Then there was some fear and anxiety when she thought of the pain of the operation and recovery … but when it was time. … She put her ‘fight face’ back on, she was brave and she showed her strength. Every time I think she’s going to fall apart, she shows so much strength. I always tell her, ‘When I grow up, I want to be just like her.’”

Gracie’s miracle donor will remain a mystery for at least one year, Smith said, though the transplant team did share a few details about that special person with her.

“… The donor was a child,” she stated. “They referred to (the donor) as a she — same age, same weight and same height. She was considered a ‘high-risk donor’ because she was on dialysis for her kidneys. Usually they don’t share any information, but because (the donor) was high risk, they shared that info with me. She lost her battle because of her kidneys, but the family donated the rest of her organs.

“It’s hard because I know a family is dealing with the loss of their child in order to save mine,” Smith continued. “I do plan on reaching out to that family one day in the hopes of saying ‘thank you’ for what they did.”

When the Daily News initially spoke with Smith, Gracie had been in surgery almost three hours — and was expected to have another four hours to go. This morning, Smith said the operation went well, and surgeons actually finished two hours ahead of schedule. Doctors removed all of Gracie’s ventilator tubes and said her blood counts looked “good,” which means the liver showed no signs of any blockages or leaks.

While still scared for her daughter, Smith said she would rely on her faith in God to carry Gracie safely through the recovery process. After all, only God could bring the little girl one of the greatest, belated gifts of all: a second chance at life just 16 days after her ninth birthday.

“… We knew that God was going to perform a miracle on her and we are thankful,” Smith said. “It’s still tough, seeing her fears and seeing her scared … but she has a lot of faith in God. She has such a strong, strong faith.

“We’re just so overwhelmed with all the love, support and prayers from our town for Gracie and our family,” she continued “We have prayers coming from all over the world … To see how much everyone has poured out into her, it has been amazing.”

Gracie will remain in the intensive care unit at Egleston after the transplant for at least three days. Smith said she will still need chemotherapy when she recovers from the surgery.