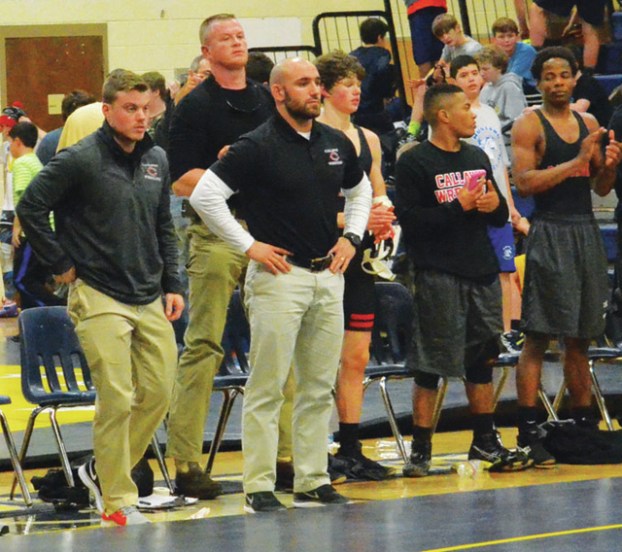 Callaway’s offense prepares to run a play during Friday’s spring game with running-backs coach Matt Neighbors looking on in the background. Neighbors, a Callaway High graduate, is in his first season on the coaching staff. Kevin Eckleberry | Daily News

http://lagrangenews.com/wp-content/uploads/sites/37/2016/05/web1_CHS-neighbors.jpgCallaway’s offense prepares to run a play during Friday’s spring game with running-backs coach Matt Neighbors looking on in the background. Neighbors, a Callaway High graduate, is in his first season on the coaching staff. Kevin Eckleberry | Daily News

Jason Boatman, left, is an assistant coach in wrestling and football at Callaway. Boatman is a Callaway High graduate, and he was a senior on the 2005 football team. Kevin Eckleberry | Daily News

http://lagrangenews.com/wp-content/uploads/sites/37/2016/05/web1_CHS-boatman.jpgJason Boatman, left, is an assistant coach in wrestling and football at Callaway. Boatman is a Callaway High graduate, and he was a senior on the 2005 football team. Kevin Eckleberry | Daily News

HOGANSVILLE – They’re happy to be home.

With two openings on his staff, Callaway head football coach Pete Wiggins targeted a pair of men he knows well since he coached both of them.

Wiggins offered coaching positions to Jamal Bruce and Matt Neighbors, and both men eagerly accepted, and on Friday afternoon during the school’s spring game, they were both out on the practice field they know so well.

Bruce is replacing Jason Sherrer as the defensive-line coach, and Neighbors is stepping in as the running-backs coach following the departure of Kurt Napier.

Neighbors was the quarterbacks coach at LaGrange High last season, and while he said that was an overwhelmingly positive experience, the lure of returning to his alma mater was too great.

“It’s a chance to go back where you played, and where you graduated from,” said Neighbors, who was a senior in 2005 when Wiggins took over as head coach. “Not to mention not only that, but coach Wiggins is someone who is a mentor to me. He’s somebody that I look up to. I couldn’t turn down that opportunity.”

Bruce, a 2010 Callaway graduate who enjoyed tremendous success during his time as a Cavalier, had his first coaching job at Eastside High in Covington last season.

Bruce said it was Wiggins who encouraged him to consider coaching and teaching as a career, and now that has become a reality.

“Coach Wiggins is a big part of it,” Bruce said. “I remember in college he kept telling me to go into education so I could come back and coach and teach.”

Wiggins will now have three men who played for him on his coaching staff.

In addition to Bruce and Neighbors, tight ends coach Jason Boatman is also a former Cavalier, and he was a senior on the 2005 team.

“I’m excited about Jamal Bruce and Matt Neighbors, and Jason Boatman’s been with us for awhile,” Wiggins said. “To see that youth come on board is exciting. And it’s guys that have played for Callaway. They’re good people, and the kids have responded to them very well, and we’re looking forward to the future with those guys.”

Neighbors was an assistant coach at Greenville before he was brought on as LaGrange’s quarterbacks coach last season, and he worked closely with LaPerion Perry, who had a sensational season.

When Neighbors accepted the position at Callaway, he said leaving LaGrange “was one of the toughest things I ever had to do.”

“I love those guys I worked with at LaGrange,” Neighbors said. “Coach (Dialleo) Burks, and coach (Jay) Floyd and all those guys, I loved working with them. Not to mention you’re giving up a shot to coach maybe one of the best players in the state (in Perry).”

“He taught me tons about the game in a short amount of time,” Neighbors said. “I’ll forever be thankful for what he did.”

Neighbors has no regrets, though, and he said he’s “loved every minute” of the time he’s spent at Callaway so far.

Neighbors enjoys working alongside not just Wiggins, but offensive coordinator Matt Napier and Kareem Douhne, who were both on the staff back in 2005.

“Me and (Napier) mesh real well together,” Neighbors said. “Of course me and coach Wiggins get along good, and coach Douhne, too. All those guys were just starting when I was graduating.”

During his first three seasons at Callaway, Claude Giddens was his head coach, and Wiggins was his position coach on the offensive line.

When Giddens stepped down following the 2004 season, Neighbors said the players were hoping Wiggins would get the promotion.

“I remember as players, we were rallying to get him there,” Neighbors said. “He was my position coach under coach Giddens for three years. I love him like a dad. I’m real close to him.”

Wiggins is grateful to have Neighbors and Boatman on his staff now.

Boatman, in addition to his football duties, is an assistant coach on the wrestling team.

“(Neighbors) and coach Boatman are really close, and have been for a long time,” Wiggins said. “They bring a lot of enthusiasm to our team. I’m excited about what coach Neighbors is bringing to our football team.”

Bruce arrived at Callaway as a freshman in 2006, and he was there when the program started to soar.

The Cavaliers were coming off back-to-back losing seasons when Wiggins took over, and they went 4-6 in 2005.

In 2006, the Cavaliers went 5-6, but they returned to the state playoffs following a two-year absence and had a strong showing in a 30-26 loss to Washington Wilkes in a first-round game.

The Cavaliers went 10-2 in 2008 and broke through for the first playoff win in school history, and they followed that up by going 10-3 in 2009 when Bruce was a senior.

That 2009 team remained Callaway’s most successful one until the 2013 team went 12-2 and made it to the state semifinals.

“It just started taking off,” Bruce said. “From my ninth grade year to my senior year, we just kept getting better and better.”

Bruce had a lot to do with that.

He was a dominant defensive lineman, and he went on to excel at Duke where he helped that program enjoy a drastic turnaround as well.

When Bruce was a junior, he helped Duke reach the ACC championship game and set a school record with 10 wins.

Bruce and the Blue Devils followed that up by going 9-4 in 2014, and they made it to a bowl game for a third straight season.

Bruce started every game his final two seasons from his defensive tackle position, so he was right in the middle of all the success.

“He played extremely well, and played in a lot of big ballgames for coach (David) Cutcliffe,” Wiggins said.

When Bruce started as a student at Duke in the fall of 2010, he didn’t set out to become a coach.

“It kind of happened as I went along,” he said. “I started out wanting to do computer science. I had a class on computer programming and hated it.”

Bruce then shifted his area of interest to education, and that’s where he felt at home.

“I took an education course, and I liked the tutoring and mentoring component of that,” he said. “I got more and more into it.”

Bruce said it has taking some time to adjust to coaching in high school after spending five years at Duke.

“I had to learn the way they did things on the high-school level, because it’s completely different with the rules, and less contact, less time, and things like that,” Bruce said. “And you also add the teaching aspect to it.”

While Bruce’s first day on the field was Friday for the spring game, he and Wiggins have been corresponding for awhile.

“Jamal, he and I have swapped a lot of messages over the last few months, just trying to familiarize him with what we’re doing and the players,” Wiggins said.

Wiggins has a lot of faith in Neighbors as well.

Wiggins showed how much trust he has in Neighbors when he made him the team’s recruiting coordinator.

Neighbors is the contact man for college coaches interested in Callaway players, and he also makes sure the players keep up with the academic side of the equation.

“Coach Neighbors is handling the recruiting,” Wiggins said. “He’s our recruiting coordinator, and he’s dealing with all the colleges, and working with the kids on ACT, SAT, signups, and just spending a lot of time with the guys about going on to the next level, and he’s doing a great job with that.”