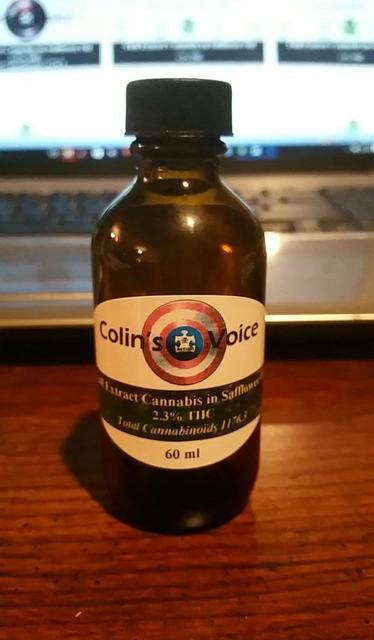 Dale Jackson poses for a photo with his son Colin.

http://lagrangenews.com/wp-content/uploads/sites/37/2016/05/web1_IMG_2324.jpgDale Jackson poses for a photo with his son Colin.

LaGRANGE — The battle over expanding the legalization of medical marijuana in Georgia may have already ended with the 2016 legislative session, but the fight continues every day for Dale Jackson.

He is on a crusade for his 8-year-old son Colin and countless other children like him who suffer from extreme forms of autism. They are not included on the state registry of people authorized to legally use cannabis oil under Haleigh’s Hope Act, or HB1, signed into law by Gov. Nathan Deal in 2015.

That meant Jackson and a small group of determined parents were on their own to find help for their children.

A language loophole in an old state code signed in the 1980s granted anyone in Georgia a small window of time to try cannabis oil with a THC level between 5.1 percent and 14.9 percent.

Jackson said obtaining medicinal marijuana is not hard. But finding access to lab-tested, safe and consistent concentrates of the right strains of cannabis oils is nearly impossible.

“ … There are great options for those with seizure disorders. While those help a few autistic children, they do not contain the ideal level of cannabinoids (THC) that my son and other autistic children need,” he explained. “They needed a higher level of THC for the cannabis oil to be effective.”

Jackson said he and the other families decided it was time to step up their game — they created their own cannabis oil for autistic children called “Colin’s Voice.”

“We traveled out west to meet with scientists, growers and processors to find a process and develop oils for autistic children,” explained Jackson. “We have three oils we are in the process of developing. The first one is ‘Colin’s Voice,’ which is high in CBD (cannabinoids), which help with cognitive development of the brain, but not self-harm capabilities.”

Jackson did not disclose the exact percentage of THC in “Colin’s Voice,” but said it met the HB1 guidelines, which is no more than 5 percent.

He said his son could begin using the final product by the end of the week.

“We have been working on a series of trial and error, and fine tuning Colin’s Voice for the past three months,” Jackson said Tuesday. “We were waiting on getting the final labs back before beginning the treatment. But he could start as early as today or tomorrow.”

The doting dad insisted he and the other families did not create these cannabis oils just for their children. The “life changing” treatments will be available for all parents who need them in Georgia.

“We have done the legwork in developing the science behind it and developing the product,” Jackson said. “Now our job is to put those families in contact with those people that create it … later, when we can prove the effectiveness of our strains, we hope to help other children around the country.”

When the Daily News asked Jackson if he and other parents were concerned about breaking state and federal laws by bringing the cannabis oils across state lines, he spoke very frankly.

“Do I worry about that? Absolutely. I weigh those odds every day between provoking law enforcement and helping a family,” he stated firmly. “But it’s not my fault that they — law enforcement officials and the governor — chose to lobby against the laws that we were trying to pass to get cultivation labs in the state so it would be legal.

“Now what you have is families buying stuff off the street and processing it in their kitchen,” he continued. “Which won’t hurt their children but won’t help them either. … The way we, myself and the other families look at it is we would rather take the risk legally, and do it right the first time, then to have all of Georgia figure it out later where to get and how to access cannabis oil legally. … So the fear of them focusing on going after parents purchasing cannabis oil … I can’t let that stop me.”

Colin has used cannabis oil since March. Jackson said while he still cannot speak, the family has seen great improvements in the 8 year old’s focus and understanding of the world around him.

“We can tell him, ‘Colin, it’s time to eat, go get in your chair,’ and he does. That’s communication,” said Jackson. “Or when he is watching a movie and I say, ‘Colin, it is time to go to bed,’ and he goes upstairs and gets in bed. That’s incredible. That’s something he couldn’t do four months ago.

“I know without a shadow of a doubt cannabis oil works,” Jackson added. “We now have a system set in place that ensures the families in Georgia who need the oil will have access to it.”

Though he cannot say it himself, Jackson said it is “Colin’s voice” that will soon be making a difference across the state — and one day across the country.