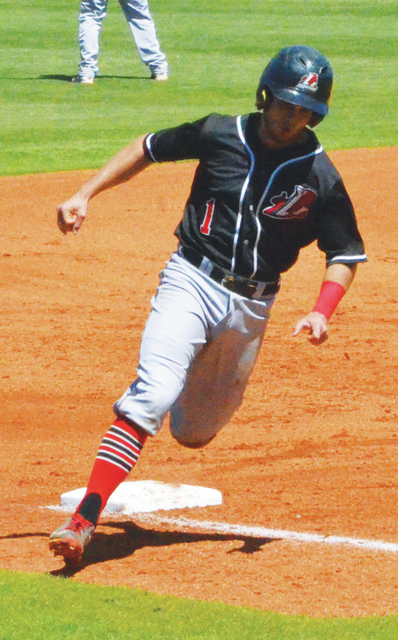 LaGrange College head coach David Kelton talks to his players during a game this season. The Panthers had an exceptional season, but they didn’t get an invitation to the NCAA Division III tournament. Kevin Eckleberry | Daily News

http://lagrangenews.com/wp-content/uploads/sites/37/2016/05/web1_LC2.jpgLaGrange College head coach David Kelton talks to his players during a game this season. The Panthers had an exceptional season, but they didn’t get an invitation to the NCAA Division III tournament. Kevin Eckleberry | Daily News

Junior Casey Bell had a big season for the LaGrange College Panthers with a .321 batting average and 18 RBIs. Kevin Eckleberry | Daily News

http://lagrangenews.com/wp-content/uploads/sites/37/2016/05/web1_LC-bell.jpgJunior Casey Bell had a big season for the LaGrange College Panthers with a .321 batting average and 18 RBIs. Kevin Eckleberry | Daily News

LAGRANGE – It was a sensational spring for the LaGrange College Panthers, who had one of the best seasons in the storied history of the school’s baseball program.

Despite their 30-13 record, though, the Panthers won’t be going to the NCAA Division III national tournament.

The Panthers fell in the semifinals of the USA South tournament, but they were hopeful of earning an at-large NCAA bid after all they’d achieved during the season.

But when the field was announced, the only USA South team that had its name called was Huntingdon, which won the tournament title to secure the automatic bid.

Huntingdon will participate in the six-team South Regional at Berry College, and it will play Birmingham-Southern on Wednesday.

It was, despite Monday’s disappointment, a breakthrough season for the Panthers.

After going five consecutive seasons without a winning record, the Panthers exploded for 30 victories this year, making them just the fifth team in school history to reach that mark.

Before this season, the last time the Panthers reached 30 wins was in 2005 when they went 31-13 and won the Great South Athletic Conference regular-season title.

In 2010, the Panthers won the GSAC regular-season and tournament titles, and like this season, they had to sweat it out and see if they’d get an at-large invitation since the conference didn’t have an automatic bid.

The Panthers earned a tournament bid that year, and they went 1-2 in the South Regional in North Carolina.

It call came together this season in head coach David Kelton’s third year at the helm.

The Panthers were scuffling a bit in the early going, and they fell to 2-4 in the USA South with a home loss to Piedmont on March 7.

Beginning with a three-game road sweep of Huntingdon, though, LaGrange College was off and running.

The Panthers won 17 of 18 games at one point, and they had their 14-game winning streak snapped with a loss to Maryville in the regular-season finale.

Kelton brought in a handful of transfer players who ended up in starting roles, and one of the team’s veterans said it just took everyone awhile to get in sync.

“We just had to get used to each other, and everything’s just falling into place,” Casey Bell said during the midst of the winning streak. “Everybody knows their role and is not trying to do too much. Early in the year, we were all trying to figure out our roles. Now we all know our roles. Everybody does their job. It makes it go smooth.”

The Panthers headed into the conference tournament riding high, but it was the Huntingdon Hawks who ended up capturing the title.

LaGrange College beat Covenant, Averett and North Carolina-Wesleyan in the tournament, but it dropped both of its games against Huntingdon.

In the semifinals on April 16, LaGrange College was eliminated with a 6-2 loss to Huntingdon, and that ended up being the final game of the season.

Not surprisingly, the Panthers were well-represented on the all-conference team.

Junior Blake Butcher, one of the transfer players that Kelton brought in, had a monster season and was named the USA South player of the year.

Tavin Thompson, the former Callaway Cavalier who transferred from Darton College, also had a huge season.

Thompson, the Panthers’ leadoff hitter, led the team with 49 runs scored and 18 stolen bases, and he had 20 RBIs.

Bell was second on the team with 38 RBIs, Sauls hit four home runs and drove in 32 runs, and Pigg also knocked in 32 runs.

The pitching staff wasn’t too shabby, either.

The Panthers should be poised to do some big things against next season with most of the key players returning.

The only senior among the position players was Sims, and Kelton will have to find a replacement for Morell in the rotation.