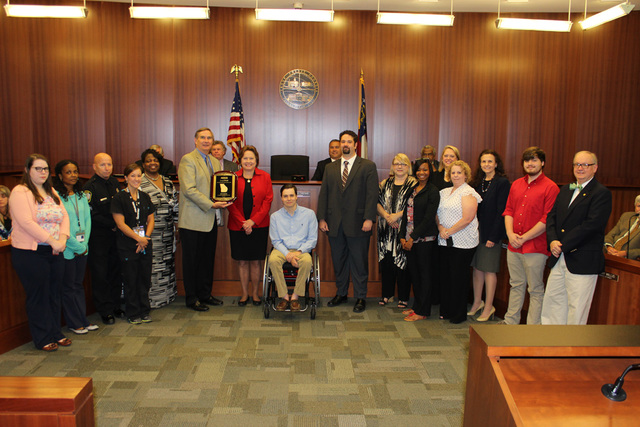 http://lagrangenews.com/wp-content/uploads/sites/37/2016/05/web1_Commission001WEB.jpgThe staffs of the Troup County accountability courts pose for a photo after being recognized for winning an excellence award Tuesday at the Troup County Government Center.

LaGRANGE — The staffs of Troup County accountability courts are celebrating more than their clients’ recoveries from addiction this week.

The Association of County Commissioners of Georgia recently gave the courts the County Excellence Award for their partnership with a local nonprofit to provide transportation for participants of the county’s DUI/Drug, Felony Drug and Mental Health courts.

“One example of innovation that was in our application for this award was our partnership with the (LaGrange) Housing Authority’s (nonprofit) West Georgia Star,” explained Scott Smith, DUI/Drug Court coordinator. “We’ve partnered with them to provide transportation to participants in the accountability courts who have no other way of getting to treatment.”

Smith said the court received a grant to provide transportation, and initially eyed the idea of using vouchers for taxi cab companies, but then a unique partnership opportunity arrived.

“There was actually an article (on the program) and Zsa Zsa Heard at the housing authority saw it, and called us up and said ‘hey, we have a 28-passenger bus and an 18-passenger van, and we’d be glad to partner with you guys and provide transportation,’” Smith said.

The partnership provides transportation for 20 participants in the accountability courts, and helps provide people who’ve lost their driver’s license because of a DUI conviction to make it to treatment and court hearings, he said.

Commission Chairman Patrick Crews said the award is an honor for the county, and highlights an unusual way the county can save money in one of it’s most expensive areas.

“Its a great honor for the court to be recognized,” Crews said. “When we were in Savannah at the ACCG (Association of County Commissioners of Georgia) meeting, there were about five counties recognized for innovative programs in the state of Georgia, and we were one of them. Judicial and public safety is a huge portion of our budget, so anything we can do to serve our citizens and reduce the budget is a great service.”

Markette Baker, the county’s solicitor-general who helps prosecute DUI and drug cases, said the partnership with the housing authority and the grant funding has helped participants be successful in the program.

“When (participants) are in a situation where they don’t have transportation, either because of the suspension, or because of lack of transportation, it’s hard for them to complete the requirements (of the program),” she said. “This funding means folks can get to where they need to go on a reliable and a consistent basis.

“Consistency of treatment is so important in this,” she added. “When they can get there, it means their likelihood of success is much greater.”

“We’ve got a great group of people working together in Troup County, and it’s enabled us to do a whole lot of great things,” she said. “We’ve tried to reach out to the people who need help and get them back on a path to being good citizens themselves.”

The programs are at least one year long and involve three phases: intervention, relapse prevention and continued counseling. Participants typically generally choose the program to receive the minimum jail sentence and fines so that they can begin their road to recovery as soon as possible, according to literature from the accountability courts.

Participants receive drug and alcohol counseling, and attend treatment twice a week. They are also subject to random drug screening and during the first 90 days of the program, participants are required to wear an ankle monitor that measures for alcohol use.

As of fall 2015, 248 participants had graduated from the county’s DUI and Drug courts, according to Georgia Trends magazine.