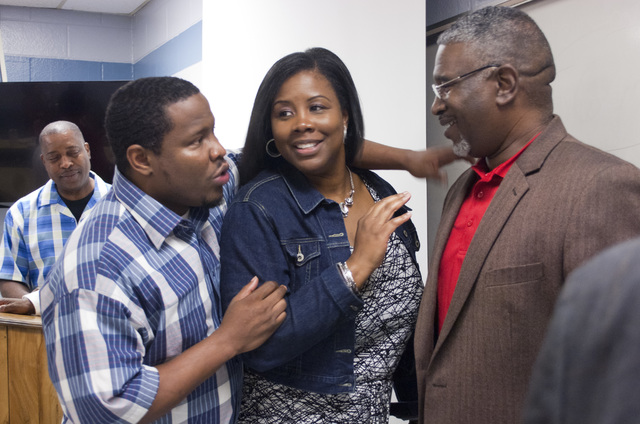 Byrd, who started working at the LaGrange Police Department in 1994, celebrated his retirement with his colleagues and well-wishers Thursday at the department’s headquarters on Haralson Street, but he’s not quite done working yet. He’s accepted a position with the LaGrange Housing Authority to serve as the director of protective services at the authority’s two complexes, Ben Hill and Lucy Morgan homes.

“He’s going great, awesome,” Heard said. “We’ve been talking about this for a while — to get our own officer. He’s getting involved, and we’re having meetings to introduce him to the residents, and we’ve had positive feedback. He’s already put on some gun safety classes.”

During his tenure at LPD, Byrd held a variety of positions, including internal affairs, special investigations and most recently community outreach officer.

He was responsible for partnering with neighborhood watch programs and improving the communication between communities and the police department, said Lou Dekmar, the city’s public safety chief.

“We came up with this notion to have a community outreach unit about six months before Ferguson,” Dekmar said, referring to protests that turned violent in Ferguson, Missouri, after a white police officer shot and killed an unarmed black teen. “Community outreach creates an opportunity for communication. Ferguson happened because of a lack of communication.”

Notably, Byrd worked with the residents of the Calumet neighborhood to revitalize it after a violent shooting happened at a public park in 2013.

Police Capt. Mike Pheil spoke at Byrd’s retirement and noted his self-starting attitude and positive relationships with residents of LaGrange.

“He took it upon himself to put a positive face on the department, and to reach out to the community,” Pheil said.