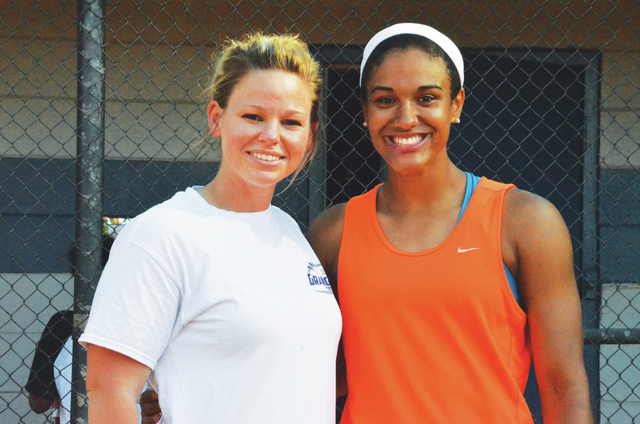 Gabby Heath and Marina Wilkerson, who were teammates for one year at LaGrange Academy, will be coaching the LaGrange High softball team next season. Kevin Eckleberry | Daily News

http://lagrangenews.com/wp-content/uploads/sites/37/2016/05/web1_softball2.jpgGabby Heath and Marina Wilkerson, who were teammates for one year at LaGrange Academy, will be coaching the LaGrange High softball team next season. Kevin Eckleberry | Daily News

For one successful season at LaGrange Academy, Gabby Heath and Marina Wilkerson were teammates on the softball team.

Now, eight years later, the two are on the same team again, but their roles have changed.

With their playing days behind them, Heath and Wilkerson have turned to coaching, and they’ll be in the dugout this fall to lead the LaGrange High softball team.

Heath has been on the staff for the past few years, and with the departure of previous head coach Dewey Lee, she will be taking over the top job.

Wilkerson, whose collegiate playing career ended in the spring of 2015, has been brought aboard to be one of the team’s two assistant coaches along with Jeff Skinner, who was previously on the staff.

Heath, who was a part of a pair of state-championship teams at LaGrange Academy, enjoyed four outstanding years playing at Georgia Southwestern before returning to LaGrange upon graduation.

Heath was first an assistant coach under Jan Fendley at LaGrange, and a year ago she worked with Lee.

Heath felt it was a valuable experience to learn the ins and outs of coaching from two veterans.

“It was good for me to see somebody who has a lot of experience in the game, and learn from them, and learn they how they deal with certain situations,” Heath said.

Wilkerson, who like Heath won a state championship at LaGrange Academy, split her time in college between Chattanooga State and the University of Tennessee-Chattanooga.

She wasn’t sure where the road would lead after college graduation, and she’s happy with where she’s landed.

“I’m very excited about it,” she said. “It wasn’t really in the plan to move back here. But I knew that I wanted to coach. And then to have the opportunity to come back to where I started, and to be able to work with Gabby, I just immediately took it. There’s no better way to start than at home.”

Wilkerson will try to help her new team enjoy the same sort of success she had as a college player.

Right out of the gate as a freshman, she was a part of a Chattanooga State team that won a junior-college national championship, and she banged out 14 home runs that season and hit .358

Wilkerson then went across town to UTC, and she helped the team win the Southern Conference tournament championship two consecutive years to advance to the NCAA tournament.

She said her college career “was exactly what I hoped for.”

“That’s another reason I wanted to coach, too, was so I could help these girls experience what I was able to experience,” she added.

With her college playing days at an end, Wilkerson wasn’t ready to say goodbye to the sport that had meant so much to her.

“First of all I love the sport,” she said. “I always said I wanted to stay around it as long as possible. It’s a job, but when you wake up doing what you love to do, that’s not a job.”

Heath is thrilled to have Wilkerson on her staff.

“She brings so much experience from the junior-college level, and the Division I level,” Heath said. “She has a lot of strength and conditioning background, too, so she’ll bring that to our program.”

Wilkerson said she and Heath are committed to helping put a winning team on the field.

“Between Gabby and I, we have the same expectations,” Wilkerson said. “We’re setting the bar pretty high. But, between the two of us, I don’t see any reason why we can’t meet those expectations.”