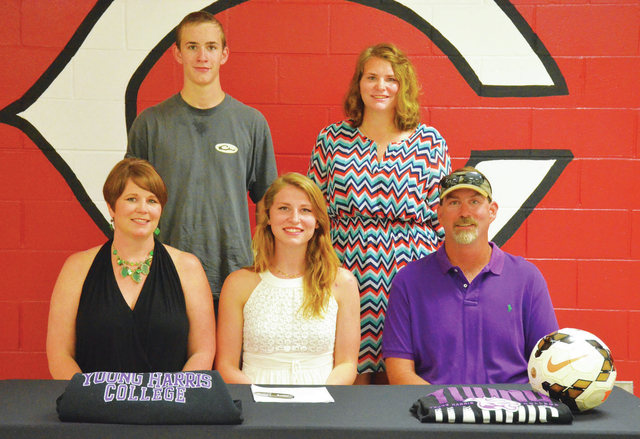 HOGANSVILLE – There’s nowhere else she’d rather be on a soccer field.

The pressure of being a goal keeper can be intense, but Callaway High’s Sara Sims embraces that.

“The adrenaline, being the last one on the line, it’s all up to you,” she said. “It’s a lot of pressure, but I like it.”

She’s also really good at being a goal keeper, which is why she will be playing college soccer next fall.

Sims has signed a letter of intent to join the Young Harris College soccer team, and she made it official during a signing ceremony on Wednesday morning at Callaway.

Those who are closest to Sims were there to enjoy the moment with her, including her friends and family, as well as some of her former teammates on the Callaway soccer team.

“I’m so excited,” she said. “I’ll be at Young Harris for two years and transfer somewhere else, try to go Division I.”

Sims played soccer at Callaway through her junior season and excelled as a goal keeper, but she wasn’t on the team for her senior season.

Sims continued to play club soccer for the Concorde Fire, and she was with that team when she participated in an event at Young Harris.

“I’ve been trying forever to find a school to go to,” she said. “And my club team went to a showcase and they were there. And they told me to come to our camp, and after that I didn’t hear anything from them. I went to the camp, and they didn’t even know I was coming. And they were like, cool.”

Sims made quite an impression at the showcase, and she ended up getting a scholarship offer.

“They said, you’re the one. We want you to come here,” Sims said.

She did some research, and talked to others who have gone to Young Harris, and she heard nothing but positive things about the school.

“I talked to people, and they said Young Harris was the best thing ever,” Sims said.

So Sims made her decision, and she’s now on the verge of being a college soccer player.

“All the people that told me I couldn’t make it, and now here I am,” Sims said.

Young Harris isn’t just getting a high-quality soccer player, it’s getting an exceptional student as well.

She scored a 30 on the ACT, which puts her in the top five percent nationally of students who take that test, and she also had a near perfect grade-point average.

“Congratulations to you, and the choice you’ve made to go on and play ball at the next level,” Callaway athletic director Pete Wiggins said while introducing Sims. “Obviously that’s a great honor.”

OF NOTE: For more photos from Wednesday’s signing ceremony, check out facebook.com/LDNsports