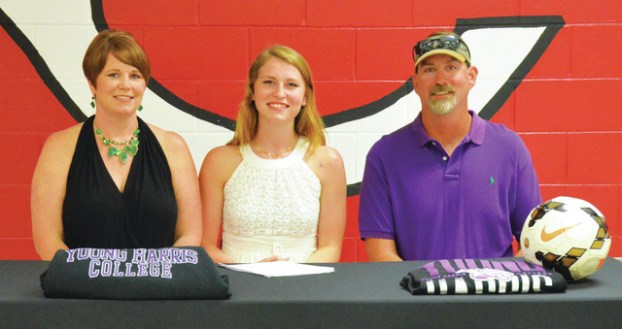 It’s been a special year for Cougar standout

Lafayette Christian School’s Clay Kelly was joined by his teammates on the soccer team during a signing ceremony on Wednesday at the school. Kelly has signed a letter of intent to play soccer at Truett-McConnell. Kelly helped Lafayette Christian win a state championship this season. Kevin Eckleberry | Daily News

http://lagrangenews.com/wp-content/uploads/sites/37/2016/05/web1_Kelly5.jpgLafayette Christian School’s Clay Kelly was joined by his teammates on the soccer team during a signing ceremony on Wednesday at the school. Kelly has signed a letter of intent to play soccer at Truett-McConnell. Kelly helped Lafayette Christian win a state championship this season. Kevin Eckleberry | Daily News

When his family moved from North Carolina to LaGrange in 2015, Clay Kelly ended up attending Lafayette Christian School for his senior year.

Kelly played three sports at Lafayette Christian, and he won state championships in all of them.

It began in the fall when Kelly was a member of the football team that won the Georgia Independent Christian Athletic Association state title, and he was a reserve player on the basketball team that went unbeaten and won it all in the winter.

Soccer is Kelly’s primary sport, and he was one of the team’s top players this spring, and the Cougars ended their season with a dramatic victory in the state-championship game.

“It felt different every time,” Kelly said. “It was special being a part of those teams. It was just great.”

The good times continued on Wednesday for Kelly, who signed a letter of intent to play soccer at Truett-McConnell College.

Kelly made it official during a signing party in the Lafayette Christian cafeteria, and there was a big turnout.

Kelly’s family members, friends and coaches were there to celebrate the moment with him, as were his teammates on the soccer team.

That level of support meant a great deal to Kelly, who said everyone embraced him in his one and only year at Lafayette Christian School.

“Coming here, everybody is so supportive,” he said. “I feel like this is my family.”

Kelly joined a soccer team that had championship aspirations.

The Cougars reached the title game in 2015 before falling short, and nearly every player from that team returned this season.

Having a player of Kelly’s ability helped the Cougars take the next step and win the title, and he appreciated the way the other players embraced him.

“It made it a lot easier,” he said. “They knew what I could do. They trusted me.”

Lafayette Christian soccer coach Shannon Powell said Kelly’s dedication to the game is part of what makes him so special.

“His love for the game just oozes out of him. That’s what it takes to move on to the next level,” Powell said. “The next level requires so much more commitment, and the speed of play, the physicality of the game is unbelievably different from the high-school level. I have full confidence that Clay is going to be able to do that.”

Kelly considered going to LaGrange College and joining the soccer team there, but after a visit to Truett-McConnell, he believed that’s where he belongs.

“I went to try out at Truett, and they showed us around the school, and it just felt like where I needed to be,” Kelly said.

The feeling was reciprocal.

Kelly shined at the tryout and was offered a scholarship by Truett-McConnell head coach Rob Miller.

“He’s shown everyone on the field that he has what it takes to play at the next level,” Powell said. “And obviously Truett-McConnell saw that as well. He went up there, they had a tryout day with probably 10, 15 and 20 guys there. Clay stood out to them. They offered him a scholarship there to play.”

Kelly is the second Lafayette Christian soccer player to sign with Truett-McConnell.

A year ago, Powell’s daughter Miranda Powell signed with Truett-McConnell, and she completed her freshman season in November.

OF NOTE: For more photos from Wednesday’s signing ceremony, check out facebook.com/LDNsports