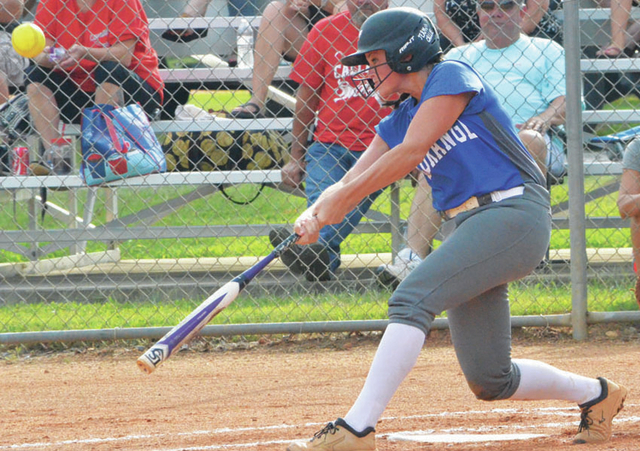 LaGrange’s McLain Skinner pitches during a game last season. Skinner is one of the returning players for the Lady Grangers, who went through spring workouts this week. Kevin Eckleberry | Daily News

http://lagrangenews.com/wp-content/uploads/sites/37/2016/05/web1_skinner.jpgLaGrange’s McLain Skinner pitches during a game last season. Skinner is one of the returning players for the Lady Grangers, who went through spring workouts this week. Kevin Eckleberry | Daily News

LaGrange’s Lauren Kuerzi takes a swing during a game last season. Kuerzi will be one of the team’s top returning players next season. Kevin Eckleberry | Daily News

http://lagrangenews.com/wp-content/uploads/sites/37/2016/05/web1_kuerzi.jpgLaGrange’s Lauren Kuerzi takes a swing during a game last season. Kuerzi will be one of the team’s top returning players next season. Kevin Eckleberry | Daily News

LAGRANGE – With a new softball season less than three months away, the LaGrange Lady Grangers have been hard at work.

The players have been participating in an offseason workout program for the past few months, and new head coach Gabby Heath said it has been going well.

“We’ve been doing offseason strength and conditioning since March,” Heath said. “So, we’ve had them for a while, working, and we have a really good group of girls, who want to work hard and love it. They have a lot of passion, too. It makes it easy for us in terms of getting them to want to do things.”

This week, Heath has been able to get all of her players out on the field for the first time.

For the second straight year, the Georgia High School Association has permitted softball teams in the state to hold spring tryouts, and LaGrange has taken advantage of that.

On Wednesday and Thursday, nearly 30 players were out on the field working out under the watchful eyes of Heath, as well as her two assistants, Marina Wilkerson and Jeff Skinner.

The majority of the players who took part in the tryouts are newcomers to the program.

“We have eight of our core coming back,” Heath said. “And we had 28 out here yesterday, so that’s 20 new ones. And that’s just for rising ninth-graders and up. So our rising eighth-graders aren’t out here.”

The 2015 team that reached the state playoffs had four seniors, so those players will need to be replaced, but there are plenty of talented players returning, including pitcher McLain Skinner, as well as slugger Lauren Kuerzi.

Heath said she’s been impressed by the progress made by some of the returning players.

“Some of our returners, they were good last year, but they’ve come back even better, which is exciting,” Heath said.

Before teams were permitted to hold spring workouts by the GHSA, tryouts were usually held at the start of preseason practice in August.

That was challenging since teams generally have about one week of practice before the season gets under way.

Now, coaches are able to get the players out on the field in the spring, and they head into the summer knowing what their team looks like.

“I think it’s great going into the summer, having a plan and knowing who’s going to be on the team,” Heath said. “We can really focus on a particular instruction for the girls. We know who will be a part of our program.”

Throughout the summer, LaGrange’s players will continue with the offseason conditioning program, which Heath believes helps build team unity.

“That’s why we wanted to do the strength and conditioning in the spring, to give them that relationship, and that bond, before they even got out there, so that they’re supportive of each other, and they build that team chemistry,” Heath said.