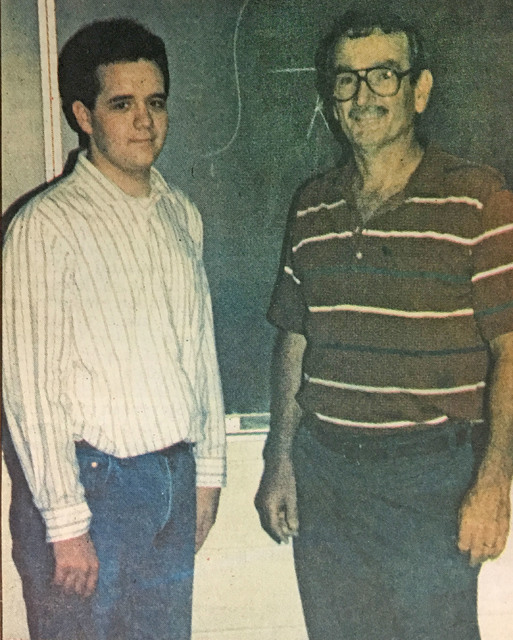 1991 LaGrange High School senior, Jim Thornton — now mayor of LaGrange — and his math teacher, Gene Hayes, made the news in a May issue of LaGrange Daily News when Thornton made a perfect math score on the SAT.

http://lagrangenews.com/wp-content/uploads/sites/37/2016/05/web1_web0522DyarCOL.jpg1991 LaGrange High School senior, Jim Thornton — now mayor of LaGrange — and his math teacher, Gene Hayes, made the news in a May issue of LaGrange Daily News when Thornton made a perfect math score on the SAT.

The $400,000 facility was constructed on 2,000 acres bequeathed to Georgia Sheriffs Youth Homes by the late Joe Young of LaGrange. The emergency care cottage was built with the help of a major gift from Callaway Foundation Inc.

It is named the Bailey Cottage in memory of the late Sheriff Lemuel W. Bailey of Troup County, a long supporter of youth homes programs.

The Troup County Chamber of Commerce will have a Travel Booth “staffed” by the Marquis de Lafayette — portrayed by Jack Morman — and Mrs. Nancy Morgan Brown, founder of the Nancy Harts — portrayed by Carol Cain. The historical figures will be joined by Miss Troup County, Julie Gilmer, who will distribute information on things to see and do in Troup County.

H.D. Woodward is chairman of the tourism committee and Gail Hunnicutt is in charge of the Whistle Stop Booth.

Carol Cain will tell how Nancy Brown led a group of women in defense of LaGrange at the end of the Civil War.

Jobless Rates Decline Here — LaGrange’s unemployment rate dropped from a revised 10.5 percent in February to a preliminary 9.1 percent in March, according to the Georgia Department of Labor.

Honoring Harris — George Harris retired this week and was honored at a reception on Friday for his 46 years in the recreation profession, including 21 years as Troup County’s first and only recreation director.

Larry Hanson, president of the Georgia Recreation and Parks Association, announced that Harris has been named president emeritus of GRPA.

Number Perfect — Veteran LaGrange High School math teacher Gene Hayes, who is retiring after more than 30 years in the classroom, can accurately say that one of his last pupils is also one of his best.

Jim Thornton, a National Merit Scholar who will attend Georgia Tech, scored a perfect 800 on the math section of the Scholastic Aptitude Test during his junior year at LHS. The first student from LHS to make a perfect score as an underclassman, Thornton has continued to pile up math honors as a senior, scoring a perfect score on the West Georgia RESA math test and an outstanding score on the American High School mathematics exams.

He is the first LaGrange High student to be invited to the American Invitational Math tournament. In addition to his National Merit award, he received a Georgia Tech academic scholarship, Wal-Mart scholarship and Hatton Lovejoy Scholarship and had grant offers from Erskine, the University of Alabama, Furman, Cornell and Swarthmore.

Price Receives State Honor — Sgt. Barbara Price, a 19-year veteran of the LaGrange Police Department, has been honored as first runner-up for Georgia’s Female Officer of the Year.

Price was one of seven female police officers honored for their achievements at the annual convention of Georgia Women in Law Enforcement held in Savannah.

“One of the fondest expressions around is that we can’t be the world’s policeman. But guess who gets called when suddenly someone needs a cop.”

Columnist: The miracle in the sun