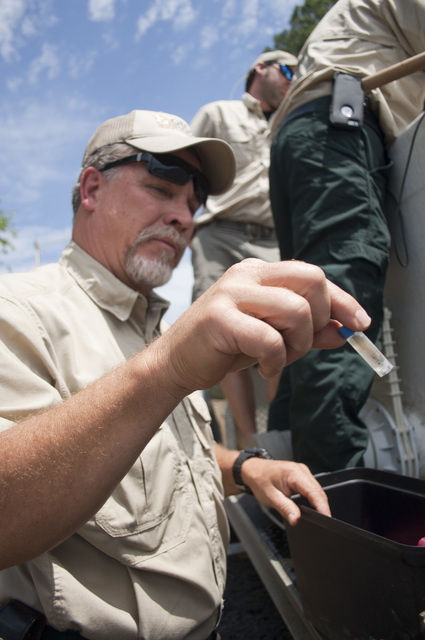 Vials filled with largemouth bass are preserved for later examination of their DNA.

http://lagrangenews.com/wp-content/uploads/sites/37/2016/05/web1_FishStock05WEB-3.jpgVials filled with largemouth bass are preserved for later examination of their DNA.

Paul Jones, a fishery technician with the Georgia Department of Natural Resources, holds a vial containing a largemouth bass specimen on May 12 at Yellow Jacket Creek access park on West Point Lake. The vials will be stored for later DNA comparison to determine how many of the 41,000 largemouth bass stocked in the lake survived.

http://lagrangenews.com/wp-content/uploads/sites/37/2016/05/web1_FishStock04WEB-3.jpgPaul Jones, a fishery technician with the Georgia Department of Natural Resources, holds a vial containing a largemouth bass specimen on May 12 at Yellow Jacket Creek access park on West Point Lake. The vials will be stored for later DNA comparison to determine how many of the 41,000 largemouth bass stocked in the lake survived.

LaGRANGE — After the Department of Natural Resources stocked more than 41,000 largemouth bass in West Point Lake last week, area residents had some questions and comments on social media.

The most common concern on the Daily News Facebook page was the size of the fish — averaging 2.14 inches — and that larger predators would gobble them up before they had the chance to reach maturity, which will take two to three years to reach 14 inches.

“If there was some water in the bushes for them to hide in, it would actually work. Otherwise it’s striper food,” one commenter wrote, referring to striped bass fish.

To answer some of these questions, the Daily News followed up with Brent Hess, a fisheries biologist with the DNR who helped organize the stocking.

“There are many reasons not to stock bigger fish,” Hess said. “Stocking bigger fish also means stocking less in numbers. As an example, you can stock 100 bigger fish or 1,000 smaller ones. Stocking bigger fish doesn’t always necessarily equal more adult fish. Also, the larger a fish grows in a hatchery, the cost in raising them grows exponentially.”

As a practical matter, Hess said that larger fish are harder to ship. The ones stocked in West Point Lake last week were brought in from Richmond Hill, near Savannah, on a DNR tanker truck. He also said that the larger bass grow in a hatchery, the more common it is for them to begin eating each other.

There’s no denying that some of the tiny largemouth bass will be eaten by larger predators, Hess said. Still, the sheer volume of the largemouth stocked in the lake last week should compensate for the losses.

“Studies have shown very few largemouth bass are eaten by striped bass and hybrids. Currently, Georgia DNR stocks both striped bass and hybrids every year, and thousands of them grow to be available to anglers,” he said. “Also, one adult female largemouth bass can easily produce tens of thousands of eggs. Therefore, just a few fish can be beneficial.”

DNR also plans to keep an eye on the largemouth bass, and have a plan in place to measure the population in the future. The stocked fish were marked with a special dye that can be used to identify them from wild fish, Hess explained. There’s also some science involved.

“Also, we have the genetic markers to determine survival of the actual stocked fish, as well as their contribution to generations in the future,” Hess explained. “We sample the lake every year to assess the bass population, and to help determine any long-term trends.”

Hess said that if 25 percent of the fish survive, he would “consider that very good.”

There’s also the potential for future stockings. Hess said he hopes to stock additional largemouth bass later this year, and he’s requested that DNR stock the lake every year for the next five years, depending on availability.

Finally, some social media users questioned the location of the fish release, arguing that there wasn’t enough brush coverage to help the small fish hide from predators. Part of choosing Yellow Jacket Creek access park was logistical, Hess said, and another part was the features nearby.

“The Yellow Jacket access provides easy access to the lake for the stocking truck,” Hess said. “We need a location where the hauling truck can get to the water and provide a good release point. Also, Yellow Jacket has underwater cover close by the ramp as well as several hundred yards of riprap (shoreline rubble) along the bridge.”