Shelter soon to be homeless again 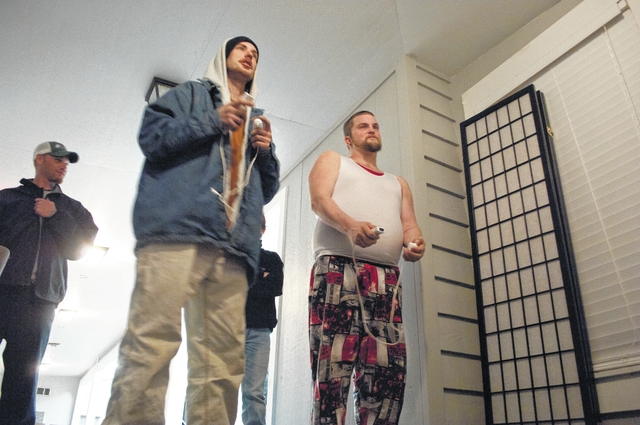 A temporary warming center is set up at ThreeLife Church on Hogansville Road on Feb. 9.

http://lagrangenews.com/wp-content/uploads/sites/37/2016/05/web1_3life-1.jpgA temporary warming center is set up at ThreeLife Church on Hogansville Road on Feb. 9.

Lucas Stepherson, 25, and Robert Darbonne, 23, play video games at a temporary warming center set up at ThreeLife Church on Hogansville Road on Feb. 9.

http://lagrangenews.com/wp-content/uploads/sites/37/2016/05/web1_3Life2-1.jpgLucas Stepherson, 25, and Robert Darbonne, 23, play video games at a temporary warming center set up at ThreeLife Church on Hogansville Road on Feb. 9.

LaGRANGE — It was a cold February night in Troup County when the warmhearted congregation of ThreeLife Church on Hogansville Road spontaneously opened their doors to six area homeless people following a contentious City Council meeting.

Council members denied a variance that effectively meant the town’s only homeless shelter, the Emmaus Center at 321 Greenville St., could no longer house people at night.

Without a second thought, ThreeLife pastor the Rev. Josh Rhye immediately offered them a new place to stay.

“We saw a need in our community and knew we could help. I didn’t want to be a part of the argument but could offer up at least a temporary solution,” explained Rhye. “It’s pretty simple really. If your community has a need and you can meet it, then that’s what we are called to do.”

“We would have been closed down a long time ago had they not opened their doors to us,” said Jessica David, executive director of the Emmaus Center.

The church made their new guests feel right at home — stacks of pepperoni pizza and baked goods lined folding tables while cots were covered in blankets and quilts.

Soon, a temporary, three-night shelter turned into three-month one.

“It allowed us to say yes to fathers and to expand our mission,” she explained. “If we have to streamline our mission to just women and children or to just families, then we will do that. But I have a 13-year-old son. The center used to not take in any boys over the age of 10 years old. So that means I would have to say no to myself.”

The center’s mission will be changing, especially when it comes to the folks still staying at ThreeLife.

The church will be closing the homeless shelter by the end of next week.

“We are in need of all the spaces for our kids ministry this summer,” Rhye said. “We have a kids event coming in June for kids in our church and the community … we will be using all the spaces each night.”

David understands the dilemma and said she is grateful for the support ThreeLife has shown the Emmaus Center over the past three months.

“To use up every inch of your space day after day is such a sacrifice,” David stated. “The church had volunteers out there at 4 a.m. on weekends helping everyone get ready for service … cooking meals for our folks and just loving on them.”

Rhye said congregation members grew close with their new guests and invited them to church and other gatherings.

“We have a team of people that are now called ‘friends,’ food and a place to call home for the time being. Many were saved and baptized and now serve in the ministry with us,” he explained.

It has been a tough battle recently for David and the Emmaus Center.

The city rescinded its offer for the center to use the old Dawson Street Elementary School as a temporary warming center for the homeless on Feb. 5.

The nonprofit group went before the City Council on Feb. 9 in hopes of having the permit changed on their day center to allow them to operate as a night shelter. It was denied.

The Matthews building located on Hill Street was used as the night center for men. The city has temporarily closed that facility down as well until it is brought up to code, David said.

David said if no one else steps up to help out, by the end of May there will be no night center for homeless people in LaGrange.

In fact, there will be no homeless shelter for folks at night between Columbus and Atlanta.

“Until God shows us his plan,” she stated.

“We know he has a plan,” said Kirk Schmaus, Emmaus Center assistant director.

They said about 20 people are still using the ThreeLife facility. But they know of at least 30 more that need a temporary place to stay, David added.

Rhye said they hope to open a temporary homeless shelter again in the future. Friday, May 27, will be the last night ThreeLife congregation members will host their new found friends at the church.

After that, once the sun goes down on Troup County, the homeless may be left to fend for themselves — however they can.