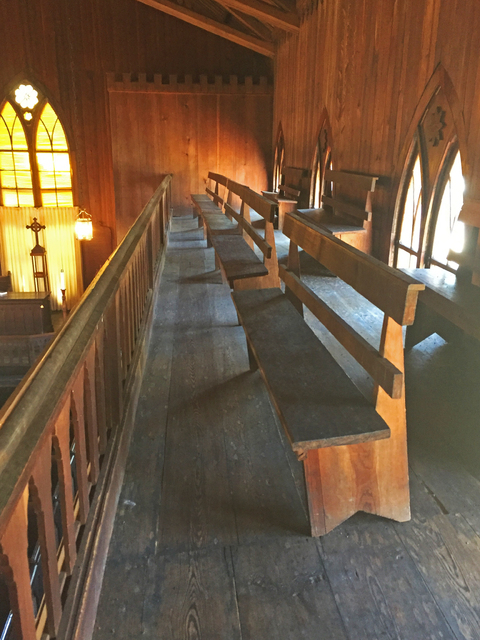 TALBOTTON — On historic Ga. Highway 41, south of Atlanta, is the small town of Talbotton, founded in 1828.

They all are proud of the Zion Episcopal Church, one of the oldest churches in Georgia still standing in its original form in its original location. The structure was placed on the list of National Register of Historic Places in 1955.

Built in 1848, the Tudor-Gothic Revival style is typical of an English rural parish church. Much of its interior was made from local walnut, but the interior roof support beams are thought to be made of rare, white cedar, also from Talbot County forests.

The bell tower is supported by massive beams, all connected by wooden pegs and mortise and tenon joints, customary for buildings from that period. Some handmade nails were used, supplied by a local blacksmith’s shop. Candle sconces were originally attached to each balcony support beam and the outline of those sconces can still be seen today.

A single oil lamp was lowered and raised in the center of the sanctuary that was attached to one of the roof’s support beams.

The key to the massive front doors date to 1848 and is 6 inches long, looking more like a dungeon key from a castle. The original 1848 lock still works.

When you enter the church, you are swept back in time before the Civil War. Slaves attended the same church as their owners, but the slaves sat in the balcony, their white owners sat on the main floor sanctuary. The organ is in the balcony and is the oldest still operating, hand-pumped organ made by Pilcher in the United States. It was installed in 1850.

The young boys who pumped the organ had to watch a gauge to make sure the pressure was enough, but not too much, so the organ could operate properly. Family “box” pews of heart pine, as originally installed in 1848, have pew doors with wooden latches. The windows have glass panes with “waves,” indicating some of them are very old, evidenced by the crudeness of their manufacturing process.

The church has not had regular Sunday services in over 50 years, but still has quarterly services operated by the Episcopal Diocese. Occasionally, they hold weddings and have other functions.

Father Jeff Jackson, Rector of the Saint Nicholas Episcopal Church in nearby Hamilton, still cares for the pre-Civil War structure. Father Jackson knows everything about the church and walked me through the structure, explaining many of the facts mentioned in this article.

The interior of the church is in remarkably good condition, considering it is 168 years old. The exterior is in grave need of restoration, it was cited in 2011 as one of the “Ten Places in Peril” by the Georgia Trust for Historic Preservation.

Bids for the exterior restoration have been received and approximately $70,000 is needed to restore this historic building’s exterior to its original condition. A new roof was put on the church recently, but the balance of the exterior needs work or eventually, the interior will be affected.

Those willing to donate funds for the restoration of this historic building can contact Father Jeff Jackson at fatherjeff@stnicholashamilton.org or call him at 706-628-7272. Of course, all donations towards this restoration project will be tax deductible. The church is open by appointment only through Father Jeff Jackson.