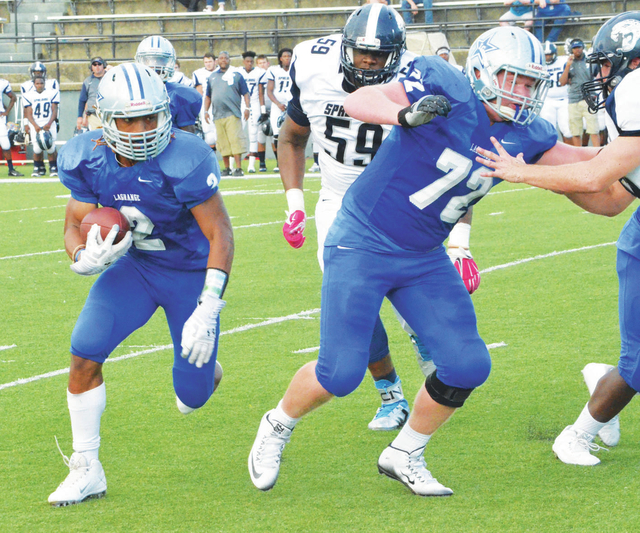 LAGRANGE – He figured he’d give it a shot.

It was getting to the late stages of the track and field season, and senior Jeremiah Wright decided to add another event, the triple jump, to his already busy schedule.

Turns out, that was a great decision for the team, and for Wright.

Wright excelled in the triple jump, and in his final high-school competition, the state finals in Jefferson, Wright finished sixth to earn a place on the awards podium where he received a medal.

Wright was also a long jumper and sprinter for the Grangers, and he even threw the shotput at the Region 1-AAAAA meet.

It was the triple jump where Wright truly excelled, though.

“It was my first year doing that event, and I started late,” Wright said. “I did about four track meets triple jumping. They thought, put me in the triple jump, and see what happens.”

While Wright was a late arrival to the triple jump, LaGrange’s Erica Emory focused soley on one event during her senior season.

Emory, who transferred to LaGrange from Heard County for her senior season, specialized in the high jump, and she excelled in that event.

Emory made it to Albany for the state finals, and she had a jump of 5-feet-2 inches, which gave her a fifth-place finish and a spot on the podium.

For Wright, the performance in Jefferson marked the culmination of a stellar athletic career at LaGrange.

Wright was a standout linebacker and running back for the football team, and he earned an athletic scholarship to Clark Atlanta University.

In track and field, Wright had a strong senior season, and his decision to give the triple jump a try obviously paid major dividends.

At the Carrollton Invitational, Wright and teammate Tobias Spence tied for second place with matching jumps of 43-3.

Then at the Region 1-AAAAA meet, Wright qualified for the state sectional by finishing second with a jump of 44-10.

Wright followed that up by jumping 45-2 at the state sectional, which was good enough for a third-place finish, and he was off to Jefferson.

On Wright’s first attempt in the state finals, he delivered what he felt was a solid jump, but it turns out it was the best jump of his life.

Wright jumped 46-0.5 feet, which was his personal best and a school record, and it was the jump that gave him the sixth-place finish.

Wright didn’t eclipse that on any of his ensuing jumps, but he’d done enough to be able to stand alongside the best triple jumpers in the state.

“It was pretty good to know you’re top eight in the state,” Wright said.

With graduation a week away, Wright turns his attention to college, but he said he’ll always be a Granger and he treasures the time he had at LaGrange High.

Emory only had one year at LaGrange, and she enjoyed it.

She was looking forward to joining a more established track program where she felt she’d be able to realize her potential.

“It was perfect here,” she said.

Emory’s goal heading into her senior season was to earn a spot on a college track team, and she said she’s close to making that a reality.

“My mom moved down so I could get a scholarship somewhere,” she said. “And it worked out. Kennesaw State is looking at me. All I have to do is wait for them to get my SAT score, and then they’re going to accept me.”

Emory finished second in the region meet with a jump of five-feet even, and then at the sectional competition, her jump of 5-2 was good enough for third place.

Emory had been to the state finals twice while at Heard County, and she didn’t medal either time.

One of her trips to Albany ended in painful fashion.

“One year, I rolled my ankle doing it, so that was really bad,” she said.

The third time was the charm for Emory, who secured a fifth-place finish.

Emory, who also played basketball at LaGrange, set the school record in the high jump with a jump of 5-4 at the Granger Invitational.