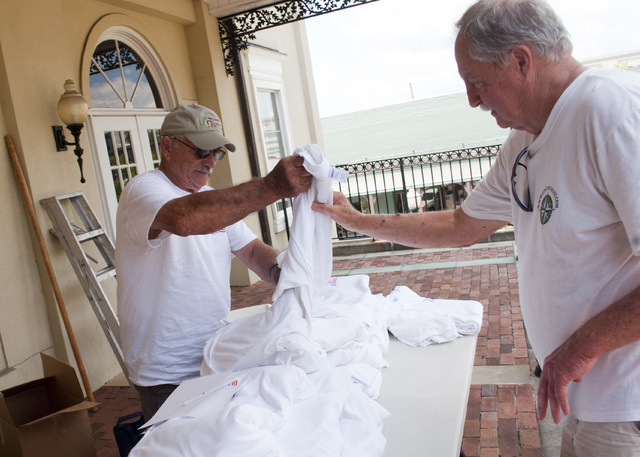 LaGRANGE — A local nonprofit is declaring a “war on litter” and aims to enlist new soldiers.

Keep Troup Beautiful, an affiliate of a national program targeting waste prevention, held its annual Great American Cleanup on Saturday at locations across the county, according to Scott Landa, the group’s executive director.

“We had a group in West Point that focused on the streets around their church,” Landa said. “Interface, which was the largest group, worked around the Ray C. Anderson plant in West Point, and around the industrial park here in LaGrange.”

Landa added that the local chapter of the Sierra Club, an environmental group, tackled “one of the worst litter areas in the county,” north of town where Mooty Bridge and Wares Cross roads meet.

About half a dozen groups participated in the cleanup day, and Mac McGowan, a long-time Keep Troup Beautiful volunteer, admits he wishes the turnout had been stronger.

“Frankly, we’ve had kind of a disappointing turn out this year,” he said Saturday on the Chamber of Commerce plaza on Lafayette Square as he passed out T-shirts to volunteers.

“Somehow, I guess budget woes and things have taken their toll on the interest level,” he said. “Still, the biggest problem we have in the county is still litter. Somehow, we’ve got to re-energize people to be concerned about litter. … We are fully behind trying to revitalize a war on litter.”

Landa, the group’s director since February, is optimistic.

“Overall, I think we’re in a mode of trying to revitalize the group,” he said. “We have a new, motivated board of directors, and that’s really positive to me. So much of it is about education and getting the word out about what we do, hoping to get people to take responsibility for litter, and for recycling.”

He said people don’t have to wait for the once-a-year Great American Cleanup event to start tidying up their communities.

“We do have different kinds of projects that go on,” Landa said. “What we’d like to see is somebody taking on an all-year project. Litter is there all the time, and we want people to be aware of that. Some of the neighborhoods are taking the lead on that.”

One Tank Wandering: Take a hike!