Campers get a look at hometown heroes 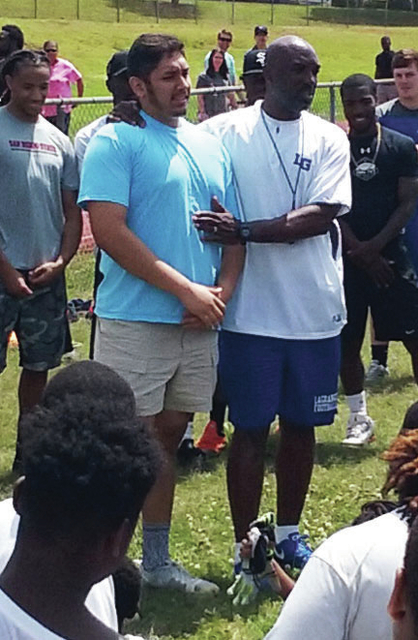 LAGRANGE – As the camp came to a close, after the more than 80 young football players had carried the ball for the final time on the grass at the Granger Park football field, LaGrange head coach Dialleo Burks brought them together.

He called the campers in, asked for their attention, and introduced a group of men to them.

The men in question were all former football standouts either for Callaway, Troup or LaGrange, and they’ve each gone on to succeed in college not just as players, but as citizens and students.

Burks wanted the young players to see what can happen if they work hard, and dedicate themselves to doing things the right way in all aspects of life, not just on a football field.

“That’s the whole idea,” Burks said. “These guys, Christian Cumberlander, Maurice Swain, Terry (Godwin), all these guys, they wanted to go the next level. I just want to promote that to our guys. Whatever it is, football, or business, set your sights on something higher.”

On hand for Saturday’s camps were some of the top players Troup County has produced in recent years, including Godwin, who is coming off a stellar freshman season at the University of Georgia.

Burks introduced all of the players to the campers, and a few of them took a few moments to share their thoughts.

Swain, a defensive lineman who played two years of junior-college football before transferring to Auburn for the 2015 season, told the campers “the biggest thing I can tell you is work hard and get your grades.”

“Grades are the biggest thing,” Swain added.” You don’t get the grades, nobody wants to talk to you. There’s nothing they can do with you. Make sure you do good in school. Don’t get in trouble. That ain’t what you want to do.”

Ramirez, who is heading into his second season at Shorter, said there are no shortcuts when it comes to achieving success.

“Just hit the books, and work hard,” Ramirez said. “Just do the right things and stay out of trouble.”

The message wasn’t just for the campers, either.

Burks had a number of his players helping out in the camp, and Burks felt it was important for them to see what’s possible, which is why he was glad to have a pair of former Grangers represented in Ramirez and Denson.

Whereas Ramirez is an offensive lineman who could be in line to start this season, Denson is entering his second season as a running back at South Carolina, and he is climbing the depth chart.

Burks bragged on Denson’s commitment not just to football, but to the class room.

“He made the Dean’s list for the whole year up at South Carolina,” Burks said.

That’s important, Burks said, because “at any moment, your football career can go out the window. You’ve got to have something to fall back on.”

All of the players took time to meet with the campers, and sign the T-shirts and jerseys that were handed out to the participants.

Naturally, one of the most popular players was Godwin, who patiently signed autographs for all of the young campers who were interested.

When Burks asked the congregrated campers if they knew who Godwin was, nearly all of them raised their hands, and one of them shouted out “Little T,” which is his nickname.

Godwin, an all-state player at Callaway, was one of Georgia’s top offensive players as a freshman, and he was the MVP of the TaxSlayer Bowl.

One of the other former Cavaliers on hand, Parks, has also enjoyed success on the collegiate level, although his 2015 season at Southern Miss was shortened because of an injury and he was red-shirted.

Parks, who was an effective running back as a freshman in 2014, should be a big part of the team’s plans next season.

Leverette was a part of Kennesaw State’s first-ever football team last fall, and he played in every game and was a key special-teams player.

As for the former Tigers on hand, Cumberlander is a senior wide receiver at San Diego State, and Bonner is coming off a strong freshman season at Savannah State that saw him become a starter at defensive back.