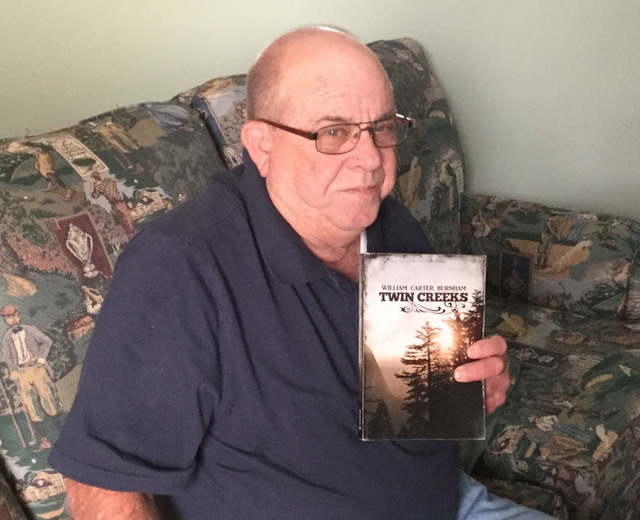 HOGANSVILLE — A local man with a lifelong love of Westerns has released his first book, which ties the old West to west Georgia.

William Carter “Randy” Burnham was born and raised in Hogansville and is a U.S. Navy veteran who served in Vietnam. He worked for 20 years as a construction inspector for Coweta County before retiring to fulfill his dream to write a Western novel.

“I’ve always loved reading Westerns, and I’ve had this book rattlin’ around in my head for five years,” said Burnham. “Once I started writing it down, I couldn’t write fast enough. My fingers couldn’t keep up with the story in my mind.”

Burnham’s novel, “Twin Creeks,” was published last year by RoseDog Books in Pittsburgh. Ruby, his wife of 41 years, helped with the research and his sister in Florida helped him edit the book.

“Twin Creeks” begins in west Georgia in 1847 as two brothers travel to Texas with their family mule, Bell, in search of a better future. The brothers have never been farther than 20 miles from the Georgia farm where they grew up, but become men when they reach Texas and join the Texas Rangers.

Burnham has enjoyed reading Western and history books for years. His ancestors include Native Americans of the Creek and Cherokee tribes, and his sympathy for the plight of Indians in the Old West is woven into his writing.

The novel is rich in dialogue and moves the story along quickly.

“Dialogue is easy writing for me,” Burnham said.

The process of publishing a book has been a learning experience for Burnham and his wife.

“We thought maybe we needed an agent,” he said. “But no one would even call us back.”

He eventually decided to self-publish the book, and said his publisher has been helpful.

His publisher advised him to cut it in half, and that was difficult for Burnham.

“I thought everything I cut out was good,” he said.

But he admits that the editing made the final version, at 310 pages, a better book. He may use some of the edited dialogue and situations in future books.

Burnham is currently at work on a sequel to “Twin Creeks.” His sister will again help edit the new novel, as she did with the first one.

Twin Creeks is a large-sized paperback with a cover photograph of a setting sun, pine trees and mountains. It is available for purchase online at Amazon.com as both paperback and e-book. Copies may also be purchased directly from the publisher, RoseDog Books, at 585 Alpha Drive, Pittsburgh, PA 15238.