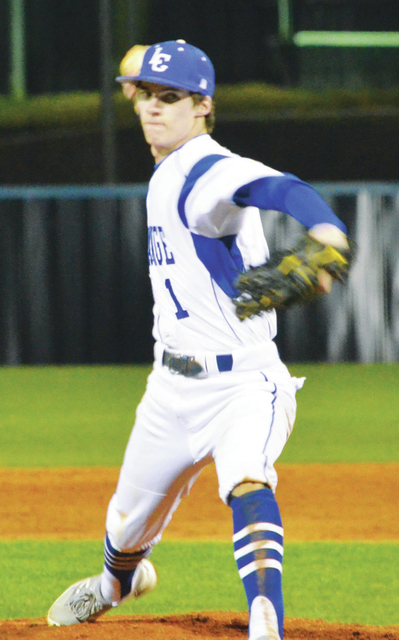 Jake Howard had a stellar all-around season for LaGrange, and he made the all-region team. Kevin Eckleberry | Daily News

http://lagrangenews.com/wp-content/uploads/sites/37/2016/05/web1_LHS-howard-1.jpgJake Howard had a stellar all-around season for LaGrange, and he made the all-region team. Kevin Eckleberry | Daily News

LAGRANGE – A trio of LaGrange High seniors, alone with a junior who’ll be an anchor on next year’s team, have been selected to the all-Region 1-AAAAA team.

Seniors Larkin Easterwood, Jake Farrar and Jake Howard, along with junior Ben Anderson, are part of the all-region team that includes players from each of the region’s seven teams.

Those four players helped LaGrange finish third in the region with an 11-7 record.

LaGrange then beat Union Grove in a thrilling series in the opening round of the Class AAAAA state playoffs before falling to Gainesville in the second round.

Easterwood, Farrar, Howard and Anderson had plenty to do with the Grangers’ success this season.

Easterwood, who was mostly a designated hitter this season but also got his share of playing time at catcher, was one of the team’s top hitters, and he’ll be heading to Central Alabama Community College to play baseball next spring.

Howard, Farrar and Anderson were all productive hitters in the lineup, and they also got it done on the pitcher’s mound.

In the final week of the regular season, those three men threw back-to-back-to-back shutouts as LaGrange clinched a playoff spot.

Farrar had a remarkable stretch late in the season when he threw consecutive shutouts and had 16 straight scoreless innings.

Farrar threw seven shutout innings in a 9-0 win over Shaw on April 7, and he tossed two scoreless innings against Northside on April 11.

Then in a game the Grangers probably needed to win to make it to the state playoffs, Farrar delivered a brilliant outing in a 1-0 victory over Hardaway to begin that week’s shutout streak.

At one point in that game, Hardaway had the bases loaded, but Farrar managed to work his way out of the jam.

“He was phenomenal,” LaGrange infielder Matthew Anderson said. “He put the team on his back, and he didn’t let anything get to him. He had the bases loaded, and he came back and threw strikes. He was great.”

Ben Anderson, who had the team’s top batting average, followed Farrar to the mound that week and worked seven shutout innings in a 4-0 win over Harris County.

One day after Ben Anderson threw a shutout, Howard followed suit and went the distance in a 2-0 win over Harris County.

That victory secured a state invitation for the Grangers, who began the week in fifth place and in danger of missing the playoffs.

For Howard and Easterwood, there is more baseball to be played.

Before the season, both men signed letters of intent to play college baseball.

During his time at LaGrange, he was a catcher, infielder and pitcher.

Easterwood gives Central Alabama a power-hitting catcher, although he served mostly in a designated hitter role this season.

Easterwood improved during each of his high-school seasons.