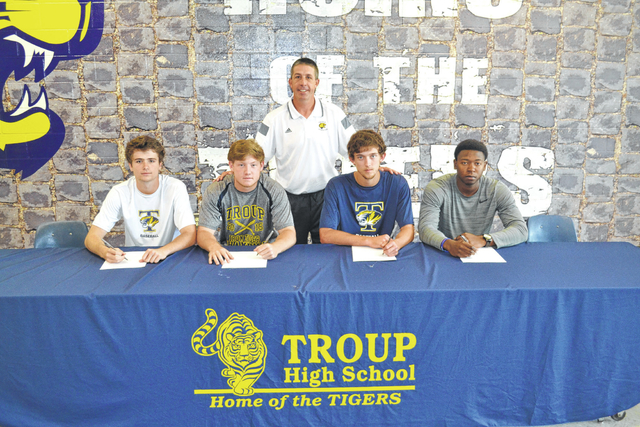 Troup’s Miles Cameron has signed a letter of intent to play baseball at Columbus State. Photo by Scott Sickler

http://lagrangenews.com/wp-content/uploads/sites/37/2016/05/web1_signing3-1.jpgTroup’s Miles Cameron has signed a letter of intent to play baseball at Columbus State. Photo by Scott Sickler

Troup’s Bo Halcomb has signed a letter of intent to play baseball at Marion Military Institute. Photo by Scott Sickler

http://lagrangenews.com/wp-content/uploads/sites/37/2016/05/web1_signing4-1.jpgTroup’s Bo Halcomb has signed a letter of intent to play baseball at Marion Military Institute. Photo by Scott Sickler

Troup’s Winston Turner has signed a letter of intent to play baseball at Marion Military Institute. Photo by Scott Sickler

http://lagrangenews.com/wp-content/uploads/sites/37/2016/05/web1_signing5.jpgTroup’s Winston Turner has signed a letter of intent to play baseball at Marion Military Institute. Photo by Scott Sickler

Troup’s Payton Upchurch has signed a letter of intent to play baseball at Marion Military Institute. Photo by Scott Sickler

http://lagrangenews.com/wp-content/uploads/sites/37/2016/05/web1_signing6.jpgTroup’s Payton Upchurch has signed a letter of intent to play baseball at Marion Military Institute. Photo by Scott Sickler

LAGRANGE – It was, for Troup baseball coach Craig Garner, a self-described “bittersweet” day.

Garner was thrilled to watch four of his players, men who have been such an instrumental part of the Troup baseball program, sign their letters of intent, meaning they’ll get the chance to play college baseball.

Garner also knows it means that his time with them is ending, and he’s sad to see them go.

On Wednesday morning, during a ceremony in the Troup High cafeteria, Bo Halcomb, Winston Turner and Payton Upchurch all signed with Marion Military Institute in Alabama, while Cameron signed with Columbus State.

“The simple fact is that these guys have been with us the last five years, been the best group of seniors I’ve ever coached,” Garner said. “I’m proud for them to see them take this next step in the process of life, but also sad to see them leave and not be part of the program anymore.”

All four players made a sizeable impact on the program.

Cameron, Halcomb and Turner were starters as freshman on a team that reached the final four, and they continued to thrive and succeed through their senior season when Troup won its first region championship since 1995.

“That’s one of the major highlights, just seeing these guys grow and progress, but also be good enough to help us at such a young age, and just to watch them grow over the years,” Garner said.

Upchurch began making a major contribution as a junior when he became a key member of the pitching staff, and he closed his high-school career with a sensational senior season.

“Payton Upchurch is the other one who has really grown and matured,” Garner said.

Garner added that Upchurch has made “significant progress” and he’s thrilled to “see him develop into the young man and pitcher he is today.”

Cameron will be joining a Columbus State program coming off a stellar season that included a conference championship and a spot in the NCAA Division II program.

It just so happens that Cameron is heading to Columbus State at a time when another former Troup Tiger, Jackson Oliver, is leaving.

Oliver was a four-year starter at Columbus State, and he had a stellar career that ended with him earning a spot on the all-conference team.

For Troup, Cameron will be a tough guy to replace.

He was an offensive threat, hitting .438 with six home runs and 32 RBIs, but he was also a phenomenal defensive outfielder who saved a ton of runs over the years.

“I enjoyed all the coaches and all the guys I’ve grown up with, playing together these four years,” Cameron said. “It’s been fun, all these memories we’ve had. I’ll be sure to take all of that to Columbus State.”

Turner and Halcomb were both superb all-around players, getting it done as hitters, pitchers, and in the field.

Halcomb, who was Troup’s leadoff hitter this season, was on base more than half the time.

On the mound, Halcomb went 4-1, and he had a spectacular earned run average of 0.438 in the regular season.

Turner hit .471 and had a team-best nine doubles, and he was second to Cameron with 26 RBIs in the regular season.

Turner finished with a 9-1 record, with his only loss coming in the first round of the state playoffs, and he had a 1.68 ERA in the regular season.

“I’ve just been playing (baseball) forever and I love it,” he added. “I (enjoy) everything really, playing with my buddies, the competition, the atmosphere. You kind of forget about everything when you’re on the field.”

One of Halcomb’s favorite memories was when Troup made it to the final four in 2013, and he also enjoyed the team’s experience in the IMG National Classic this spring.

“We made it to the final four as freshmen, me Miles and Winston were starters as freshman and that was pretty fun,” Halcomb said. “The IMG trip down to IMG Academy (in Florida) was a pretty great experience down there.”

Turner is eager to begin his college career, and he figured attending a junior college was the way to go since his options will be open.

After one season, Turner, Halcomb and Upchurch can either remain at Marion, or decide to transfer to another school.

Turner’s goal is to one day play for Auburn University where he would join forces with former teammate Johnathan Foster.

Foster, a catcher, recently wrapped up his freshman season at Auburn.

“I think junior college is a good way to go to try and prepare myself for a four-year school,” Turner said.

Turner said he’s looking forward to beginning his college journey and showing what he can do on that level.

Turner added that he wanted “to thank my parents and all my coaches.”

Upchurch believes he and Turner and Halcomb are heading into a great situation.

Upchurch said one of his favorite parts of being a baseball player at Troup was the friendships he formed.

Of the four signees, none of them improved as much as Upchurch during his time at Troup, and he gave Garner a lot of credit for that.

“Coach Garner, he’s the reason,” Upchurch said. “When I got to Troup, I was really bad, to be honest with you, but he chewed me out a lot, but it was needed, and got me to where I am.”

Garner’s hope is that the time the four men spent in the Troup baseball program has helped prepare them for life after high school.

“These kind of kids are going to be our future leaders one day and I think they, hopefully with the things they’ve been taught from our program, its going to help them be successful along the way — make the right choices, right decisions and through the process of using this game as a tool, I think they’re prepared to take the next step,” Garner said.