It was a year of championships 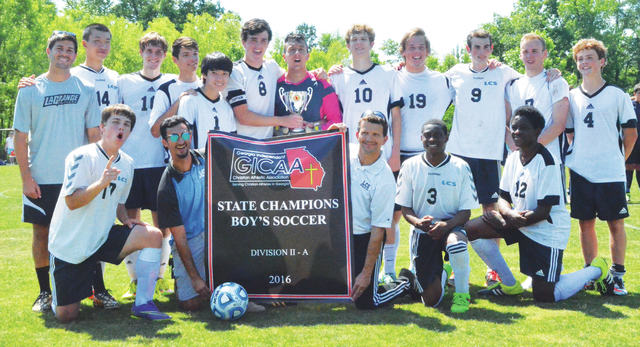 LAGRANGE – What a year it was for Lafayette Christian School.

In between, the boys’ basketball team went unbeaten and won a championship as well.

Here’s a look back at Lafayette Christian’s remarkable 2015-2016 school year.

BREAKTHROUGH: Before the 2015 season arrived, the Lafayette Christian eight-man football team had already established itself as one of the best in the Georgia Independent Christian Athletic Association.

The Cougars made it the state semifinals in 2014 and 2015 before falling short, so they headed into the 2016 season with the goal of reaching the mountaintop in the GICAA.

After winning their first two games in the state playoffs, the Cougars found themselves matched up against Central Christian in the championship game.

The Cougars were confident they would be the team celebrating at the end, and they were right.

The Cougars took over the game in the fourth quarter, and they ended up rolling to a 41-30 victory to claim the school’s first state title in football.

Central Christian came into the game unbeaten, and one of those victories came against Lafayette Christian in overtime, but it was overmatched in the game that counted the most.

The Cougars dominated the game in every area, and they left no doubt about the identity of the best eight-man football team in the state.

“After playing them once, we knew what we had to do,” said senior Sam Marshall. “In the locker room, the coach said, if you do your job, if everybody does their assignment, then we’re going to walk away with the win. That’s really all we did. Everybody played their game, everybody did their assignments. Yeah, there were little (mistakes) here and there, but it was everybody getting down, getting dirty, and getting physical.”

For the seniors, it was an ideal way to wrap up their high-school football careers.

One of those seniors was Eli Shepherd, a linebacker and running back who earlier this spring became the first Lafayette Christian student to sign a football scholarship.

In the title game, Shepherd had two rushing touchdowns, and he was dominant on defense.

“It feels great,” Shepherd said of finishing his career with a state title. “My mission has been completed. Coming in to camp, I said my mission was to win state. That was my main goal, and it’s very special to complete that on this field.”

In 2014, Lafayette Christian’s season ended with a blowout loss in the semifinals, which made the title even more satisfying.

“Especially looking at last year, and having a terrible last game, to end up with this, that’s something special,” Marshall said. “That’s something you can ho back and tell your kids.”

On a veteran team, freshman quarterback Landon Whitley stood tall, and he did a terrific job of running the offense and had a touchdown run.

He had two interceptions, including one that he returned 80 yards for a touchdown, and he also made some big plays on offense.

Reed only played one season of football for the Cougars, and he made the most of it.

“Jemi, I would say he’s the MVP of the team,” Marshall said. “It’s been a huge blessing having him. I love having him on the team.”

“We’re going to lose a lot of seniors,” head coach Nate Shaw said. ” We’ll have to rebuild for next year. But we’re just incredibly proud of our seniors.

CAN’T BEAT PERFECTION: The Lafayette Christian boys’ basketball team didn’t just win a state championship, it did it without losing a game.

With their 60-53 win over North Georgia Christian in the GICAA title game, the Cougars finished with an unblemished 22-0 record.

While the Cougars won most of their games in blowout fashion, they had their share of close games as well, and on each of those occasions they found a way to get it done.

“We had some good teams in our region, and we had two or three games where we won by two or three points, but we didn’t lose a game all season,” Lafayette Christian head coach Jarred Pike said. “You just have to give a lot of credit to the guys. When you have guys that know how to finish off a game, you can’t teach that as a coach. When it’s 30 seconds left and you have to make a shot, you can’t teach that. Luckily we had guys this year that were able to hit those shots.”

The Cougars had plenty of starpower.

Guard Jemi Reed and post player Marcus Mobley were an unstoppable one-two combination, but it wasn’t just a two-man team.

Everyone on the team contributed something, and that included Ross Clifton, who came up big late in the championship game.

“He came down with about two, three minutes left, and he hit a 3-pointer that rolled around the rim, and then dropped,” Pike said. “And the next possession, he comes down and hits another three. All the sudden, it’s clutch time, and he goes and hits two threes back-to-back.”

Reed had 25 points in the title game, and Mobley and Antaveis Sands both had nine points.

Four members of the basketball team, Reed, Sands, Sam Marshall and Clay Kelley, were also on the football team that won a title a few months earlier.

“I think that’s part of our success,” Marshall said. “We’ve really banded together as a team this year. A lot of knew each other from football, so it kind of carried over from there. It’s really good chemistry now.”

MAKE IT THREE TITLES: In thrilling fashion, Lafayette Christian’s boys’ soccer team beat Wesminster Christian School 3-2 to win the state title, and give the school its third championship of the school year.

In an exhilirating, back-and-forth game, Daniel Lee scored as time expired in the first five-minute overtime period, and the Cougars made that lead stand up and they held on for the victory.

Lafayette Christian surged to a 2-0 lead in the first half on goals by Morgan Channell and Clay Kelley, but a determined Westminster team fought back to pull even midway through the second half.

It remained a 2-2 game through the rest of regulation, and for most of the first overtime period.

With moments remaining, the ball was loose in front of the Westminster goal, and Lee got his foot on it and kicked it into the back of the net as time expired.

There was another five-minute overtime period to play, so the Cougars still had some work to do, but they were able to hang on, and when the clock struck zero, the celebration was on.

“They went out and did it,” head coach Shannon Powell said. “They played until the end. From practice one, all the way to now, we’ve been looking at the state championship, always telling them we’re going back, and we’re going to be victorious this time.”

The team competed in the NASP nationals earlier this month, and it did well enough to qualify for the world tournament that will be held in South Carolina beginning on June 24.

One of the leaders of the team is Sierra Cofield, who has signed a letter of intent to join the archery team at Emmanuel College.

Cofield was joined by all of her teammates during her signing ceremony.

With Cofield’s help, the school’s archery program has seen its numbers grow, and it has enjoyed tremendous success.

As Cofield preparts to depart high school, she takes a lot of satisfaction in that.

“It’s nice to watch it get bigger, and just watch the kids grow up,” she said.

FINDING A WAY: The Lafayette Christian girls’ basketball team punched its ticket to the state tournament in dramatic fashion.

“They want to keep winning,” Lafayette Christian School girls’ coach Paula Johnson said. “They weren’t ready to turn in their uniforms. That’s a stepping stone for them. They really pulled through together, they played as a team, and they played hard. They didn’t give up. We can do all things through Christ.”

It helped that the Lady Cougars had Abbey Hudson on their side.

Hudson scored 27 points, with 16 of those points coming in the second half and overtime.

It was another successful season for the program under the direction of head coach Rene Gomez.