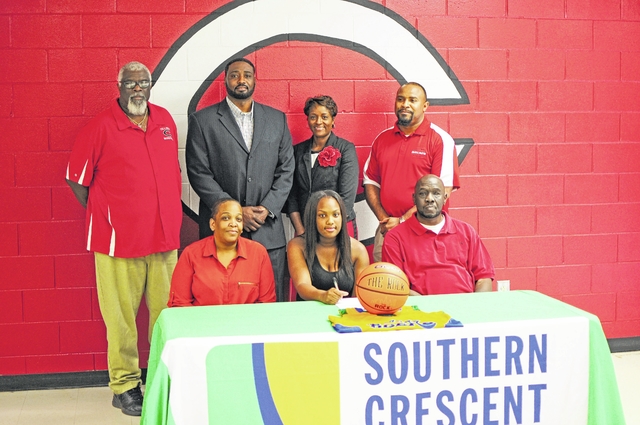 “She wanted to get out there and challenge the guys, we had a gym full of guys, and she was ready to take them on,” he said. “That said a whole lot, that she wanted to go out and compete with the boys.”

That’s one of the reasons he knew she would be a perfect addition to the college’s basketball program, which became official Thursday during a signing ceremony at Callaway High School. Surrounded by family and friends, Johnson became the college’s newest female basketball recruit.

Though it wasn’t the college that came calling to her, she called and requested to become part of the team, said Sinkfield.

“She came and worked out one day, and then a week later she called and said she wanted to sign,” he said.

The occasion was also a landmark for Lady Cavaliers coach Deyano Martin. In the five years he’s been at Callaway High, Johnson is his first player to be signed.

“This will be the first player since I’ve been here at Callaway High, and I hope to have many more after that,” he said. “It’s a big day for me and a big day for the Callaway Lady Cavaliers.”

Martin has been her coach all four years at Callaway, and said she is a good, committed ball player.

“She came on and helped the team a lot,” he said. “She was one of the point guards, she was a scorer. She hustled, gave me everything she had, and I’m happy for her to get this opportunity to go to college and further her education and continue her basketball career.”

While at Southern Crescent’s Griffin campus, Johnson plans to major in sports management and hopes to “make it far from there.”

Sinkfield said Johnson is a good fit and will contribute to the college’s program, adding Southern Crescent is trying to build up its basketball program with young women from small towns who “really like to play the game.”

She admitted she is a little scared about transitioning to college-level challenges, but she knows she’ll make it if she works hard. In fact, the competition level and challenge to make it to championship games drives her, even citing a defeat as her most significant memory from her time as a Lady Cavalier.

“In my ninth grade year we made it to the championships, but came in second, but that was the hardest team we played,” Johnson recalled.

She also thanked her family and coaches for pushing her to become better.

Despite the mild butterflies, Thursday’s signing marked a thrilling new chapter for Johnson.

“I’m feeling great,” she said during the ceremony. “And tomorrow is graduation, so I’m really excited.”