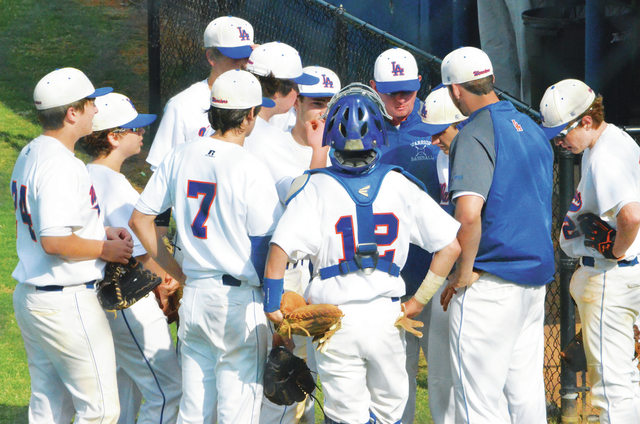 Leah Major and the LaGrange Academy Lady Warriors made it to the state tournament. Kevin Eckleberry | Daily News

http://lagrangenews.com/wp-content/uploads/sites/37/2016/05/web1_LGA-major.jpgLeah Major and the LaGrange Academy Lady Warriors made it to the state tournament. Kevin Eckleberry | Daily News

LaGrange Academy’s seniors helped the basketball team make it to the second round of the state tournament. Kevin Eckleberry | Daily News

http://lagrangenews.com/wp-content/uploads/sites/37/2016/05/web1_LGA-seniors.jpgLaGrange Academy’s seniors helped the basketball team make it to the second round of the state tournament. Kevin Eckleberry | Daily News

LAGRANGE – For two consecutive years, the LaGrange Academy boys’ soccer team was on the doorstep.

As the Warriors took the field in the championship game for a third straight year last fall, they were committed to making sure they’d be the team doing the celebrating this time.

It wasn’t easy, but the Warriors were up to the task.

In a thrilling game, Will Trotter made a goal with less than two minutes remaining to give the Warriors the lead, and they held on from there for a 2-1 victory over a Furtah Prep team that hadn’t lost all season.

That was the top highlight from a successful 2015-2016 sports year for LaGrange Academy’s sports teams.

Here’s a look back:

AT LAST: Winning a championship is always special.

For a group of players who’d come so close before, though, it perhaps meant even more.

“To finally get over the hump, it meant so much, especially it being my senior year,” said Zach Callaghan, who scored 26 goals last season for LaGrange Academy’s championship soccer team. “It meant everything. It was amazing.”

Will Trotter said that’s something the players were thinking about going into the game.

The Warriors reached the quarterfinals of the GISA state tournament before falling to First Presbyterian, with Moreman scoring 24 points and pulling down 27 rebounds.

When it was over, LaGrange Academy head coach Britt Gaylor held his final post-game meeting of the season with the players, including the five seniors.

“That was my first senior class playing four years for me,” Gaylor said. “It was a lot of real good relationships I had with guys in that room. It was tough. I hate it for them. But like I told them afterward, we define success as the relationships we build, and if we left everything out there. And we did. We gave everything we had, pretty much the entire season. It was a successful year from that end.”

One of those seniors was Moreman, who delivered quite a parting shot with his dominant performance.

“He kept us in the game,” Gaylor said. “Lincoln (Anderson) and Will (Trotter) got in foul trouble. That took some of our scoring away. Whit just was rebounding everything that went up. He scored 24, and they were all tough baskets. He put everything together in that game. It was fun to watch.”

The success the Warriors enjoyed was especially satisfying considering they didn’t make it to state the previous year after losing in the quarterfinals of the region tournament.

“To me it’s a big deal,” senior Colby Heath said. “It’s a huge accomplishment, especially after last year, losing in the region tournament.”

LaGrange Academy’s girls’ basketball team, which had to replace every starter from the 2014-2015 team that made it to the state quarterfinals, struggled for much of last season.

The Warriors steadily improved, though, and they played their best basketball at the close of the season and they ended up returning to the state tournament.

Head coach Mike Petite said the work ethic of the players made the difference.

HOME AGAIN: For the second straight year, LaGrange Academy’s baseball team finished second in its region to earn the right to host a state-playoff series.

The highlight of the season came when LaGrange Academy beat Brandon Hall 6-5 in a one-game playoff to determine the region’s second-place team.

“That was a big win, beating Brandon Hall,” senior Zach Callaghan said. “It was definitely a big win for us. We hosted last year, and that was the first time we’d hosted state in a really long time. To come back and do it again this year was big, especially with only having nine guys on the team. And one’s an eighth grader, and a couple of guys haven’t really played that much.”

The Warriors were led by their five all-region seniors, including seniors Callaghan, Colby Heath and Payton Barr, as well as Nick Keating and Mason Brown, who will return next season.

Wilson, the number four seed from Region 1-AA, won two matches to make it to the semifinals where he lost to Milos Orlovic of Furtah Prep, who went on to claim the state title.

Wilson upset Region 3-AA champion Clay Wells of Grace Christian in the first round before beating Tom Waller in the second round to make it to the final four.

In doubles, Kevin Gordon and Franco Feria won a match at state to make it to the second round.