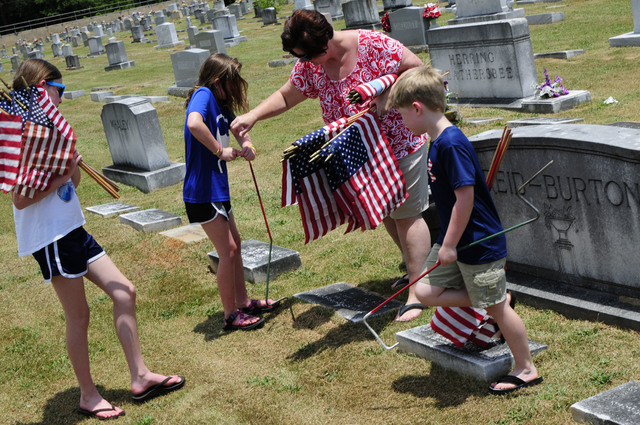 The Woody family, from left, Aaron Woody, Olivia, 10, Paige Woody and Charlotte, 7, place a flag at a veteran’s grave in Shadowlawn Cemetery on Sunday.

Jackson Parmer, 7, holds a bundle of flags while his sister, Lily, 9, uses a rod to make a hole in which to place it on a veteran’s grave in Shadowlawn Cemetery on Sunday.

http://lagrangenews.com/wp-content/uploads/sites/37/2016/05/web1_web0530Flags03.jpgJackson Parmer, 7, holds a bundle of flags while his sister, Lily, 9, uses a rod to make a hole in which to place it on a veteran’s grave in Shadowlawn Cemetery on Sunday.

The Parmer family, from left, Emma Frances, 11, Lily, 9, Cindy Parmer and Jackson, 7, place a flag at a veteran’s grave in Shadowlawn Cemetery on Sunday.

LaGRANGE — Many of the people who came to place flags on the graves of veterans at Shadowlawn Cemetery on Sunday were teaching the younger generations to honor the veterans’ sacrifices.

“We know that these people died for our freedom,” said Cindy Parmer, who was at the cemetery with her children. “… We were able to go to church this morning, to the church we chose, because of them.”

Parmer said it was her first time coming out to place the flags on graves, but her daughter Emma Frances, 11, had previously participated as part of Girl Scouts.

Placing the flags on the veterans’ graves is important “because they served in the armed forces for us, for our freedoms,” Emma Frances said.

Her younger siblings, Lily, 9, and Jackson, 7, also helped out. The family browsed among the gravestones, looking for those that indicated they were veterans. When they found one, they used a rod provided by members of the West Georgia Veterans Council to make a hole and placed a flag, also provided by the council, to mark it.

The Parmers weren’t the only family out at Shadowlawn, which was one of four cemeteries in Troup County where the WGVC was providing flags and asking volunteers to place them.

Paige Woody, youth director at First Presbyterian Church, said she brings a group out to place flags every year and has done so the past seven or eight years.

Along with youth group members, Woody had her family out placing flags as well — her husband, Aaron, and children Charlotte, 7, and Olivia, 10.

The Elkins family came out Sunday to participate in the event for the first time.

“This is Memorial Day weekend, and we’re putting up these flags to recognize the veterans for their service,” said George Elkins. “Of course, they gave their all to us and this opportunity — all of them did.”

Elkins said he had an uncle who died in World War II, but placing the flags was just a general sign of respect he felt the family should show to the late veterans in the cemetery.

His wife, Helen, said she had some uncles in the service, but also that placing the flags was something that was overdue.

“I just think it was the thing to do,” she said. “I’d never been out here, and I just thought it was high time.”

Their daughter, Lindsey Elkins, joked she was “guilted into it,” causing her father to say that millennials don’t have the same personal connections as those of he and his wife’s generation. He was in high school during the Vietnam War and eligible for the draft. Although he wasn’t enlisted, he had classmates who were.

“It’s closer to home for them than it is for me,” Lindsey Elkins said, more seriously. “But it’s definitely important.”

The flags are set to remain on the graves until Tuesday, when the veterans council asks volunteers to help pick them up at 9 a.m.