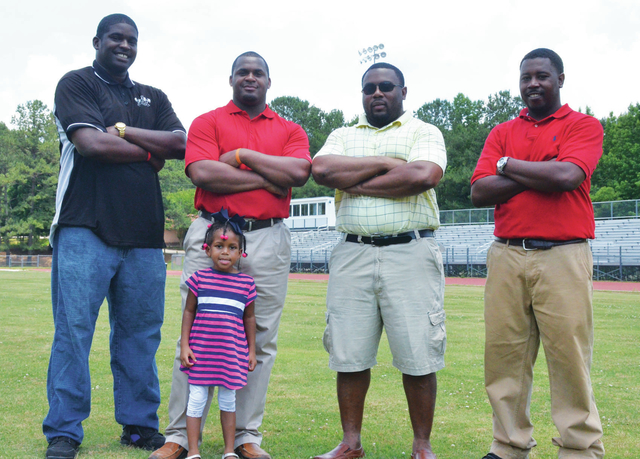 Former LaGrange High standouts Brandon Kelley, DeMoreo Ford (with his daughter Riley), Travis Hart and Thad Todd will be among the instructors for the TH2 Elite Football Camp coming in July. The camp will be held at the Whitesville Road stadium. Kevin Eckleberry | Daily News

http://lagrangenews.com/wp-content/uploads/sites/37/2016/05/web1_camp-1.jpgFormer LaGrange High standouts Brandon Kelley, DeMoreo Ford (with his daughter Riley), Travis Hart and Thad Todd will be among the instructors for the TH2 Elite Football Camp coming in July. The camp will be held at the Whitesville Road stadium. Kevin Eckleberry | Daily News

In July, those six players will be a part of a star-studded group of instructors for the first-ever TH2 Elite Football Camp.

The camp will be held on July 15-16 at the Whitesville Road football stadium, and it’ll be for players ages 10 to 18.

The list of instructors reads like a who’s who of former prep football stars in Troup County.

In addition to Hart, Ford, Todd, Blackmon and the Kelley brothers, former LaGrange High standouts Qua Huzzie will be on hand, and he is serving as the camp director.

Also helping out will be Troup High graduate Chris Burnette, who was a three-year starter on the offensive line at the University of Georgia.

Quantavius Leslie, a Callaway High graduate who was a wide receiver at LSU, will also serve as a camp instructor.

Todd, who was the starting quarterback on the 2003 and 2004 teams that won back-to-back state championships, said he was happy to help out.

“We’d talked about trying to get something like this going,” Todd said. “When (Hart) called me, I didn’t have to think about it at all.”

Todd said he’s looking forward to being on the field with his friends and former teammates.

“We still keep in touch,” Todd said. “But actually getting back out on the field together, I’m sure we’re all excited. We’ll talk about some old memories.”

Hart, who teamed with Blackmon to create an intimidating and unstoppable duo at linebacker at LaGrange, wants to make sure it’s a meaningful experience for all of the players involved.

He said the first day will be all about instruction, and on the second day the players will get a chance to compete in seven-on-seven games.

Hart said Big Peach Prep Recruiting will be on hand to give the players feedback on their performance in the drills.

“They’re a recruiting service, and they’ll be here so the guys can get the results from all of the drills that we do, and they can send them off to the school,” Hart said. “That’ll be our big key, and that’s free.”

Huzzie, a linebacker who left LaGrange as the program’s all-time leading tackler, said the camp is a great way for he and some other former prep players in Troup County to lend a hand.

Huzzie was a successful college player at Kentucky and Murray State, and he led a professional team to a championship during his one year playing in Finland.

Hart said the camp is not just about football, but it’s also about trying to help out the community.

“We need to do it sooner than later, because we’ve got too many of our kids going the wrong way,” Hart said.

Hart said he’s hoping to get some local teams involved in the camp.

“We’ll reach out to all the high-school coaches this week, and make sure they have a chance to come over and participate, especially in the seven-on-seven,” Hart said.