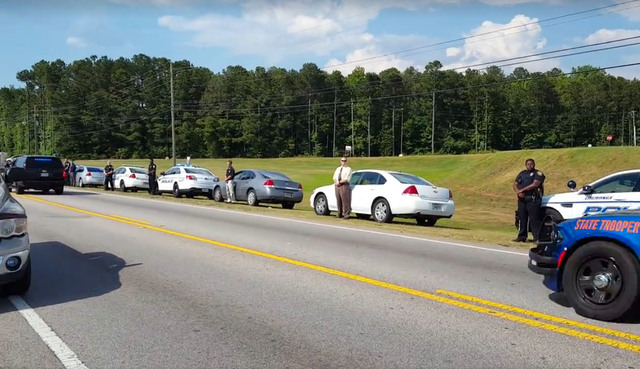 According to the post, the agencies were escorting home Harris County deputy Jamie White. He was shot just above the left eye during a traffic stop between Hamilton and Pine Mountain on Interstate 185 on Saturday evening, according to previous reports. White was treated at Columbus Medical Center.

A gofundme page was setup Monday for Jamie White by Tami White, identified in the gofundme page as the deputy’s wife and a paramedic. The page seeks $25,000 to help the family as Jamie White recovers from the shooting.

The gofundme page is located at https://www.gofundme.com/273rymc and anyone may donate. As of this morning, the site showed a total $15,730 in donations by 104 people collected in one day.

The man accused of shooting White is being held without bond after he turned himself in to Phenix City, Alabama, police the day after the shooting. Joe Lee Garrett, 24, of Phenix City faces charges of aggravated assault on a police officer, possession of a firearm by a convicted felon, obstruction, possession of a firearm during a felony, and fleeing and attempting to elude.

White took Garrett’s driver’s license and spoke with Garrett and the front seat passenger for about seven minutes before Garrett pulled out a gun and shot White above the left eye, Jolley has said. Once White was shot, Garrett exited the vehicle, got his license and drove away.

Two women were passengers inside the 1994 blue Chevrolet Caprice that Garrett was driving, one in the front seat and the other in back, Jolley said. The car was caught on the deputy’s dash cam video.

Police in Russell County, Alabama, arrested Lytishia Horace on Sunday in connection to the shooting. Authorities were still searching for the other passenger.

The Associated Press contributed to this report.