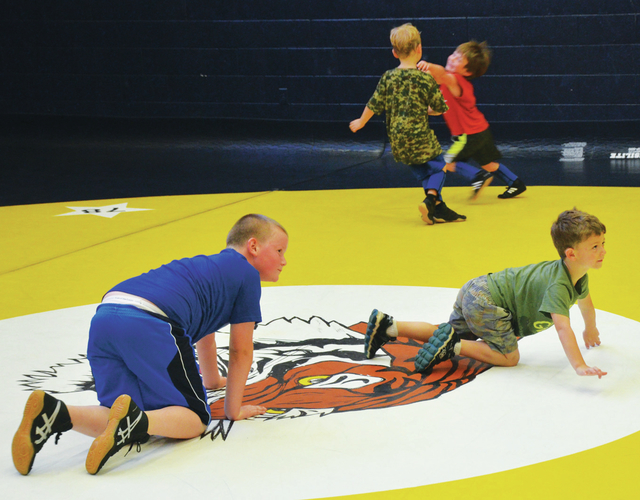 A youth wrestling program has been started at Troup High under the direction of Drew Garner, and a handful of young wrestlers come out for practice every Tuesday and Thursday. Last weekend, five of the team’s wrestlers returned home with medals after faring well in a tournament. Kevin Eckleberry | Daily News

http://lagrangenews.com/wp-content/uploads/sites/37/2016/06/web1_wrestling1.jpgA youth wrestling program has been started at Troup High under the direction of Drew Garner, and a handful of young wrestlers come out for practice every Tuesday and Thursday. Last weekend, five of the team’s wrestlers returned home with medals after faring well in a tournament. Kevin Eckleberry | Daily News

The wrestlers take advantage of some free time at the end of practice on Tuesday. Kevin Eckleberry | Daily News

http://lagrangenews.com/wp-content/uploads/sites/37/2016/06/web1_wrestling3.jpgThe wrestlers take advantage of some free time at the end of practice on Tuesday. Kevin Eckleberry | Daily News

LAGRANGE – The wrestling room at Troup High was hopping on Tuesday evening.

Nearly 10 wrestlers were hard at work, soaking in as much knowledge as they could under the direction of a handful of dedicated coaches.

These weren’t high-school wrestlers, though.

A new youth wrestling program kicked off last month, with youngsters from the ages of 3 to 11 coming out on Tuesdays and Thursdays to practice for 90 minutes in a room that for decades has been the home of one of the state’s most tradition-rich programs.

Drew Garner, a former state-champion wrestler at Troup who is coordinating the youth program, said it has been extremely well-received so far, and that the young wrestlers are having a great time.

“We have parents saying, Monday, Wednesday and Friday, my child doesn’t even want to get out of bed,” Garner said. “But when Tuesday and Thursday rolls around, that’s all he’s worried about is getting to practice.”

Garner said there have at times been more than 20 wrestlers at practice, although participation was a bit down on Tuesday since a lot of families are away on vacation.

“At one time, I think we had 22 youth kids in the room,” Garner said. “We’re competing against summer baseball, tavel teams, and vacations. We’re averaging somewhere between 12 and 15 kids every practice.”

There is a lot of teaching involved.

Most of the participants had limited wrestling knowledge coming in, so Garner and the other coaches haven’t tried to teach them everything in the first few months.

For the moment, the fundamentals of the sport will do just fine.

One thing each of the wrestlers get is plenty of individual attention.

During Tuesday’s session, there was nearly one instructor for every wrestler.

While that ratio had a lot to do with the limited turnout, Garner said that even when the room is packed there are still plenty of coaches to go around.

“That’s why we’ve got nine or 10 coaches,” Garner said. “Our goal is to try to have at least one coach for every two kids.”

Garner said the improvement shown by the wrestlers so far has been impressive.

“Compared to where we are, two months after the fact, it’s night and day what kind of progressions are being made,” Garner said.

How much progress some of the wrestlers have made was on display last weekend during a tournament.

For most of the wrestlers, it was their first time being involved in a competitive match, but that inexperience wasn’t a detriment.

“Out of the seven, five of them that was their first time,” Garner said. “It was a national caliber tournament in terms of skills.”

Of those seven wrestlers, six of them ended up placing and earning a medal, and every one of them finished fifth or higher.

“The main reason we wanted to take them to that tournament was just to see where our first-match wrestlers stood against tough competition,” Garner said. “It’s a confidence booster, and that’s what we were trying to do. Our goal was to place five kids, and we ended up placing six.”

Garner, who also helps out with the high-school team during the season, said it has been a blast working with the young wrsetlers, who are so enthusiastic and willing to learn.

“I love our high-school guys, but these kids, it’s something else,” he said.

Garner said it’s beneficial to get the wrestlers when they’re young and provide them with a solid foundation in the sport, and that’s what he and the other coaches are trying to do.

“You teach a kid the right way of doing something now, you don’t have to go back and fix it later,” Garner said.

OF NOTE: The Troup youth wrestling program meets every Tuesday from 5:30 p.m. to 7 p.m. in the Troup High wrestling room, which is located in the school’s gymnasium. There is no charge, and wrestlers of all skill levels are welcome. For information, call Drew Garner at (706) 523-2929, or email him at drewgarner03@gmail.com