Mobley ready for ‘next level’ 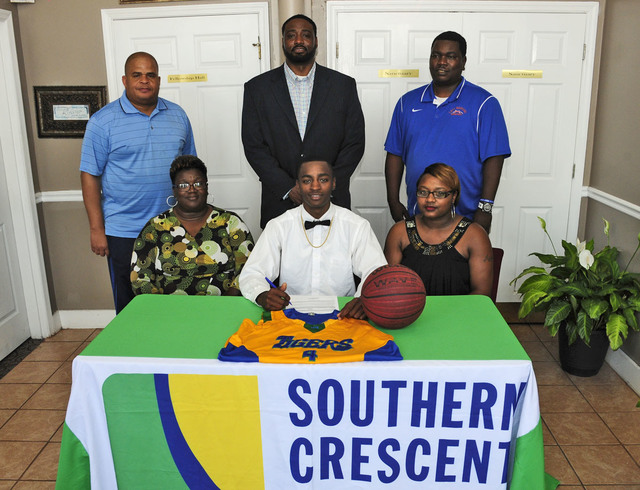 LaGRANGE — Marcus Mobley is ready to step up his game.

The recent Sound Doctrine Christian Academy graduate said he was looking forward to moving up after he signed with Southern Crescent Technical College last week.

For Vacher Hammett, boys’ basketball director for the LaGrange Warriors Elite travel team, it was a proud day.

“He’s just like a son to me, like a brother to my daughters, a son to my wife,” Hammett said. “My wife actually taught him at Gardner Newman (Middle School), that’s how I came into contact with him. It’s just a proud day, proud day.”

Hammett started coaching Mobley as an eighth grader at Gardner Newman and continued after Mobley joined the Warriors.

Mobley entering college is the end goal that Hammett said he and the teen’s mother, Carol Mobley, worked toward since he was young.

His mother worried he might fall in with the wrong crowd, but the coach helped set goals and structure for him in basketball, helping achieve their goal.

“We had a plan for him to go to college. It didn’t matter what college he went to, we wanted him to go to college,” Hammett said. “Through friends that are in the college game, we got a connection with coach (Calvin) Sinkfield (at Southern Crescent), and I took Marcus up to (the campus in) Griffin to work out. And coach Sinkfield said the same thing that I saw in him, he was a good kid.”

Mobley shows a great sense of loyalty to his team and watches out for his teammates, Hammett said. He recalled a two-week trip the team took to Myrtle Beach, South Carolina, where Mobley helped out his peers who didn’t have the resources to support themselves that long.

“I could depend on him to be self-sufficient, mature, very respectable and a hard worker,” Hammett said.

Mobley also played post with the Lafayette Christian School Cougars the past two years while at Sound Doctrine, which has an agreement to allow its students to play on LCS’s athletic teams, and was on the team that won the GICAA title game this year.

The Cougars finished with an unblemished 22-0 record.

The Sound Doctrine graduate pointed to that victory as one of the highlights of his time as a basketball player.

He thanked his family and friends who continually pushed him to make sure he continued to do well. With that encouragement, he’s ready to tackle “stepping up and being a man” when he goes to college.

“I’m ready to compete at the next level,” he said, nonchalantly.