It’s the next step for Moreman 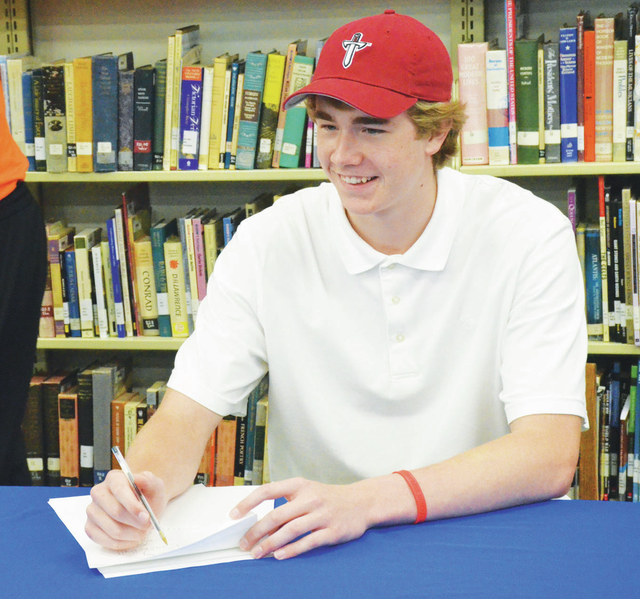 A lengthy recruiting process came to an end for Whit Moreman when he signed with Troy. Kevin Eckleberry | Daily News

http://lagrangenews.com/wp-content/uploads/sites/37/2016/06/web1_Moreman1.jpgA lengthy recruiting process came to an end for Whit Moreman when he signed with Troy. Kevin Eckleberry | Daily News

LAGRANGE – He went down fighting.

In the final game of his high-school basketball career, LaGrange Academy’s Whit Moreman delivered a monster performance in the second round of the GISA state tournament.

Facing First Presbyterian, Moreman scored 24 points and pulled down 27 rebounds in a 67-53 loss.

“He single-handedly kept us in that game,” LaGrange Academy head coach Britt Gaylor said. “It wasn’t just his scoring and rebounding, it was his effort, too. That’s the thing about him. I’m excited to see him take that same passion, and that same energy to the next level.”

While the 6-foot-9 Moreman didn’t put up those sorts of numbers every game, he was a dominant player throughout his senior season, so it was no surprise that he had plenty of options when it came time to choose a college.

He waited until about two weeks ago to make his decision, and he’s happy with it.

Moreman has signed a letter of intent to play basketball at Troy (Ala.) University, and he’ll be joining the team for the 2016-2017 season.

“You have to find the right fit,” Moreman said. “And it felt like home. My brother goes there, so that helped too. And both my parents went there. There were a ton of junior colleges that I talked to. But Troy was the best fit.”

Moreman attended LaGrange High for his freshman and sophomore seasons before transferring to LaGrange Academy for his junior and senior years.

It was a smooth transition.

“It was a lot of fun,” Moreman said. “Two of my best friends are here, and I made a lot more friends. And coach Gaylor, I’ve known him probably since the fifth grade with all the basketball camps. It’s been a lot of fun.”

Gaylor remembers working with Moreman at a LaGrange College youth camp, and even then he knew he had the potential to be a big-time player.

After transferring to LaGrange Academy, Moreman had a big junior season, although the team didn’t make it to the state tournament.

As effective a player as Moreman was as a junior, Gaylor felt like he could be even better as a senior, and he was.

Gaylor said Moreman’s biggest improvement came on the defensive end of the floor.

“The biggest leap he made from last year to this year, was defense,” Gaylor said. “When he got here, he could score, but he really improved on the defensive end. He lived in foul trouble the year before. This year, he positioned himself well. He learned to not over-extend on blocking shots, but also affecting a lot of shots. He became a really good defender this past year, and an elite rebounder. That was fun to watch him grow in that area.”

While the level of competition will obviously be considerably higher now, Moreman believes he is ready.

Through his time in high school and playing travel basketball, he has gone up against plenty of other top-notch players, so he doesn’t feel like he’ll be overwhelmed by the transition to the college game.

While Moreman won’t begin school until the fall, Moreman said he’ll head to Troy next month to help get adjusted.

“I’m probably go up in July and play some pick-up games with the basketball team,” he said.