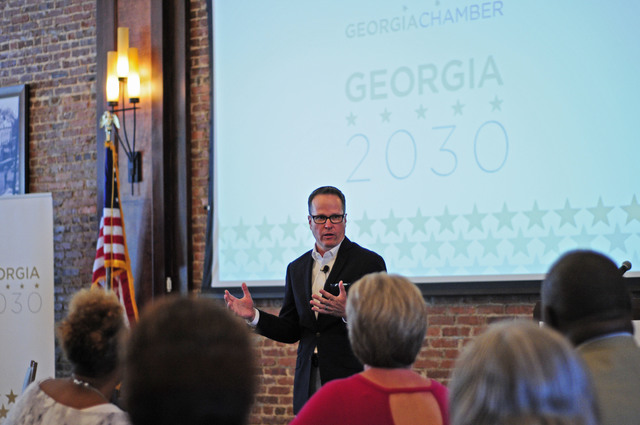 Chris Clark, Georgia Chamber president and CEO, speaks to a group of area business and governmental leaders on Thursday inside Del’Avant event center for the Georgia 2030 initiative.

http://lagrangenews.com/wp-content/uploads/sites/37/2016/06/web1_0603Georgia2030-1.jpgChris Clark, Georgia Chamber president and CEO, speaks to a group of area business and governmental leaders on Thursday inside Del’Avant event center for the Georgia 2030 initiative.

Chris Clark, Georgia Chamber president and CEO, speaks to a group of area business and governmental leaders on Thursday inside Del’Avant event center for the Georgia 2030 initiative.

http://lagrangenews.com/wp-content/uploads/sites/37/2016/06/web1_web0603Georgia2030-1.jpgChris Clark, Georgia Chamber president and CEO, speaks to a group of area business and governmental leaders on Thursday inside Del’Avant event center for the Georgia 2030 initiative.

LaGRANGE — The population in Georgia needs to grow its economy by 40 percent by 2030 to accommodate nearly 2 million new people, according to the state Chamber of Commerce, and it is seeking local communities’ feedback on how it should help accommodate that growth, said the state’s top Chamber official.

Chris Clark, Georgia Chamber president and CEO, spoke to a group of area business and governmental leaders on Thursday inside Del’Avant event center for the Georgia 2030 initiative. The aim of the program is to gain input to see where communities feel economic and educational priorities should be.

“We’re going to focus on the future, and we’re going to ask your help in a conversation we’re leading around the state about the direction and what you want to see and how we’re going to grow Georgia in the next several years,” Clark said.

During his presentation, Clark said Troup County will likely see about a 10,000 population increase by 2030 with about 50,000 expected in the region. Statewide, the Chamber expects 1.9 million new residents who will fill more than 1 million jobs. To keep up, the state needs to add more than 14,000 jobs and replace more than 45,000 jobs.

A big factor for job replacement is about 35,000 people in the “baby boomer” generation, about 15 percent of the population, who are expected to retire. That will also mean an increase in the cost of social programs.

Having a vibrant community where people can thrive is one of the biggest ways to attract young people to a community, Clark said.

“If you want to be successful, this needs to be part of your strategy,” Clark told the crowd.

Clark took a live, online poll of the audience, asking a range of questions about priorities and factors that audience members felt hurt or helped the community, employers and employees.

At the end of the poll, all attendees were asked to state what they believe the top priority should be to improving the economy. Education was the most popular answer, with workforce development, poverty, race and transportation other high-ranking focuses.

Demographically, according to the live poll data, the majority of the audience was white, conservative and over 40 years old. It was almost evenly split between men and women.

On what issues poll takers wanted to see elected officials prioritize, economy and job creation topped the list, followed by education, workforce and healthcare over social issues and transportation.

Factors poll takers overall felt were most important to attract employees were quality of life, and affordable and safe communities. They also felt having a qualified and skilled workforce was the biggest factor to growing the state economy, followed by affordable taxes and incentive, and quality of life.

Most attendees felt increasing the state minimum wage, frivolous lawsuits and dealing with the IRS were factors that hindered businesses, while improving soft skills training for future employees was one of the biggest factors for developing a future workforce and education. Most felt it was hard to find employees who would show up on time and work hard enough.

Public services provided by nonprofits was the number one solution most attendees felt would reduce poverty while welfare expansion and direct subsidies like individual tax breaks would be least effective. Lack of a family structure also topped the list of poverty factors, followed by lack of education and substance abuse.

On race issues, the group was split on whether minorities face systemic hurdles to “move up the economic ladder.” They also felt businesses need to lead in advancing dialogue about race and discrimination.

For water needs, the majority of the group felt planing and adding reservoirs would be most effective, followed by water quality and drought management.

Promoting wellness model programming for businesses would be most effective to providing more quality healthcare, most poll takers said, while a state-specific medicaid expansion was favored over federal expansion under the Affordable Care Act.

Advanced manufacturing was top priority for most poll takers on what the area needs to attract new jobs, followed closely by automotive jobs. They also felt the state’s priority on transportation should be fixing existing roads and bridges over building new or investing in public transit or commuter rails.

Anyone who wants to take the poll may do so at www.gachamber.com/georgia2030/