They’re getting an opportunity 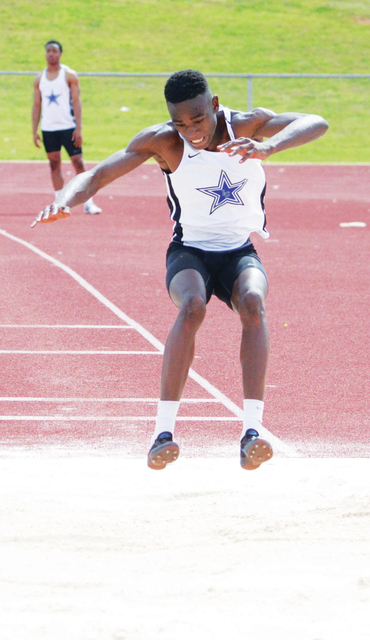 With Jeremiah Wright looking on in the background, Tobias Spence competes in the triple jump at the region meet. Spence is heading to Cardinal Stritch University in Wisconsin on a track scholarship. Kevin Eckleberry | Daily News

http://lagrangenews.com/wp-content/uploads/sites/37/2016/06/web1_track-spence2.jpgWith Jeremiah Wright looking on in the background, Tobias Spence competes in the triple jump at the region meet. Spence is heading to Cardinal Stritch University in Wisconsin on a track scholarship. Kevin Eckleberry | Daily News

LAGRANGE – For LaGrange High graduate Tobias Spence, traveling to another part of the country is no big deal.

So as he prepares to head to Milwaukee to attend Cardinal Stritch University on a track and field scholarship, there is no nervousness, just an excitement and an eagerness to get the journey started.

“I love to travel,” Spence said. “I’m a military baby, so I’ve been traveling all my life. I’m ready to get up there.”

Spence is one of a number of former LaGrange High track athletes getting a chance to compete on the collegiate level.

Ten former Grangers, Spence included, are set to participate in a college sport.

That’s gratifying for LaGrange High coach Nick Griffin, who is thrilled to see so many of his former students get this chance.

“I appreciate everything they’ve done in practice,” Griffin said. “And they’re getting a chance to go to college. That’s the big thing, is getting out.”

Spence embarks on his college journey after a stellar high-school career.

He’s a versatile athlete who competed in five events last track season, but the high jump is his speciality.

Spence own the school record in the high jump of 6-foot-6, and he believes he’ll only continue to improve.

“In high school, it was almost like you train yourself,” Spence said. “Now I’ll have a coach that will focus (on the high jump), and I’ll have weight training up there. And I’ll be the only jumper. So I’m just going to get better and better. That’s really what I’m ready for.”

His goal is to step in as a freshman and win a NAIA national championship.

“I know I’m going to get better,” he said. “I should win nationals. I’m looking forward to winning it every year that I’m there. You have to work hard. I will.”

Jeremiah Wright signed a football scholarship with Clark Atlanta University in February, and he’s hoping to get a chance to participate in track and field as well.

Wright was a busy man last spring, participating in five events, including the long jump, triple jump, shot put, as well as a handful of running events.

“Jeremiah and Tobias only did two events (in 2015),” Griffin said. “And this year, they did five. Jeremiah even threw the shot put for us. It was his first year ever. And the same thing with Tobias doing the long jump and the triple jump. He didn’t do either of those last year.”

Another former Granger getting a college shot is Eric Tucker, whose speciality is the long jump and the triple jump.

“Coach Griffin put my name out to some different schools,” said Tucker, who is going to Union College in Kentucky. “They contacted me. I talked to the coach, and he said he liked me, and he said he could get me a scholarship. So he did. I’m very excited. I’m ready to go.”

Four of the former Grangers are headed to Prince George’s Community College in Maryland.

Among that group is Kd McCauley, who excelled in the hurdle events, as well as Jacaris Johnson and Reggie Johnson, who were both multi-sport standouts at LaGrange.

Johnson will also get an opportunity to play soccer at Prince George’s.

Also heading to Prince George’s is Mike Snead, and Red Banks is going to Columbus State as a walk-on.

Keaote Davis, a standout in the discus and the 100-meter dash who also excelled in football for LaGrange, is going to Huston-Tillotson College in Texas.

All of those men helped LaGrange enjoy a lot of success over the years.

LaGrange won a region championship in 2015, and it placed third in the region this year.

“Last year, we set the bar high for ourselves, that we’re going to win region again,” Griffin said. “We didn’t. We came in third this year. But we came in third with a way smaller team than last year. We were smaller by almost 15 guys. We made it the whole season with 24 guys.”