Another Superstar camp in the books 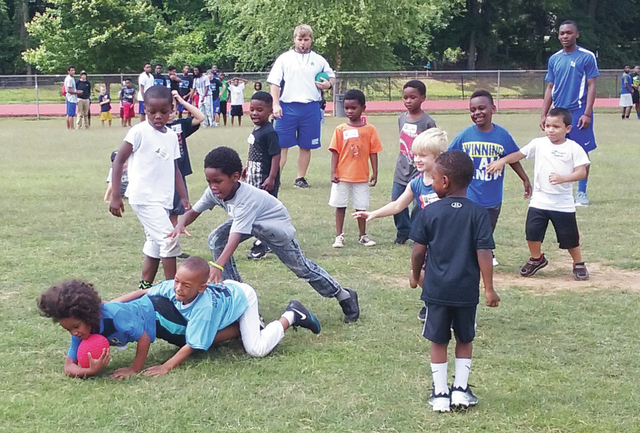 The participants in the West Georgia Superstar Football Camp were able to put what they learned to the test at the close of Saturday’s camp session when they participated in a scrimmage. Kevin Eckleberry | Daily News

http://lagrangenews.com/wp-content/uploads/sites/37/2016/06/web1_camp4.jpgThe participants in the West Georgia Superstar Football Camp were able to put what they learned to the test at the close of Saturday’s camp session when they participated in a scrimmage. Kevin Eckleberry | Daily News

Some of the young football players have a good time running a play during Saturday’s camp session. Kevin Eckleberry | Daily News

LAGRANGE – It’s an opportunity Smokey Hodge would loved to have had when he was a youngster.

The 24th West Georgia Superstar Football Camp wrapped up on Saturday at the LaGrange College practice field, and the star-studded group of instructors featured former college and professional players, including a three-time Super Bowl champion, as well as a former number one pick in the NFL draft.

Hodge, who was a standout player during his time at Auburn, has been helping out at the camp for more than 10 years, and he said it’s an outstanding chance for the campers to learn from some greats of the game.

The camp began on Friday afternoon, and it wrapped up Saturday morning, with all of the campers getting to wear their complimentary T-shirts while they ran around on the LaGrange College practice field.

The camp was created by Ruben Hairston, a LaGrange native who went on to play football on the college and pro level.

Hairston said the camp was started as a way to make a positive impact on the lives of young people in the area, and that mission hasn’t changed.

“That’s our main goal, is to touch a few lives,” Hairston said. “We know we’re not going to touch all of them, but if we can touch a few and make a difference, that’s what matters.”

While there were a handful of first-time instructors helping out this year, most of the men tasked with leading the camp have been helping out for years.

All Hairston has to do is let them know when the camp will be, and they circle those dates on their calendars.

One of those men who comes every year is Hodge, who was a part of some special teams at Auburn, including the one in 1988 that went 10-2 and won the SEC title.

Hodge said his commitment to the camp grew when his former teammate at Auburn, Nate Hill, died in 2007 at the age of 41.

“Especially after Nate died, I made a pact that if I’m able, I’ll be back, I’ll be out here,” Hodge said.

One of the new coaches this year was Dabias Scott, who is part of a charitable organization in West Point called “All for good of Man.”

When Scott was asked to participate in the camp, he eagerly accepted.

For most of the camp’s history it has been held at Callaway Stadium, but it was moved to LaGrange College this year.

While the move was necessitated because of work being done at Callaway Stadium, the change of venue worked out nicely.

Aundray Bruce, who has been helping out as a camp instructor for more than 10 years, said it was nice walking around on natural grass, as opposted to the artificial turf at Callaway Stadium which can get a big warm.

“You’re not out on that artificial surface where the heat is just coming up,” Bruce said. “The grass is much better.”

Hairston said he was grateful to have a fall-back option with the stadium unavailable.

“We appreciate them letting us use their facilities,” Hairston said.