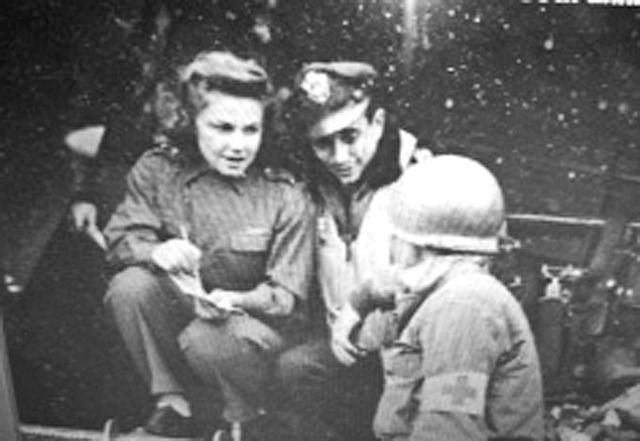 Ethel Guffey Simpson is shown in this undated photo on a plane as she served as a nurse in World War II.

http://lagrangenews.com/wp-content/uploads/sites/37/2016/06/web1_0606SimpsonCOL.jpgEthel Guffey Simpson is shown in this undated photo on a plane as she served as a nurse in World War II.

This is the story of Ethel Guffey and her incredible journey. A journey that started on her family’s dairy farm in Shawnee, Oklahoma, and ended with her involvement in the largest air, land and sea battle in history. It became a significant turning point in World War II — D-Day.

This is a story about my mom.

In September of 1935, at age 19, Mom entered Saint Anthony’s School of Nursing in Oklahoma City.

She later entered the U.S. Air Force at Will Rogers Field in Oklahoma City in March of 1942.

The next month she was indirectly involved with a piece of history. While working a 12 hour nursing shift, she learned that the officer that she was taking care of, Col. Hume Peabody, was to have flown on a raid in which legendary flier Jimmy Doolittle led 16 Army B-25 bombers through Japanese defenses on April 18, 1942.

The strike on Tokyo, and other cities, was a huge boost for American morale. After the raid, the pilots who had taken part in the raid came to Col. Peabody’s room to share their experience. That visit, including the presence of mom — Ethel Guffey — would be re-created decades later in a movie about the war.

On Christmas Eve 1942, she arrived at the train station in Louisville, Kentucky. From there, she and eight other nurses rode in a truck to Bowman Field to report for duty.

She graduated from the School of Air Evacuation on Feb. 18, 1943. There she had learned to march and lead a parade of military personnel on the base. She was the first nurse to ever lead other nurses in a parade.

On July 27, 1943, she, along with the 806th Air Evacuation Squadron, arrived at Liverpool, England. From there they rode by train to Welford Park, England. They later became attached to the 9th Air Force.

In the fall of 1943, while assigned to “detached service” duty, she was assigned to the 390th Bomb Group, which was eight miles from The English Channel. While there, she helped flight surgeons take care of the wounded to get them ready for the 30 mile trip to the nearest hospital.

They had been wounded while on bombing missions over Germany. Mom remembered one serviceman in particular. The back of his head had been blown off during a mission. However, he was still able to talk.

He said, “I’ll never get to see my baby.” Those were the last words he spoke before he died.

On June 6, 1944, in Grove, England, Mom was leading a short order marching drill. It was during that drill that she and the other nurses in her unit saw planes returning from the Normandy Invasion.

A few days later, she and The 806th Air Evacuation Squadron landed on a hospital landing strip to evacuate the wounded that had been brought to the strip. Large balloons were positioned high above the landing strip to keep German fighters from strafing the area. The wounded were then flown across the English Channel.

The evacuation of those wounded at Normandy went on for about a month.

My mother felt that the more she talked to her patients the more they would talk. And talking seemed to help them cope with their situation.

Lt. Ethel Guffey, my Mom, the farm girl from Shawnee, Oklahoma, was made a captain before returning home from the war.

On Saturday, May 29, 2004, The World War II Veterans Memorial was dedicated in Washington, D.C., to the veterans of “The Greatest Generation.” They were thanked for their service that “helped save the world.”

Seventy-two years ago she sealed her place in history.

Some notes from my daughter’s, Collins’, flight with my mother from San Antonio, Texas, to Charlotte, N.C., for burial.

The following are messages Collins sent to family while on the flight:

“The way the pilot and airline responded was through the roof. There were “USA!!! Moments that warm the heart!”

“We just landed in Atlanta. I thanked the pilot for our family. They handled the precious cargo with care! Just handed info directly to pilot in Atlanta. He said, ‘Ma’am, I’m sorry for your family’s loss. We’ll get her home.’

“Flight attendant just came and told me the pilot Googled her and saw her picture on a website called “Legends of WWII.” Then the pilot just came to my seat to tell me he went downstairs to look himself, and said she was well secured on board for her final flight. And the whole plane is watching me cry.

“… We just landed in Charlotte. Before the pilot moved an inch in Atlanta, he said, ‘Folks, today you’re going to get a history lesson. Seventy years ago in June, U.S. armed forces invaded Normandy.’ (Collins said he went on two to three minutes, giving specific dates, numbers and names.) ‘And then Army flight nurses were right in the midst of battle and the 806th landed at Normandy three days after D-Day. We are honored to have one of those nurses with us today. Ethel Guffey Simpson is flying home to Charlotte, to be laid to rest with her husband, Col. Richard Wright Simpson, also a WWII veteran. Her family, traveling with her, asked we say God bless our armed forces, and God bless the United States of America.’

“He was choking up the whole time, and when he finished … the plane erupted in applause. I went to thank him after the flight, and he handed me my note with his card. And then it made sense … he is Brig. Gen. David McMinn, chief of staff of the Texas Air National Guard. No other would have been more fitting to fly a fellow soldier. Ethel is leading the march for sure.”

Columnist: A thumbs up for the typewriter