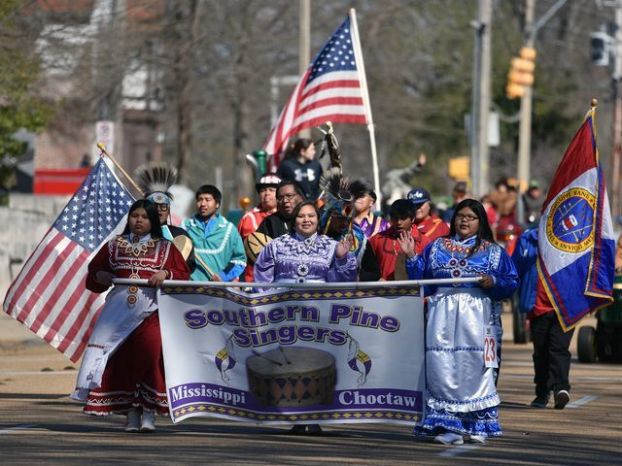 Members of a Choctaw Nation drum group perform in this undated handout photo. On Saturday, June 11, members of the Mississippi Band of Choctaw Indians are set to join the Juneteenth Community Festival in Lanett, Ala.

http://lagrangenews.com/wp-content/uploads/sites/37/2016/06/web1_drum-group.jpgMembers of a Choctaw Nation drum group perform in this undated handout photo. On Saturday, June 11, members of the Mississippi Band of Choctaw Indians are set to join the Juneteenth Community Festival in Lanett, Ala.

LANETT — Saturday, June 11, members of the Choctaw Nation, the Mississippi Band of Choctaw Indians, are set to join the Juneteenth Community Festival on the grounds of Goodsell United Methodist Church from 10 a.m. to 5 p.m.

The community festival is open to the public and is focused on celebrating freedom. The day will include live entertainment, children’s games, antique cars, health fair, food, storytelling and other activities. There is no fee to attend the festival.

The Juneteenth celebration is an alcohol- and drug-free family environment. Attendees are advised to bring a lawn chair or blanket to the festival grounds at Sixth Avenue and Cherry Drive in Lanett.

The Choctaw Indian Reservation consists of 35,000 acres of trust land scattered across 10 counties in east central Mississippi. In the early 16th century Europeans began settling that region of the United States. Following treaties and pacts, about 23 million acres of land was ceded by the Choctaws to the United States government and the region became part of Mississippi. The Choctaw Nation was the first American Indian tribe to be removed from its ancestral home to lands in Oklahoma.

The Choctaw culture is rich in family and community life. In addition to retaining its language, the Choctaws are known for their dance, drumming, beadwork, basketry, traditional clothing and cooking skills. Most community events include a traditional meal of hominy, frybread and fried chicken.

Stickball, played in many U.S. communities as lacrosse, has been a part of Choctaw life for hundreds of years. The game has even been used to settle disputes among American Indian communities.

The Mississippi Choctaws are proud to share their heritage, traditions and customs with the Greater Valley area, according to the group’s press release. Many cultures will be on exhibit at the Juneteenth Festival, organizers said.

Juneteenth dates to 1865 and commemorates the ending of slavery in the United States, specifically when Maj. Gen. Gordon Granger arrived in Galveston, Texas, on June 19 of that year with a band of Union soldiers to enforce the freeing of all slaves. The date was more than two years after the emancipation proclamation and two months after Confederate Gen. Robert E. Lee surrendered at the Appomattox Court House in Virginia.

For additional information on the Juneteenth 2016 celebration in Lanett, contact Trudye Johnson at 706-957-9722.