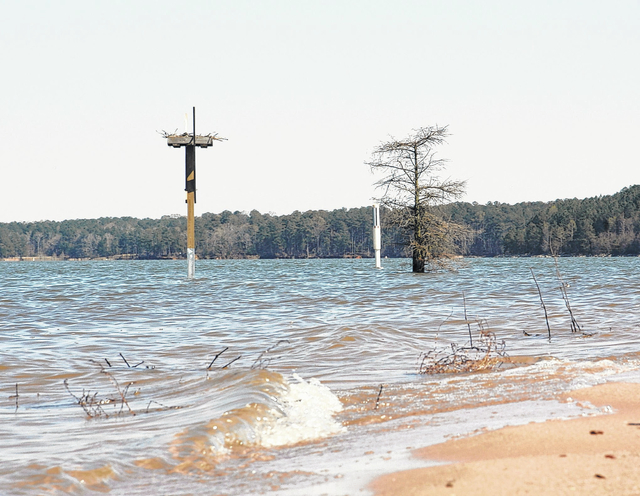 A view from the shore near West Point Dam shows the lake at about 633 feet above sea level in 2013. Stakeholders are now concerned after the Army Corps of Engineers quickly drew the lake down from 632 feet in January to 628 feet, despite drought conditions in northern areas stymieing water flow.

http://lagrangenews.com/wp-content/uploads/sites/37/2016/06/web1_0607FILElake.jpgA view from the shore near West Point Dam shows the lake at about 633 feet above sea level in 2013. Stakeholders are now concerned after the Army Corps of Engineers quickly drew the lake down from 632 feet in January to 628 feet, despite drought conditions in northern areas stymieing water flow.

LaGRANGE — Water levels at West Point Lake are expected to continue to fall over the next few weeks unless the area receives “significant rainfall,” according to the U.S. Army Corps of Engineers.

As of Monday, the lake’s surface sat at just over 631 feet above sea level, about four feet lower than its full summer pool level of 635, data shows.

In a press release in May, the Corps blamed “a lack of normal rainfall” for the reduced inflow to West Point Lake. In other words, drought conditions north of the lake have stymied river flows and failed to replenish water leaving the lake from West Point Dam.

Under the Corps’ interim water management plan, restrictions are placed on how much water can be stored versus released into the Apalachicola River for endangered species downstream. While the interim plan does not require water to be drawn from storage, it does limit the Corps ability to refill the lake, according to a news release from the corps.

James Emery, Troup County engineer and a member of the Apalachicola-Chattahoochee-Flint Stakeholders group, doesn’t agree with the Corps’ assessment of its own rules.

“I just think they misstated that,” he said. “For them to say it doesn’t require draw from storage, yes it does.”

Under the interim water management plan, the Corps is required to keep a set flow rate for the Apalachicola River, into which the Chattahoochee flows at the Georgia-Florida border. Endangered species of sturgeon and mussels live in the river, and the U.S. Fish and Wildlife Service works with the Corps to maintain the Apalachicola’s flow rate.

The Flint River, with its headwaters near the Atlanta airport, also flows into the Apalachicola. Unlike the Chattahoochee, the Flint has no dams or reservoirs. When the flow of the Flint slows down, the Corps draws from its reservoirs on the Chattahoochee — namely lakes Lanier, West Point and Walter F. George — to divert water to the Apalachicola and supplement the Flint’s weak flow.

There are two sets of very important numbers for the Corps’ operations on West Point Lake. In the winter, those numbers are 621 and 628 — the lower and upper thresholds of lake levels above sea level.

On Jan. 1, shortly after flooding that caused millions of dollars in local damage, West Point’s lake level was nearly 632 feet above sea level. That’s nearly 4 feet higher than the Corps wants the lake to be at that time of year, and in a matter of days, it released the 4 feet from the lake, sending the water downstream to the Apalachicola. The release brought the lake level to 628 feet above sea level, or the “top of conservation” level for the lake in the winter.

“They were getting huge flow, and nobody downstream wanted that,” Emery said, questioning why more water hadn’t been stored in the lake when it was available.

U.S. Rep. Lynn Westmoreland, who represents Troup County in Congress, wasn’t pleased about it either. In late May, the congressman wrote a letter to U.S. Army Col. Jon Chyka, who heads the Corps’ Mobile District, which includes West Point Lake.

Westmoreland wrote “to express my deep concerns and disappointment upon hearing the announcement that West Point Lake will not remain at full pool this summer as a direct result of the Mobile District’s decision to draw down the lake.”

The congressman went on to question the Corps’ decision to pull water from the reservoir when the upper Chattahoochee is already in a drought condition.

“Why has the Corps continued to generate (electricity) 24 hours a day recently, further draining West Point Lake as we enter the summer recreation season?” Westmoreland wrote.

Westmoreland also noted West Point Lake contributes between $153 million to $710 million in annual economic impact for the area, and was specifically designated by Congress as a general recreation lake.

He urged the colonel to meet with nonprofit groups that are working to protect the lake levels, but Emery, who is a member of one such group, said he’s not heard of any planned meeting.

“Right now I can’t even quite understand how they’re following their own rules,” Emery said of the Corps. “But more importantly, I think long term, is to get those rules changed so they don’t have to cause so much harm to this region in order to benefit another region.”