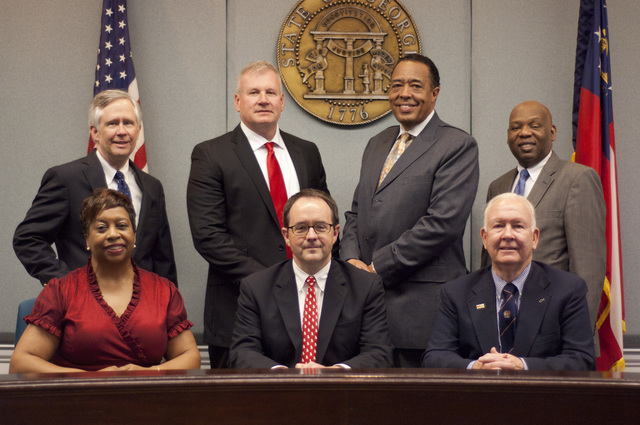 LaGrange Mayor Jim Thornton, center, and City Council, have narrowed their search for a new city manager to replace the late Tom Hall, who died suddenly earlier this year.

http://lagrangenews.com/wp-content/uploads/sites/37/2016/06/web1_CouncilWEB.jpgLaGrange Mayor Jim Thornton, center, and City Council, have narrowed their search for a new city manager to replace the late Tom Hall, who died suddenly earlier this year.

LaGRANGE — Elected city officials on Tuesday narrowed their search for a permanent city manager to replace the late Tom Hall, who died suddenly earlier this year.

“We want to assure the citizens of LaGrange that we are taking this search process very seriously, and we intend to hire the best available person to manage the city’s operations,” Thornton said in a statement.

The position was advertised in April and applications were received, with a submission deadline of May 20. Applications came from as far as California, Nebraska and Ohio, but the majority of applicants were from Georgia and immediately adjacent states, according to Thornton.

Most of the applicants are currently serving as city manager or assistant city manager in other similar size municipalities, and “many have very impressive credentials and experience,” Thornton said.

“After we have received the consultant’s interview reports, we will select those candidates that will be interviewed in person by the mayor and Council,” Thornton said. “Those interviews will be scheduled at a later date.”

To protect the privacy of the applicants involved, Georgia law provides that the mayor and Council will review applications and conduct interviews in executive session, and the City will not release the names of applicants until they are named as finalists.

“The law provides that we will release the names of up to three finalists and that those names be made public at least 14 days before a final vote is held on the selection,” Thornton said.

The city manager is LaGrange’s chief administrator, and oversees each department operated by the city. It is the only position directly hired by the mayor and Council.