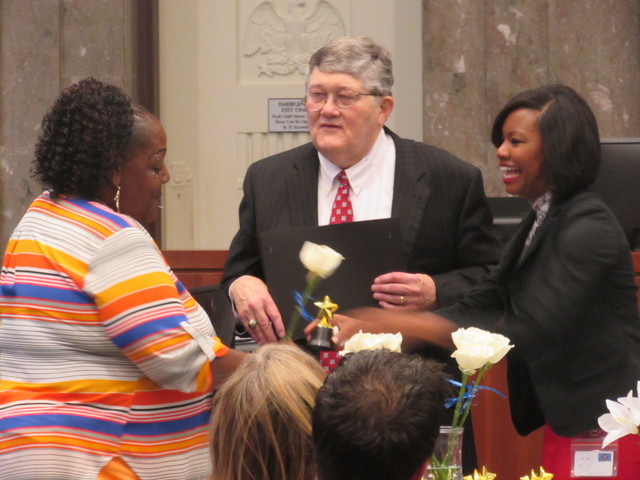 LaGRANGE — Susie Swann suffered from depression and was diagnosed with bipolar disorder shortly after her mother died when she was 16 years old.

It was not until decades later, when she was in her 40s, that the mental illness truly reared its ugly head causing her to turn to pills and alcohol, she said. It was a habit she had never had issues with before.

“I realized I had a problem when I woke up and I had to have a drink to get going,” she said.

Her house burned down in a fire about the same time her husband had a stroke, Swann explained. She also lost her job and started self-medicating herself with pills to sleep at night.

Eventually Swann hit rock bottom. She landed in jail and tried to take her life.

“I tried to commit suicide. I didn’t think there was help for me,” she said.

“It took me going to jail and a lot of legal problems before I realized that I never drank before I was 40 years old, but I always had mental health issues … it runs in my family,” she stated.

Swann’s close family, friends and even one of her therapists were a part of the dozens of guests at the inaugural Faces of Mental Health Graduation Ceremony on Tuesday afternoon inside the Troup County Juvenile Court building on Ridley Avenue.

Swann was one of seven people to accept a diploma and become a distinguished member of the first graduating class of the Troup County Adult Mental Health Court.

“You are in control of your lives. Find family and friends who can be a touchstone for you … who can help you … look around the room and remember the faces that are here today,” Thompson told the graduates. “Law enforcement officials, the district attorneys, judges … all these people are on your side. They are your cheerleaders. They are not here to punish you, they are here to help you.”

“You could tell that Judge (Quillian) Baldwin and (coordinator) Tiffany (Hutchinson) really cared about you,” Swann explained. ” … It was hard, but very fair. They treated everyone the same. If they had been any lighter, I might not have made it through the program.”

“A high percentage of people with mental illness get no treatment at all,” she stated.

In Georgia, people with mental illness usually end up behind bars in a state jail or prison instead of a medical facility with trained staff to tend to the real disorder, according to the Treatment Advocacy Center website.

In 2005, more than 92,600 inmates were behind bars around the state, the organization stated. More than 14,800 of those inmates suffered from some sort of severe mental crisis at the time.

As more mental institutions and programs are shut down around Georgia and the nation due to lack of funding, many with mental illness find themselves with nowhere to go.

LaGrange Public Safety Chief Lou Dekmar began sending all his officers through Crisis Intervention Training, which is now mandatory for everyone in the department.

“The training emphasizes on identification and de-escalations … reduction of force … with people in a mental health crisis,” explained Dekmar. “… A variety of the entities, from the state to the national level, have written these folks off … you started seeing significant homelessness and panhandling in our communities. Some (with mental illness) had violent tendencies … 25 percent of people who are fatally killed are mentally ill. Police (nationwide) ended up in deadly force situations.”

The faith community in Troup County was also alarmed by the statistics and asked Dekmar how they could help. The Adult Mental Health Court was formed soon after.

“When I first see them (program participants), they’re either in jail or in lock up,” explained Hutchinson. “So I am lucky to see them transform from that period to this point and graduate. I feel proud. I feel like a proud mama.”

Participants are required to attend counseling sessions, take medications, pass random drug tests, call in every day, check in with Judge Baldwin, among other things, Hutchinson said. Failure in any of those areas may result in the person being forced to write a paper, perform community service or face jail time.

But folks learn a lot too. One of the most helpful tools the program teaches participants is accountability and responsibility, Hutchinson stated.

“Counselors also give them coping skills to handle their problems, plus prescription medications for medical issues,” she added.

“It really does work and it really does change your life for the better,” said Swann. “I was really lost, and I didn’t even know it. But they (Mental Health Court) helped me get through it.”

There are currently 31 mental health courts across Georgia, according to Supreme Court Chief Justice Thompson.

Anyone wanting to learn more about the Troup County Adult Mental Health Court can contact Tiffany Hutchinson at 706-298-3613 or visit www.troupcountyga.org/accountability_courts.html.

Susie Swann proudly holds her diploma as she graduates from the Troup County Adult Mental Health Court program Tuesday afternoon in front of her family and friends.

http://lagrangenews.com/wp-content/uploads/sites/37/2016/06/web1_Graduation-1.5-1.jpgSusie Swann proudly holds her diploma as she graduates from the Troup County Adult Mental Health Court program Tuesday afternoon in front of her family and friends.