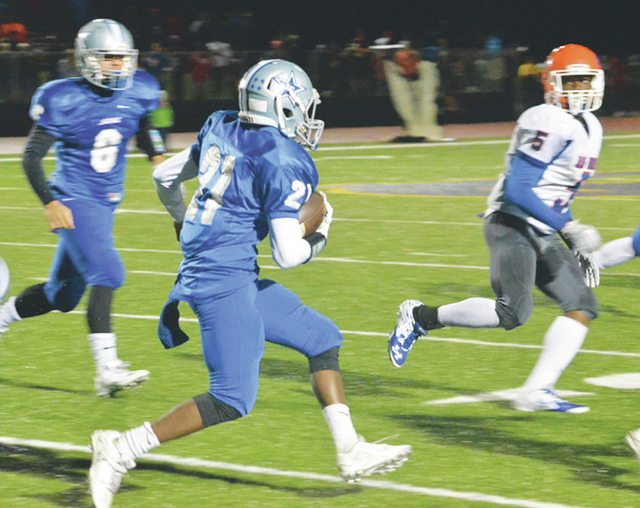 LAGRANGE – When the LaGrange Grangers take the field for their preseason opener on Aug. 5, they’ll have a new look on the offensive side of the football.

Gone are the bulk of the skill players from last year’s team, including most of the men who touched the ball at running back and wide receiver.

This summer, LaGrange head coach Dialleo Burks will be taking a good look at the men who are vying for playing time at those all-important positions.

Burks will also keep a close eye on the quarterbacks.

While senior LaPerion Perry is slated to be the Grangers’ quarterback, and he is coming off a phenomenal junior season, he is out of action at the moment after undergoing hip surgery recently.

All of the offensive skill players, veterans and newcomers alike, will get an opportunity to show what they can do in the coming weeks as LaGrange hosts a pair of seven-on-seven competitions.

At wide receiver, LaGrange was hit hard by graduation, with Mike Hardy and Andrew Askew both having moved on.

Hardy and Askew had big seasons catching passes from Perry, and they’re both preparing to play college football.

Among the players looking to step up and fill the void left by their departure is 6-foot-3 senior Jalen Wilson, who Burks said is receiving looks from multiple colleges.

Burks said Bo Russell “will be filling that other spot, along with Jamari Thrash, Colby Patton, and Amad Ogletree.”

Ogletree brings plenty of experience, and versatility, to the field.

Ogletree was the Grangers’ primary quarterback as a sophomore, and last year he moved to running back and excelled there.

This year, Ogletree will be a wide receiver, running back, and perhaps quarterback as well.

“He’ll serve in a lot of different spots,” Burks said.

Burks also said “we have a group of young guys that we’re grooming” at wide receiver.

LaGrange was also affected by graduation at the running-back position.

Gone are Undriel Copeland and Kimani Barnes who were both so effective last season, but Burks is high on the group of players who’ll be competing to carry the ball.

Among that group is senior James Clark, who saw significant playing time a year ago on offense, especially early in the season when some other players were out with injuries.

Ogletree also brings experience and play-making ability to the running-back spot, and Burks said DeAnthony Rachel and Miles Johnson will also get plenty of reps.

Burks also said some incoming freshmen have shown tremendous ability, and he’ll give them a chance to perform during the seven-on-sevens and the preseason games.

“I believe in putting them out there,” Burks said.

When LaGrange suits up for next week’s seven-on-seven competition, their most electrifying play-maker will be on the sidelines.

While Perry is expected to be ready to go when the regular season begins, he’ll be a spectator this summer, giving some other quarterbacks a chance to shine.

Ogletree has the most experience at quarterback, and Burks said sophomores Jacoby Smith and Nathan Chronic and freshman Charles Crawford “will get thrown in the fire. We’ll see what they can do.”

LaGrange will host a three-team, padded camp on June 15, and it will be at home for another seven-on-seven event on June 21.

LaGrange plays its season opener against Callaway on Aug. 19.

LaGrange’s DeAnthony Rachel, seen returning a kick against Columbus last season, will be one of the players working at running back this summer. Kevin Eckleberry | Daily News

http://lagrangenews.com/wp-content/uploads/sites/37/2016/06/web1_LHS-rachel.jpgLaGrange’s DeAnthony Rachel, seen returning a kick against Columbus last season, will be one of the players working at running back this summer. Kevin Eckleberry | Daily News