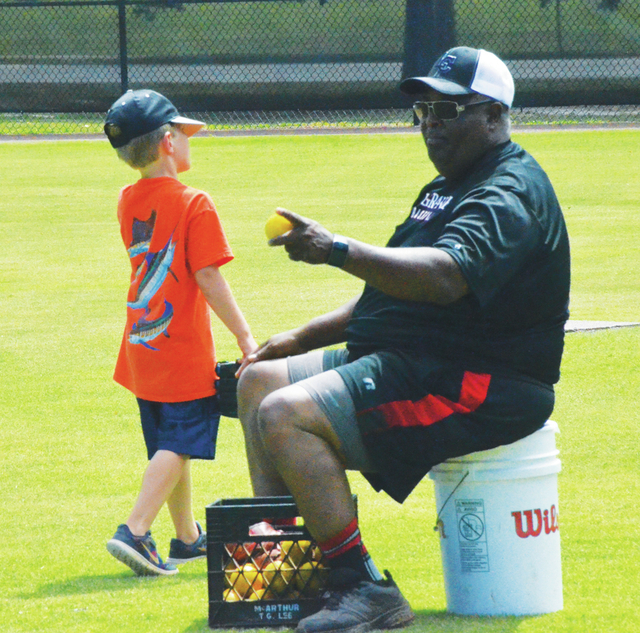 LAGRANGE – It’s a highlight of his year.

Al Bell has been helping out at the LaGrange College baseball camp since 2003, and in each of his years as an instructor, he has been asked to work with the youngest players.

He has been a teacher for more than 40 years, and for 34 of those years he has been a physical education teacher on the elementary-school level.

He loves working with young children, whether it’s at his school in DeKalb County, or at the LaGrange College camp he has assisted with for 14 years now.

There are two sessions of the LaGrange College camp, and the first one wrapped up on Friday, and the second one begins on Monday and runs through Friday.

Bell works with the campers who are 6-years-old and younger.

“I make it fun for them,” Bell said. “You say things just to motivate them. I love it.”

When Howard stepped down following the 2012 season, David Kelton took over as the head coach, and he was glad that Bell decided to remain a part of the camp.

“He’s the legend of these camps,” Kelton said.

Bell, who is also the public-address announcer for LaGrange College home football games, said it’s gratifying to see some of the campers he worked with go on to succeed in the sport.

He recalls running into one of the former campers who plays college baseball at the University of Georgia, and it was an emotional moment.

“I went down, and this big guy came toward me, about 6-3,” Bell said. “He started crying. He hugged me. That meant so much. He said you are the man. I always remembered you. That choked me up. I didn’t expect that.”

Bell will soon retire from teaching, but don’t expect him to stop coming to the camp.

“I love the sport,” he said. “And I love working with kids.”

Al Bell has been helping out at the LaGrange College baseball camp since 2003. Kevin Eckleberry | Daily News

http://lagrangenews.com/wp-content/uploads/sites/37/2016/06/web1_LCcamp2.jpgAl Bell has been helping out at the LaGrange College baseball camp since 2003. Kevin Eckleberry | Daily News