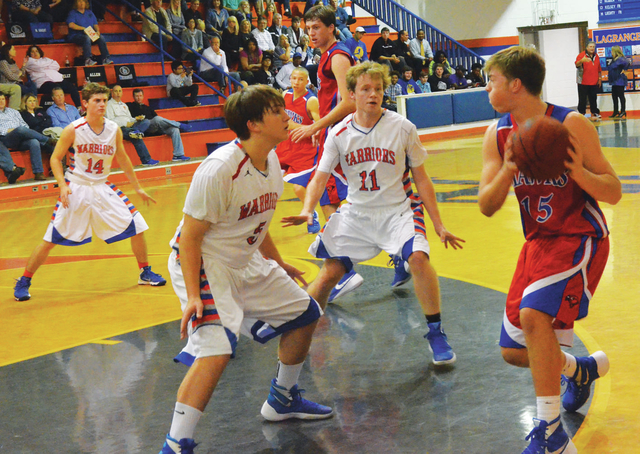 LAGRANGE – Being a part of a youth basketball camp is nothing new for Britt Gaylor.

He’s been around them his whole life.

When he was younger, he was first a participant in camps offered by his father Jim Gaylor, and later on he started helping his dad out as an instructor.

“I grew up in them, and once I got to a certain age I had to work them,” Gaylor said.

Now, Gaylor is in charge of his own youth camp, and he loves it.

Gaylor, the boys’ head basketball coach at LaGrange Academy, offers a youth camp each summer, and this year’s camp wrapped up on Friday.

“This is my favorite time of the year, working with them, and not having to worry about school stuff,” Gaylor said. “You just worry about the camp. It’s fun.”

Gaylor was originally going to have two separate week-long camp sessions, but he decided to consolidate them into a one-week camp, and he said “about 30 kids” came out during the week.

Gaylor’s players on the LaGrange Academy basketball team lended a hand as instructors.

“We had a really good week,” he said. “We had all of our guys in and out of here, helping out. It’s been great.”

Much as Gaylor feels he benefited during his younger days by serving as an instructor in different camps, he believes the experience will help his players as well.

“One way to learn is by teaching,” he said. “It’s helpful for them to get out there and teach the skills we want them to learn, and they’ve picked it up better that way.”

Gaylor said all of the campers were eager to learn.

“It’s been really good,” he said. “They’ve been fired up to learn. The good thing is, their energy level has been up.”

Gaylor said it’s great for the campers, most of whom are students at LaGrange Academy, to get to know the basketball players.

One of the players who helped out during the week is Lincoln Anderson, a standout on the 2015-2016 team that reached the quarterfinals of the GISA state tournament.

Anderson said the week was a blast.

“It’s been fun, meeting the kids,” Anderson said. “They know me from coming to school at LaGrange Academy. They’ve seen me around. It’s good to work with them.”